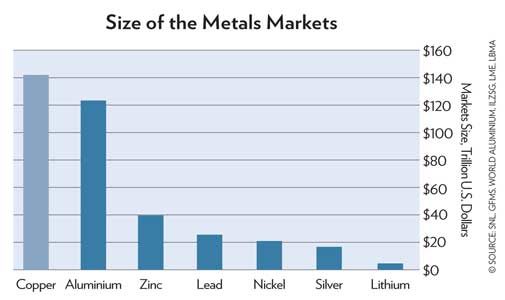 Governments around the world are rushing to secure copper supplies. Why? Just look at the chart.

The global copper market is bigger than the market for any other industrial metal. The value of copper bought and sold around the world is seven times that of other metals, like nickel…and about 30 times that of the global market for lithium.

Historically, much of that copper demand has been driven by infrastructure building. Copper is essential in making the wire used to transmit electricity. But the race for this key metal is about to get even more heated…because of the next wave of development in electricity infrastructure.

I’m talking about the widespread roll-out of electric vehicles (EVs).

And that’s just the start. If we move to fully battery-powered vehicles, 182 pounds of copper will be needed to make one car. That’s a 260% increase in copper requirements.

When the supply crunch hits—which could be very soon—it’s going to cause a copper price spike that will lift all stocks in this sector.

Privacy is one of the few topics that Democrats and Republicans largely agree on. Their conclusion is that you shouldn’t have any.

That’s especially true when it comes to searches at U.S. borders. In 2017, border officials inspected more than 30,000 electronic devices.

Keep in mind that a tech-savvy border agent may ask for your login to iTunes, iCloud, or other cloud backup service.

So the best practice to safeguard your electronic privacy is to travel internationally with a “burner” phone with no data on it, and a disposable SIM card you throw away before you reach a border crossing.

Profit When the Markets Talk Turkey

Even before its current crisis, the Turkish lira was among the world’s worst-performing currencies, dropping by half against the U.S. dollar in the past 12 months.

Turkey’s private and public sector debt is high, with $350 billion of it borrowed in U.S. dollars from foreign banks to take advantage of low interest rates. Inﬂation is over 15%, ﬁve times the average for the country’s peers.

But Turkey’s problems are about to become an opportunity for foreign investors. Here’s why.

As an important, mid-sized economy closely integrated with Europe and global trade, Turkey is full of foreign banks, including Spain’s BBVA, Italy’s UniCredit, and France’s BNP Paribas. If Turkish borrowers begin to default on their loans, these banks will suffer, just as they did when Greece, Italy, and other countries faced similar problems after the ﬁnancial crisis of 2008.

And, as always, Turkey’s problems are having an immediate impact on other mid-sized economies. The Russian ruble, Australian dollar, South African rand, and the Mexican and Argentine pesos are falling fast, as investors looking for a safe haven ﬂee to the dollar, Swiss franc, and Japanese yen.

When the Turkish crisis abates—as it must eventually—these assets will rise in value in U.S. dollar terms. The same is true of assets in every country now suffering because of contagion from the Turkish crisis. That’s why crises in global “emerging markets” are actually investment opportunities.

How to Turn Nickel Into Dollars

Nickel needs to be on your radar today…

The metal interested a lot of investors recently, when Elon Musk said that the batteries used in Tesla’s EVs are reliant on nickel and, to a lesser degree, graphite. Musk also said that he wants to add as much nickel as he can to batteries in future.

Specifically, he wants to add 33% more nickel into each battery. This comes at a time when overall demand for EV batteries is rocketing.

Remember, nickel is the primary input for many of these batteries…and Musk is leading the charge to put more nickel into each and every EV battery.

What battery makers need is a rare type of nickel known as nickel sulfide, which comes with a chemistry that’s much easier to convert into input products for batteries.

Aside from Australia and Canada, the only place on earth with large nickel sulfide deposits is Russia—a source that could be cut off from the rest of the world by international sanctions. Which all means that now is the perfect time to add some nickel expo-sure to your portfolio.

When it comes to looking for ways to ramp up the growth of your investment portfolio, we tend to first look to the stock market. You can even do it on your smartphone.

But it’s important to diversify your portfolio in such a way that it includes more than just stocks.

When, not if, the market crashes, the stocks in your portfolio will take a beating. Years could pass before they return to their pre-crash levels

It’s important to diversify your portfolio.

However, the value of collectibles isn’t directly correlated to the market. Stocks can plummet in value, but collectibles will make gains.

Not surprisingly, collectibles are mostly held in the hands of avid collectors and fans. They don’t sell their items just because the economy is weak or the stock market tanks. They hold on for years. This helps to keep prices steadily rising.

Collectibles can cover a wide swath of rare, tangible items for investment. Like, say, an iconic jacket worn by the star in a major motion picture. More common items include stamps, fine art, antiques, watches, cars, books, coins, and wine.

For instance, Liv-ex tracks the prices of a variety of fine wines and actually publishes a series of indices. Over the past year the Fine Wine Index 1000 has soared 9.9%, and it has increased 34.5% over the past five years. Not a bad return.

Collectibles offer another avenue for increasing your wealth, while shielding you from overall market volatility that can wipe out years of gains. Take steps today to explore this unique asset class.

Business as Usual in Obrador’s Mexico

His election on July 1 saw the 64-year-old take power in a landslide popular vote. Obrador called his own election a “sea change in Mexican history,” up there with independence from Spain and the revolution of 1910.

Commonly called just AMLO for short, he’s made a lot of promises over the years. Some fear his radical past, calling him a Chávez-like “Tropical Messiah,” after the late president of crisis-ridden Venezuela.

Other analysts figure he won’t be much of a radical now that he’s in power.

Now the dust has settled. And as the headlines die away, I’ll tell you what I think it means for international property investors: nothing, really.

The election is over. Everyone is moving on.

The six months in the lead-up to any Mexican election are generally a period when it’s tough for people to get things done. There is a lot of uncertainty. Then someone wins, and everyone gets back to business.

If anything, I think things will get better in Mexico.

If anything, I think things will get better in Mexico. Progress and reforms proved difficult in the country before the elections, because then-President Peña Nieto was so intensely unpopular. With approval ratings as low as 12%, his government just couldn’t function. I have never before experienced such universal disdain for a leader. It dampened optimism.

I’ll put it to you like this: In the last decade, I’ve made huge profits in Mexico. During that period, the country wasn’t without its troubles. In a month or so I’ll be back in Mexico, going to the Riviera Maya…Cabo…San Miguel de Allende.

And when I’m there, I’ll be doing business as usual.