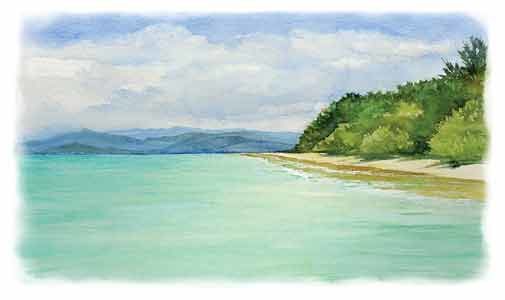 A ferry ride from Bali brings you to the quiet and car-free Gili islands. ©Colleen Clapp

On the surface, the sea is like what you see in travel brochures..ripples of bright blue shimmer with turquoise and green as the sun is reflected off the water. But the true highlights of the Gili Islands lie under the waves…

A curious sea turtle swims alongside me. Butterfish dart from pockets of bright red, green, and yellow coral. As I hold out my arm, small fish swim between my fingers.
A large black-and-white eel curves through the seaweed.

Not so long ago, the Gili Islands were semi-deserted, somewhere only occasional travelers visited. Now they’re among the most popular desti-nations in Indonesia. But with just a few tips, you can still savor this island paradise as it once was, while benefiting from new amenities and services.

The Gilis are near the much larger Lombok island. To get to them, you leave from the port of Padang Bai in Bali. A two-hour boat ride later, you’ll arrive at Gili Trawangan.

No cars, no motorbikes. Just laidback walking, push-bikes, and horse-drawn carts. The islands are small…you can walk around Trawangan island, the biggest, in two hours, and ride a push-bike around it in less than one. Gili Trawangan is the most developed of the three islands, while Gili Meno and Gili Air still have that deserted-island feel to them.

It’s easy to make your way to Gili Meno via smaller boats, but Gili Air is serviced by the same fast boats as Gili Trawangan. Both islands have accom-modation and dining options, great for splitting your time among the islands and making the most of such a beautiful part of the world.

On Gili Air, the Waterfront Bungalows offer a sensational view of Mt. Rinjani, the second-largest volcano in Indonesia, at sunrise. Rooms start at $110, and the hotel also offers Open Diving courses from $90.

Back on Gili Trawangan with the snorkeling behind me, I head to the island’s west side, where the Exile Bar’s colorful bean bags and cold beer ($2) beckon. I watch the oranges and reds of a glorious sunset blend into the Bali Sea. Another “pinch myself ” moment as an expat in Bali.

“Fewer than 10 of these macabre grave decorations exist in Ireland, designed to remind us that, regardless of our standing in life, death is the universal—and somewhat icky—leveler.”

Grand Luxury in Chiriquí
“The history of David in Panama can be found inside the walls of the gated cemetery in the historic part of this Panamanian city,” writes IL Chiriquí Correspondent Nanette Witmer. “Walking through the entry exposes you to the hundreds of mausoleums, each one unique, bearing the names of some of David’s best-known families. One is built as a two-story structure with a winding staircase inside. Climbing it rewards the traveler with a 360-degree view of the cemetery.”

Frangipani Shade in Malaysia
“The Protestant Cemetery in the heart of George Town, Penang is the ﬁnal resting place of Francis Light,” writes IL Southeast Asia Correspondent Kirsten Raccuia. “In 1786 while working with the British East India Company, he leased the island from the Sultan of Kedah and renamed it Prince of Wales Island. “The cemetery is small, but beautiful; the graves are shaded by rows of frangipani trees, as if to shelter the dead from Malaysia’s tropical sunlight.”