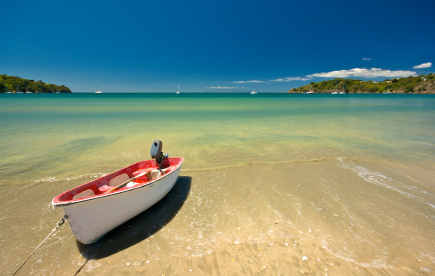 Nothing beats island life, especially when you share your island with world-class wineries, oyster farms, restaurants and endless bustling cafes. All this, and you’re just 30 minutes away from the modern city of Auckland in New Zealand.

Thirty years ago the dramatically beautiful island of Waiheke, off the coast of New Zealand’s North Island, was a remote location serviced by a slow ferry, it had one main general store, a local pub and a sprinkling of “Kiwi batches” (small vacation homes).

Fifteen years ago the first real surge started, with many locals selling their homes and land and the early birds from Auckland beginning to pour in. From here began the development of wineries—over 30. Soon after, suitable amenities arrived, giving the island total self-sufficiency with everything from medical centers to yoga clubs to hardware superstores.

Connected by high-speed ferries 20 times a day, Waiheke is fast becoming an internationally-recognized luxury destination. It was featured last year in Frommers Top 12 World Destinations. But prices have yet to catch up.

In recent years the style of restaurants and gourmet stores has changed to serve a more discerning clientele. Future development is also taking a luxury direction with the planned arrival of the five-star Landmark hotel.

Waiheke has its own micro-climate—better than that of Auckland’s—with less rainfall and more sunshine. And this sub-tropical paradise, with 62 miles of beachfront, white sandy beaches, and sun-drenched vineyards, is home to some breathtaking real estate.

Aucklanders regularly leave the city for Waiheke’s beaches, restaurants, markets, bars and wineries, swelling its normal population of 8,000 to 30,000-plus during the summer. This number climbs higher again during the many food, wine and music festivals that take place on the island throughout the year.

The ferry from Auckland arrives at the western end of the island in the picturesque bay of Matiatia, where dolphins often greet arrivals as the island comes into view. You can hire transport on the island, choosing among cars, bikes, scooters or Harleys. But if you prefer to bring your own, a car ferry also operates.

The island is divided into two coasts served by one single main road running through the center. You can drive the length of the island in 40 minutes past vineyards, beaches and lookouts.

The north-facing beaches are less tidal and better oriented for the Southern-Hemisphere sunshine. They typically carry higher real estate prices. The most popular beaches there are Oneroa, Palm Beach and Onetangi. The beaches on the southern coast enjoy views back to the city and are typically less developed. It is here you find larger blocks of development.

Thanks to the recent downturn in New Zealand real estate, it’s still possible to find some real bargains. The national market has started moving upward again, but there are still some owners of second and third homes who can no longer afford to hold their Waiheke retreats and are selling now at bargain prices.

It is easy to predict where prices will go from here. Given Waiheke’s past progress and its growing international exposure, it won’t be long before the entry-level prices surge again. This island represents some very attractive property opportunities—which, if you select your property wisely, can still generate rental income.

There are few locations in the developed world that offer this quality of life and scenic beauty at near emerging-market prices.

What used to be an island of alternative lifestyles for some Aucklanders is now host to a remarkable array of vineyards and cliff-top restaurants. Among them is the internationally-acclaimed Stoneyridge Vineyard, considered one of the top 10 wineries in the world, where well-heeled diners arrive by helicopter.

Stoneyridge produces the famous Bordeaux-style Larose, as seen in the world’s top 100 wines list. It was awarded a score of 93 to 95 by Robert Parker. Similarly ranked wines such as Latour ‘07 and Lafite-Rothschild ’07, which both scored 90 to 93, are priced at $289 to $505 per bottle. A bottle of Larose ’08 is around $144 and is considered an excellent investment opportunity by the case or by the barrel.

Editor’s Note: New Zealand has just been named as the fifth best place in the world to retire in IL’s annual Global Retirement Index.