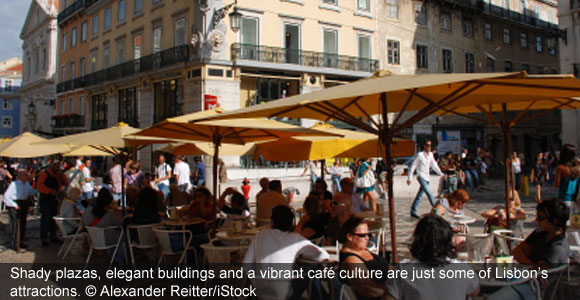 Laundry is hanging in vivid, postcard style above bougainvillea-draped walls. Built on one of Lisbon’s seven hills, this is Alfama, my favorite Lisbon neighborhood. Walking through the old becos, the slim cobbled alleyways that lead me up and down ancient hills, I hear fado, the beautifully melancholic, traditional music of Portugal, from a neighbor’s window.

The Portuguese capital is all about romantic views, secret neighborhoods, and faded grandeur. The houses here are clad in intricate tiles to reﬂect the sun’s heat, and it seems as if the city here wears its beauty inside out.

Originally from Texas, I moved into the heart of the old Moorish part of the city at the beginning of 2011, renting a small apartment with a tiny and it was the perfect introduction to the city. Alfama is reminiscent of the North African heritage of southern Spanish cities like Seville and Granada.

Lisbon’s central neighborhoods sweep down to the old port in elegant boulevards, rebuilt after the 1755 earthquake in an elegant style known as “Pombaline.” Into the mix you have late Gothic architecture as well, and the city is home to one of Europe’s largest plazas, Terreiro do Paço.

“There is a wonderful rhythm to life.”

Yellow trams from another era climb slowly past medieval cathedrals, delicious pastry shops, and haphazard stacks of bacalhau—dried, salted codﬁsh—outside traditional grocers. My head is constantly turning to take in the rich array of markets and boutiques, esplanades and plazas, fado singers and street performers. But there are so many cathedrals around  Alfama, around  Lisbon, around Portugal—I always know what time it is by the bells.

The city’s wild, river-ocean atmosphere has affected the children here so that they never tire, and they rocket up and down these steep hills and stairs, yelling with smiles. Built by the Moors to create natural air conditioning, the buildings in Alfama are clustered together over narrow streets, and the sun has a hard time ﬁnding its way into the apartments. Unless you’re on the top ﬂoor of the building, the interior spaces can be dark.

To combat the lack of indoor sun, locals sun themselves on the miradouros (“lookout points”), several of which can be found in Alfama. The people of Lisbon, known as alfacinhas (“little lettuces”) are proud of the miradouros and their cinematic views of the city and the Tagus River. In Alfama I recommend the Portas do Sol, with a nice esplanade and a kiosk selling pastries and coffee.

Monthly Budget for Living in Lisbon

Rent: $550 for a one-bedroom apartment

There is a wonderful rhythm to life in Alfama. Old men gather to smoke every morning at tiny hole-in-the-wall tascas(“bar/cafés”). You’ll know when you’re at an authentic tasca—an espresso will cost you just 65 cents. In the Starbucks downtown, you’ll pay double.  Portuguese people are coffee drinkers, and everywhere you go, you’ll ﬁnd that even the cheapest coffee is of good quality. An espresso with a bit of milk is a pingado, and instead of ordering a cappuccino, ask for a meia da leite (“half milk”).

Portuguese pastries, both sweet and savory, are probably the most delicious I’ve ever tried, and I eagerly scoot out of the house each morning to feed my addiction at one of the many cafés and bakeries. They are artful concoctions of egg, custard, maybe coconut or almonds, stuffed into a perfectly ﬂaky dough—each for around a buck. The general rule I’ve found is that the smaller the café, the better the pastries and the stronger the coffee.

By 1 p.m. locals and tourists alike are having happy, sunny lunches of ﬁzzy vinho verde, the local white wine, or sangría with grilled sardines and octopus salad. All for less than $13. As night comes, the fado bars and neighborhood restaurants open for business. You’ll get a traditional show for an entry of around $5.

After ﬁve months living in Alfama, I moved to the peaceful suburb of Oeiras to be closer to the water. I wanted to be able to wake up and head straight to the coast. Here I found everything I had originally wanted when I came to Portugal—including my very own beach.

From the city center, it’s a 20-minute train ride along the sparkling coastline to Oeiras, where ﬁgs, pomegranates, plums, limes, kiwis, and bananas grow wild from the sidewalks, perfuming the air. The streets here are level, and though Lisbon’s panoramic views are worth the climb, it’s a nice change that in Oeiras the only climbing I have are the 12 wooden steps up to my front door.

Each one of Lisbon’s markets is an adventure where you’ll find everything from fresh fish to antique lamps:

Mercado da Ribeira, Mon.-Sat., 7 a.m.-1 p.m.: Explore the city’s biggest market opposite the Cais do Sodré station, where the grand structure of the Mercado da Ribeira has been standing since 1885. Once you’ve gone through the vegetables, butchers, and flowers vendors, smell your way toward the fish stalls, where creatures from the depths of the ocean are on display, eyes staring, sharp teeth grinning, tentacles reaching.

Mouraria Shopping Center, Largo Martim Moniz, Mon.- Sat., 8 a.m.-6 p.m.: This fascinating underground universe is where you’ll find everything you need to cook up an exotic feast. You’ll be dizzy with the impressive variety of Indian, Asian, and African groceries, clothing, and movies on offer at this multi-level shopping mall. Hint: Try the smallest shops first for the cheapest prices.

Feira da Ladra (“Thieves Market”), Campo de Santa Clara, tourist tram 28; Tues.-Sat., approx. 8 a.m.-5 p.m.: This spot is a flea market extraordinaire near the Santa Engrácia church in Alfama, where anyone is allowed to sell anything. When the bargain hunt is over, retreat into the hidden-away Santa Clara kiosk café for a pingado and lovely river views.

My apartment is in part of a two-story villa and costs $500 a month, with gleaming wooden ﬂoors, a ﬁreplace, and colorfully- tiled kitchen and bathroom. I’ve two balconies, one in the kitchen overlooking a back garden, and a lovely wrap-around balcony in the front, offering me a view of the tree-lined avenues and the water.

The nearest beach is only an eight-minute walk from my house. And from there, paved paths take you all the way to popular Carcavelos beach, and another at Paço do Arcos. Everything I need here is just steps away at one of the three grocery chains, and there are two shopping malls with “hypermarkets” on the outskirts of Oeiras. There’s a café/bakery a few blocks away that offers a delicious, traditional lunch special each day for the unbeatable price of $6, something you’d never ﬁnd in the city center.

Wine is the drink of choice here in Lisbon, and to purchase a good-quality wine at a grocery store costs no more than $2.50.

The funny thing about living in Lisbon is the lack of accessible riverside. After all, I came to Portugal to be by the water, the ocean. But Lisbon actually lies along the Tagus River, and only as you move west along the coast toward Cascais do you get pure ocean. The beach in Oeiras is a mix of river and ocean waters, but I need only to walk along the water’s edge about 15 minutes to Carcavelos beach for a more purely ocean water experience.

In Lisbon, you certainly do have pleasant waterfront bars and restaurants, from where you can watch the building-sized cruise ships arrive. And from my apartment in Alfama, I could hear their long, heavy horns as they park along the docks at Santa Apolónia. I’m thrilled to have enjoyed my “big city” experience…and happy now, too, in Oeiras. I feel that I’m experiencing the best of Portugal…maybe the best of the world…