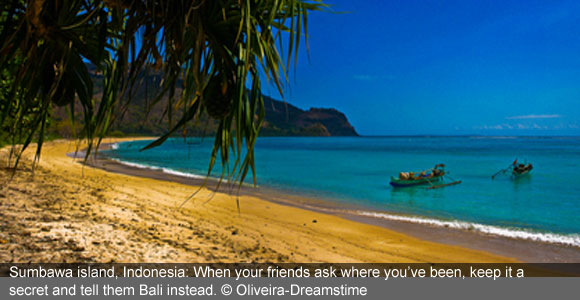 In the middle of the Lesser Sunda Islands, in the Flores Sea, lies the island of Sumbawa. It’s a magical island, beautiful, traditional, and one of Indonesia’s best preserved. And the warm, turquoise waters surrounding it are a relaxing 90 F.

Surfers and divers have been coming here since the 1960s; it’s a mecca for both sports. They stay for months, returning lean, tanned, and relaxed. When their friends back home ask where they’ve been, they often lie and say Bali… But this island’s days as a secret paradise are coming to an end.

Recently-signed maritime protection treaties and plans for a festival to celebrate all things Sumbawan will soon put it on tourist radars. But you can still get here before it goes mainstream. Sumbawa’s north and central coasts are where the diving, snorkeling, and swimming take place. The south and southwest of the island are where the surfers head. The north coast also has the capital, Sumbawa Besar, with its airport.

You may well fly into Sumbawa here. Check into one of Sumbawa Besar’s clean, simple hotels to enjoy good infrastructure, Internet, and the nice beaches, totally untouched by tourism. I stayed at the Samawa Seaside Cottages, as it had a wreck just 50 feet from shore that you could dive. (You can find out more here.)

Just outside town is the fishing village of Pantai Goa, where freshly-grilled squid, giant prawns, and local fish served from a stall on the beach cost $3. But don’t linger in the capital, because the action is elsewhere…

The south and southwest have the big surf, and the tiny towns of Maluk, Luniuk, and Sekongkang cater to the surfers, who arrive by the VW Beetle-load. This part of the island isn’t easy to reach, as the roads are unsealed. But the pickup trucks, which act as buses, and the four-wheel-drives, which attack the roads in low gear, will get you there.

“Life here is amazingly simple, and that’s part of its attraction.”

You’ll pass numerous kampongs (villages) along the way where food and water aren’t sold, so make sure to take your own. And note that the tracks are often closed during the monsoon season, in the months of November and March. Home stays and beachfront cabins along here can cost as little as $5 a night and food in the village as little as $1.

Due to the area’s remoteness you can’t book accommodation online—you just turn up and see what’s available. It reminded me of a time and place before Internet or mobile phones. Life here is amazingly simple, and that’s part of Sumbawa’s attraction—it’s actually what keeps you coming back. Eastern Sumbawa is pristine, and the hikes in and around the area are simply stunning. Bima City—the island’s largest city, with a population of 142,000—is here.

The Bima, as the locals call themselves, can trace their ancestry back to the 11th century. Off the eastern shore, right where Mount Malaka and Mount Doworo act as a welcoming gate, you’ll see the island of Komodo. Once you’ve hired a guide you can easily get a boat to take you across. But don’t attempt Komodo on your own.

It’s easy to get lost, and although the island has some great hiking trails, it also has lots of extremely large Komodo dragons. (If you’ve seen the latest James Bond film, Skyfall, you’ll know exactly what I mean.) A number of other, smaller islands also surround Sumbawa, and they’re all reachable by canoe or boat. Satonda Island has a cool, central, crater lake and is one of the area’s many top diving sites.

If you spend any time here you’ll notice a large colony of fruit bats that also calls this magical place home. Moyo Island also has a large freshwater lake and more fruit bats. Most of the island is a nature preserve. The island has some great treks through virgin rainforest, eventually leading to swimming holes and waterfalls.

There are a two ways you can get to Sumbawa. Boats from Lombok Island are still a popular way in, landing at Poto Tano. It takes around an hour. You can also fly to the capital, Sumbawa Besar, as well as to Bima on the island’s east coast. Flight time from Bali is just under an hour.