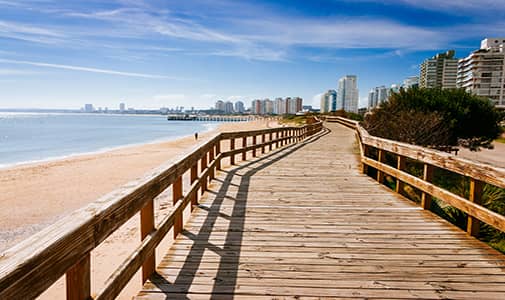 Choosing a retirement country deserves research and self-reflection. Everyone has their own priorities.

To help your process, I offer, what I consider, five good reasons to retire in Uruguay.

1. A Retirement Haven That’s off the Beaten Path

If you’re the adventurous type, looking for a retirement destination that’s off the beaten path, Uruguay may be just the ticket.

If you’re from North America or Europe, the seasons will be opposite from what you’re used to. January will come in summer and August in winter. The stars you’ll see at night will be different, too.

Even some of Uruguay’s traditions may be different than what you expect. For example, about a third of Uruguayans are descendants of Italian immigrants. So when it comes to pasta, opera, and winemaking, Uruguayans know what they’re doing.

Then, there’s the different wildlife you’ll see in Uruguay. Have you ever seen a ñandú (Rhea americana)? It’s the South American cousin to the emu and ostrich. Or how about a carpincho (capybara)? It looks just like a guinea pig but can grow to more than 100 pounds.

When you’re in Uruguay, you’ll know you’re not in Kansas (or wherever you’re from) anymore.

Whether your dream retirement involves city life, beach life, or country life, you can find it in Uruguay.

In Montevideo, you find the greatest variety of dining, entertainment, and social opportunities, as well as Uruguay’s largest international community.

In addition to retired expats, you’ll meet English-speakers from all over the world including English-teachers, diplomats, and employees of international companies with a presence in Uruguay.

As an expat in Montevideo, you can choose from a range of interesting places to meet friends for lunch, coffee, or dinner. Entertainment options include seeing a movie (often with showings in English), club music, or attending a performance of the Montevideo Philharmonic Orchestra.

Eighty-eight miles East of Montevideo, is Punta del Este, the most developed beach resort in Uruguay.

Punta del Este attracts summer beach-goers from many walks of life. During the peak of high season, the local airport fills with private jets and the harbor fills with visiting boats, including large yachts.

As an expat living in Punta del Este, you may enjoy the beach, tennis, or golf. Nightlife ranges from pizza and bowling to fine dining followed by an art event.

When summer passes and the vacationers and snowbirds leave, Punta del Este gets quiet. So quiet they turn off some of the traffic lights. Also, prices for most goods and services are higher in Punta del Este than in Montevideo. While a couple can live in Punta del Este on $3,000 per month (and some do), most expats spend significantly more.

With that said, you’ll find the most retired expats in and near Punta del Este than anyplace outside of Montevideo.

Between Montevideo and Punta del Este, you’ll find two smaller beach towns popular with expats. One is Atlántida, with its many trees and golden-sand beaches. Another is Piriápolis, known for its hills, Mediterranean feel, and boat harbor.

Like Punta del Este, summers are busy with vacationers and part-timers and winters are quiet. Many like the rhythm of the year, with lots of socializing in the summer followed by quieter winter months, perfect for walking the dog on the beach, lunching with close friends, and reading by the fire in the evening.

As an expat retiree living in a rural town or on your own gentleman’s farm, you may find yourself buying fresh eggs or homemade cheese from your neighbors; barbecuing with visiting friends; and enjoying the amazing display of stars at night.

When I ask expats what they like best about living in Uruguay, the answer usually includes some aspect of the local culture.

One facet of Uruguayan culture I really appreciate is the value placed on inclusiveness.

It seems a real effort is made to give as many people as possible access to the good things in life. It’s reflected in the fact that Uruguay has more of a middle class than anyplace else in Latin America.

You’ll find well-kept public spaces, such as plazas, large parks, and recreational facilities in cities across the country.

All beaches in Uruguay are public and readily accessible. In places like Punta del Este, local services workers enjoy the same beaches and resort atmosphere as energy-industry tycoons and supermodels.

The two top performance theaters in Montevideo, the Solís Theatre and Adela Reta National Auditorium SODRE, schedule occasional free and low-cost events so that everyone who desires can enjoy a night of chamber music or take their kids to see a production like the Nutcracker.

In Uruguay, just about everyone who works can take a vacation. That’s because most workers get 20 consecutive days of vacation time per year with double pay. It enables them to pay their household bills with money left over to really take a vacation.

In Uruguay, quality healthcare at a reasonable cost is a reality, thanks to private hospital plans known as mutualistas.

With a mutualista, you enter into a membership agreement directly with a hospital that provides all your medical services. It’s a straightforward health care solution with no tricky terms.

Hospitals that offer mutualistas provide responsible care to members for less than $100 per month plus a small co-payment when you visit a doctor or get a test. As private businesses, each hospital sets its own acceptance standards for age and preexisting conditions. Some are stricter than others.

The health care option with no restrictions for age or preexisting conditions is Uruguay’s public healthcare system ASSE (The Administration of State Health Services). It’s available to any expat retiree who becomes a legal resident of Uruguay. The monthly cost is similar to a mutualista.

While a mutualista is usually the preferred option for retired expats, ASSE can make sense for those who need specialized care or drugs only available through the university hospital (part of ASSE) or who live in rural areas, where ASSE is often the best option.

5. A Clear Road Map to Residency and Citizenship

As mentioned, Uruguay doesn’t require a large fee or investment to become a resident or citizen. The basic qualifications to become a resident retiree are simple: pass a criminal background check and have enough retirement income to support yourself (often about $1,500 for a single person).

In Montevideo and Punta del Este, you’ll find experienced English-speaking relocation specialists. They’re set up to guide you through the residency process, help sign you up for a health plan, open a bank account, or provide translation services when you need it.