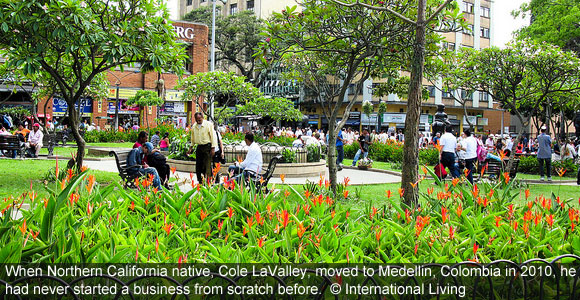 When Northern California native, Cole LaValley, moved to Medellin, Colombia in 2010, he had never started a business from scratch before.

“Do It As Soon As You Can”
Names: Quentin and Wyona McKay
Ages: 41 and 39
Living in: Roatan, Honduras
Business: Coffee House

Quentin and Wyona McKay wanted to move to paradise. They wanted to exchange their hectic life for a simpler, more fulfilling one…to own their own business in an exotic tropical location and work for themselves doing something they enjoy.

“We had enough of painful winters in Edmonton, Alberta,” says Wyona. “It has been a dream of ours for the past 15-plus years. So three years ago we put ourselves on a five-year plan where any vacation was a research trip to a destination that had possible investment opportunities for us. We visited Punta Cana, on the Mayan Riviera in Mexico, and were in the middle of planning a trip to Puerto Viejo, Costa Rica, when we were drawn to Roatan, Honduras.”

From the air, flying in, they saw a beautiful reef, azure blue water, and white-sand beaches lined with palms. Verdant forested hills form a spine the length of the island. On the ground, they found friendly locals, a large population of U.S. and Canadian expats, and they quickly realized there was plenty of room for opportunity and growth.

“When we first visited, it felt like an untouched gem,” says Wyona. “On our second visit to investigate specific businesses, we stepped out onto West Bay Road, and my husband said, ‘feels like we’re home!’”

When the Cool Beans Coffee House (Coolbeansroatan.net) became available, they knew they had a perfect match. They purchased the condo store-front and business in West Bay Plaza in April. And, with a turn-key operation and the magical ingredient—customers—they sold everything at home and moved to Roatan.

Neither had any previous coffee shop experience, but both have worked in the service industry and understood what constitutes good service. Wynona admits the decision was scary. It meant stepping out of their comfort zone and trying something new. But now they are happier than they have ever been.

“We start our day with a walk on the beautiful West Bay beach and a swim in the ocean, then we head back to the coffee shop for breakfast in our swimsuits. That’s not something that would be acceptable back in North America!” says Wyona.

“If supplies are needed that day, we head to the town of Coxen Hole or French Harbour. Errand days are fun and always an adventure. Most days we return to the coffee shop to relieve our coffee barista at 1 p.m. then we are hands-on until closing. We love the laid back atmosphere and social aspect of meeting customers from various parts of the world.

Business is great and the couple is adding homemade breads and pastries to the menu as soon as their new oven is installed. Wyona says, “It has been hard work, but has paid off in new friends, a good business, and a great lifestyle.” – Steve Carr

When Northern California native, Cole LaValley, moved to Medellin, Colombia in 2010, he had never started a business from scratch before. “I owned a take-and-bake pizza shop in Reno, NV, which I had bought from my parents. But making pepperoni pizza and dealing with teenage employees has never been my dream. It was good learning how to run a business, but I’d always wanted a property in Latin America, and selling up the pizza shop gave me this opportunity,” says Cole.

While most people thought that Colombia was still in the throes of a drug war, Cole had heard differently. “When I got here and began to scope out opportunities, I quickly realized that Colombia had just come out of a dark time, and as such, was about to go into a major developmental phase. I wanted in on that.”

“I always thought that I’d want to live on the beach in some out-of-the-way area. When the time came though, a bigger city was the place for me. Medellin is physically beautiful. It’s the greenest city I’ve ever been to. The weather is better than any other place I’ve lived. The people are nice, and there’s a little of everything here, for anyone’s taste. The people have a sense of pride and duty to move forward and they want to develop as a society. There’s a lot of mutual respect amongst the citizens. The real estate market looked good, too,” says Cole.

“When I first decided to open a business here, I looked at a lot of different things. I decided to go into the hostel business because every month it seemed like more and more tourists were arriving. I had no previous experience in running a hostel, but I did know enough to look for a trustworthy and experienced Colombian partner. Ben is Colombian and I actually stayed in his hostel when I first got here.”

The hostel is called Calle 10 Hostel (Calle10hostel.com). “It’s a simple operation,” says Cole. “We have two dormitories with a total of seven bunks, and four private rooms. The house itself is over 80 years old, so we had to install gas and more electrical outlets, dividing walls and bathrooms. We have a public computer, a kitchen, a billiards table, TV and DVDs, a book exchange, and a laundry service.”

“We opened in July, and because we are not high on the tourist radar yet, about half of our clients are Colombian, the other half a mix of North Americans and Europeans.

“I’m proud of what I’ve done so far. I think it’s an extremely good move to diversify your living options, meaning if you can have two countries (or more) to call home, you’ve protected yourself from various risks. Here my equity has gone up.  I’m concerned for the U.S. and now I’ve got more personal options. But I still can’t wait to go home for Christmas at my parents’ house.”

Advice? “Spend some time in your potential new home town before you commit,” says Cole.

“I want to stay here and put a few years into the hostel. In a few years’ time, who knows?  Perhaps I will go in search of new opportunities in new places. If I stay here and my taste changes, maybe I’ll swap out my apartment in Medellin for a little finca in the middle of nowhere, or a little cabin along a quiet beach.”

“Working for Yourself Is Hard to Beat”

Sally Stone and her former husband Mervyn where searching for superb scenery and a relaxed pace of life when they bought a small stone cottage in Brittany, on the Atlantic coast of France.

At the time, Sally was working as a director in a marketing company; their Breton cottage just a part-time retreat. But a year later, in 2002, Sally lost her job to cost cutting and needed to find something else.

The couple’s cottage needed renovation when they bought it and the work they were doing on their own French home sparked an idea. Sally had no experience starting a business, but that wasn’t going to stop her. The couple bought the neighboring cottage to make a bigger permanent home from which they could run the business – a full property-management service that could turn its hand to anything. The couple moved to Brittany full-time and their business, Les Bons Voisins (LBV), “the Good Neighbors,” was born.

“We started out caretaking second homes for people,” Sally says. “But we soon found ourselves tackling all kinds of problems from removing hornets’ nests to tracking down elusive shades of paint.” LBV became a one-stop-shop for people who wanted to feel secure about their home when they weren’t there.

Sally had to battle with French bureaucracy to set up the business. “I found it hard to explain what our business actually did, since there wasn’t a category it fitted into easily. I made countless visits to government offices to get the business off the ground. But problems are also opportunities. I learned French while sitting in dusty waiting rooms, so it had an upside.” The rules have relaxed somewhat since then, and you can now register certain types of small business on the Internet.

Sally had always thought the LBV business model could work anywhere in France. More than 300,000 foreigners own second homes in France so the market was already there. The profile of people moving to France full-time has changed over time, too. Younger people seeking a better lifestyle are moving in but need a source of earned income.

People thinking of providing similar services in other parts of France contacted Sally and Mervyn and the franchising idea took off. The trickle of franchisees became a flow and Sally has overseen 55 franchise start-ups in total. Today LBV looks after more than 1,000 properties owned by clients of all nationalities.

Franchising is well regarded in France since it is highly regulated and offers reasonable protection to franchisees. Sally is keen to make sure the business is right for would-be franchisees. “We also give new franchisees an intensive training course. Our package enables them to get their business started within six weeks.” Normally, it takes much longer in France. The central office in Brittany provides ongoing support to franchisees and access to LBV’s network.

Sally’s can-do approach extends throughout the LBV network. “Our motto is ‘no job too small, no project too large.’ Clients know that when they arrive for a relaxing vacation they won’t find a leaking roof or waist-high weeds in the garden.” Part of the LBV ethos is to use French artisans (tradesmen) wherever possible to carry out specialist work. Sally says this is a win-win situation: French tradesmen get business while clients boost their standing with the French by using local labor.

Sally’s advice for people thinking of working in France is to do their research first. It’s not easy to get a job if you don’t speak French and starting a business from scratch is hard work. Setting up as a franchisee can be a solution. “We don’t expect LBV franchisees to be bilingual, but they will need to get a good grasp of French.”

“Do I miss my company Mercedes and power suit? Occasionally, on a bad day. But living in a wonderful place and working for yourself – it’s hard to beat.” You can contact Sally about franchising opportunities via her website: Lbvfranchise.com. – Vanessa Couchman