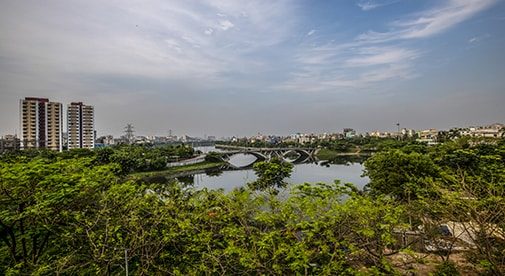 As an economy, Bangladesh has a long way to go, but it’s moving faster than its rivals. ©iStock.com/Ishtiak Hossain

Its economy is growing every which way. A recent United Nations (UN) report says that Bangladesh will be the third-fastest growing economy in the world in 2019 (based on GDP). The UN expects Bangladesh’s economy to grow 7.4% this year—just behind India, at 7.7%, and South Sudan at 8%.

But the country’s infrastructure still needs a lot of investment. It needs roads, bridges, schools, and dams. And 20% of Bangladesh isn’t connected to a stable supply of electricity.

That’s slowly changing. The country is bristling with construction cranes. And that’s only going to accelerate. Early in 2019, for example, Japan agreed to loan Bangladesh $2.5 billion for infrastructure projects. One of those projects will be Bangladesh’s first underground railroad. The 15-mile rail line will be constructed in Dhaka. Bangladesh will also use the money to build a coal power plant and seaport.

Ironically—and one of the most compelling things about Bangladesh—is that its infrastructure needs aren’t as enormous as first meets the eye. You see, Bangladesh has 160 million people (around half the population of the U.S.)—but they’re packed into an area the size of the U.S. state of Iowa (or the country of Nepal). What that means is that transporting people and things (after all, that’s the point of infrastructure) is simply easier (and costs less) because it doesn’t have to go as far. Large countries require longer roads, more extensive power networks, and longer railways— which requires more investment and more time.

Bangladesh has a lot of challenges ahead. But it’s in the early stages of a multi-decade growth trajectory. Early investors could make a lot of money.

There’s a crazy amount of energy on the streets, in business, and everywhere…and there’s an attitude that “anything goes.”

In that context, the politics are messy.

To explain…let’s rewind a bit. During elections in 2014, the Bangladesh National Party boycotted the election after the governing Awami League refused to put a nonpartisan caretaker in place to oversee voting. As a result, about half of those running for seats in parliament were unopposed.

Investors into this market could make a lot of money.

Preceding the election, the government also put the Bangladesh National Party leader under house arrest, and arrested other party members. There was also violence surrounding the election, with more than 20 people killed.

Late in 2018, the country again held elections. Prime Minister Sheikh Hasina won a third-straight term. And her party, the Awami League, won 288 seats out of 300 in parliament.

Meanwhile, before the elections, the Bangladesh National Party leader and former prime minister, Khaleda Zia, was jailed on corruption charges—which she says were politically motivated. And at least 17 people were killed during the vote.

It seems pretty clear that the election was rigged. That’s bad for the future of democracy in Bangladesh, but it could be positive for investors in the country.

You see, the continuity of keeping the same government will help keep the economy stable. And now, the uncertainty over elections is over. Instead of worrying about upcoming elections, investors can focus on the long-term fundamentals of Bangladesh’s economy—which is expected to see 7% GDP growth over the next five years.

And as for corruption…none of the people I spoke with in Bangladesh when I visited in 2017—entrepreneurs, bankers, senior managers at large conglomerates— even mentioned corruption as a big problem.

In many countries where corruption is an issue, people complain about it, blaming venal politicians and policemen for their problems. But in Bangladesh, it seems like people are better at factoring it into their plans—and just getting on with life. Meanwhile, the perception that corruption is crushing business also helps keep people away. “Corruption? It’s not stopping anything from growing,” a senior manager at one of the country’s big conglomerates told me.

So while it’s true that Bangladesh still has a lot of challenges ahead, it’s also in the early stages of a multi-decade growth trajectory. And early investors into this market could make a lot of money.

So if Bangladesh isn’t on your radar yet, it might be time to put it there. The db x-trackers MSCI Bangladesh IM Index UCITS ETF (LSE: XBAN) remains a buy.

Editor’s Note: Kim Iskyan is the publisher of Stansberry Pacific Research and has lived and worked in 10 countries, including Spain, Russia, Sri Lanka, and the United States. Along the way, he’s learned about how markets work…and what matters (and doesn’t matter) in the world of investing.

Stansberry Pacific Research is an independent investment research company based in Singapore that delivers investment insight on Asia and around the world. This essay was first presented to readers of Kim’s premium global investment service, International Capitalist. See: Stansberrypacific.com for more details.