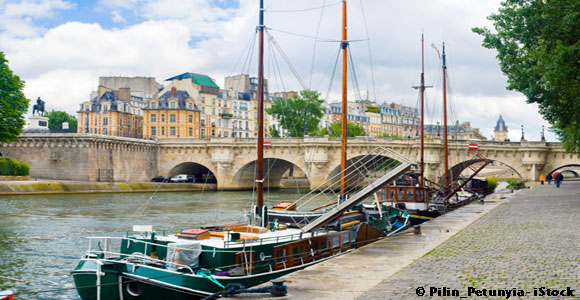 No city in the world wears a cloak of glamour and sophistication quite the way Paris does. From the cool allure of the Avenue Matignon boutiques to the glittering elegance of the Opera house, Paris is a city that makes you crave the best of everything. Thanks to this dazzling aura, many Paris-bound visitors are willing—or resigned—to stretch their budgets to breaking point to become one with the city’s glam. But I’m going to let you in on a little secret: You don’t have to. Paris thrives on its glamorous reputation, but discounts and deals are available here just as they are everywhere else. With a little inside knowledge you can enjoy the best of Paris for far less money than you’d think. Here’s how:

Restaurants: As any student can tell you, it’s easy to eat cheaply in Paris. But as tasty as falafels and panini are, they don’t exactly represent the best fare Paris has to offer. Instead, try Chartier, a Parisian classic dating back to 1896. Chartier has an enormous yet elegant 19th-century dining room and prices that keep it bustling. The soup of the day or a salad of grated carrots with vinaigrette dressing costs just over $1, with other appetizers averaging about $4 or $5. Main courses, including trout with almonds or the restaurant’s legendary roasted chicken, run about $10 to $13. Afterward, you can savor desserts such as Dame Blanche meringuée or Peach Melba for about $5.

Another low-priced gem is La Cordonnerie (20 Rue St. Roch, 75001), a tiny but charming traditional French restaurant where Hugo, the chef, cheerfully prepares mouth-watering dishes like chicken with foie gras before your eyes in an open kitchen. A two-course dinner costs $20 to $25 per person.

For classic bistro food and ambience, head to Le Bistro du 7ème (pronounced seti’yem), where you can get a delicious and copious three-course dinner, including, for example, a dozen escargots, duck confit, and crème brulée, for about $30.

Interested in learning more about France? Simply enter your email address below and we’ll send you a FREE REPORT: A Taste of France: All the Ingredients for the Good Life.

This special guide covers real estate, retirement and more in France and is yours free when you sign up for our free daily IL postcards below.

Get Your Free Report Here

Restaurant Auguste (54, rue de Bourgogne 75007) offers a chic, modern décor and a three-course, fixed-price lunch for just $50. There’s also L’Apagé (51 Rue Jouffroy d’Abbans 75017), a phenomenal one-star restaurant, which offers a changing four-course lunch menu for $55. And if you dare to venture into two-star territory, Le Relais Louis XIII (8 Rue des Grands Augustins 75006) helmed by Manuel Martinez, a chef well-regarded for his mastery of classical dishes such as roasted duck and lobster ravioli, offers a $63 set-price menu for a three-course lunch.

Shopping: It’s the dream of many to arrive in Paris wearing Gap and go home swathed in Chanel. Good thing there are bargains to be found, even when it comes to high-end finery!

If you’re truly dedicated to scoring great fashion finds, coincide your trip with Paris’s soldes. These are nationwide sales held each January and June, lasting for five weeks. During this time, you’ll find enormous discounts—sometimes as much as 70% off—on everything imaginable, from house-ware items to bikes to shoes. Even major fashion houses like Dior, Chanel, and Hermès succumb to the frenzy of the soldes, albeit with a more limited selection of discounted offerings.

The stores don’t feature just clothes; rather, they also sell luxury jewelry, shoes, handbags, and even paintings. Discounts range from 20% to 80%. That said, haute couture doesn’t come cheap, even when it’s a bargain. If the idea of finding a pair of gently-worn Jimmy Choos for $350 makes you gasp with pleasure rather than shock, this is the place for you. (New pumps retail for $575 and up.)

If you prefer discounts on new fashions, then head to La Vallée Village, an outlet mall, just 35 minutes outside Paris. Although it’s called a “mall,” it’s actually a series of boutiques in a village-like setting. Some 115 outlets are there, including Paul Smith, Gérard Darel, Sonya Rykiel, Kenzo, and Max Mara. Prices are reduced by at least 33% year-round. You can reach the village by the commuter train (RER A) or by catching an express shuttle bus that runs twice daily from Paris.

Theater: French appreciation for the arts is legend. On any given day, there are dozens of theatrical productions and performances taking place around Paris: classical-music concerts, rock concerts, operas, ballets, cabarets, “café-theater,” circuses, and plays, a few of which are even performed in English. Full-price tickets for sought-after performances can easily cost upward of $100 each.

You can snag cut-rate tickets in a few ways. For most theater performances, you can get a 50% discount on tickets bought the same day as the show when you buy at Le Kiosque Théâtre—special kiosks that only sell discounted, same-day tickets. These kiosks, located at Place de la Madeleine, the Parvis de Montparnasse, and Ternes, are open Tuesday through Saturday from 12:30 p.m. to 8 p.m. and from 12:30 p.m. to 4 p.m. on Sundays. For best results, go at least an hour in advance of the kiosk’s opening, if not earlier. .

Good deals can also be found on French websites Billetreduc.com and Ticketac.com. These sites offer theater tickets from 9% to 50% off—and you can buy them in advance of the performance.

Opera or ballet buffs on a budget can snag tickets at either of Paris’s opera houses, Opéra Garnier or Opéra Bastille, for as little as $8 to $14. Just go to the ticket office about two hours before the performance (the box office opens an hour before the show) and request a “category 6” ticket. Yes, category 6 seats offer limited visibility, but it’s still an opportunity to enjoy a first-class performance for the price of a movie ticket. And if you’re at Opéra Garnier, you can gloat over the fact that you’re sitting in one of the most stunning opera houses in the world.

Museums and Attractions: One of the best things about Paris is that simply strolling along the cobblestone banks of the Seine or the tree-lined paths of the Canal St. Martin can feel like a wonderful extravagance, even though it’s absolutely free. There are dozens of other ways to enjoy Paris without spending a cent.

Many major sites are free, including the Jardin du Luxembourg, Notre-Dame Cathedral, and the Basilica of Sacré Coeur. It also costs nothing to pay your respects to great talents such as Molière, Chopin, Jimi Hendrix, Jim Morrison, Gertrude Stein, and Oscar Wilde at the Père Lachaise cemetery.

Take note also that on the first Sunday of each month all museums in Paris are free. About 22 museums, including the celebrated Musée Carnavalet (a Paris history museum), Maison Victor Hugo, and Musée de la Vie Romantique, are free year-round.

During winter months, the ice-skating rink outside the Hôtel de Ville is free (although skate rentals cost $7). And during July and August, it’s free to settle in a lounge chair and sun yourself at Paris Plage, the incredible faux beach the city creates on the quays of the Seine each summer.

If not free, then discounts are available for many attractions. You can get a $7 reduction on the price of a Seine river cruise if you buy tickets online through the website Vedettesdupontneuf.com.

Museum-lovers can save money by buying a “Paris Museum Pass.” A two-day, four-day, or six-day pass will allow you unlimited access to 60 museums and monuments in Paris, including the Louvre, Musée d’Orsay, Versailles, and the Arc de Triomphe. Prices start from $57, which means that by the time you’ve visited three museums or monuments, you’ll have already recouped your investment.

Interested in learning more about France? Simply enter your email address below and we’ll send you a FREE REPORT: A Taste of France: All the Ingredients for the Good Life.

This special guide covers real estate, retirement and more in France and is yours free when you sign up for our free daily IL postcards below.

Get Your Free Report Here