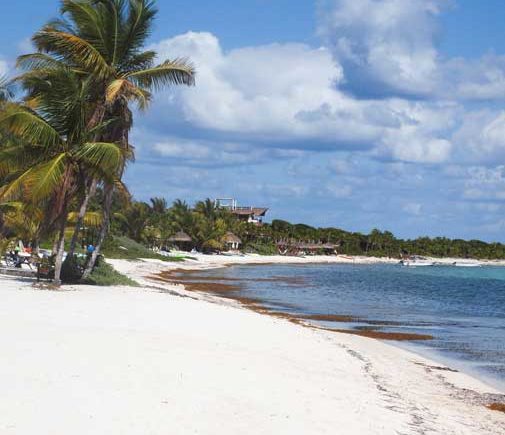 As the Path of Progress rolled into town, Tulúm’s market matured, but it’s still throwing up killer deals for those in the know. ©Jason Holland

Back then, it was a low-key, hippy-chic beach destination for a “new crop of flower children” who listened to The Grateful Dead on the radio, stayed in cabins on the beach, and swam naked in the surf. Fast-forward 36 years and yes, it’s still beautiful. But the days of camping on the beach for a few dollars a night are a very distant memory.

The visitors who come here now still look like flower children. But they’ll pay $7 for a double espresso…splurge $100 or more on dinner in a fashionably rustic restaurant…and fork out $500 to $1,000 a night to stay in one of those beach cabins. It’s no longer the off-the-beaten-track paradise of the early ‘80s; Tulúm has gone mainstream—in a big way—with a booming population.

But you still have an opportunity to profit here, thanks to what I call the “grand Tulúm anomaly.” The anomaly is that, while this destination attracts the jet set, real estate values there are among the lowest you’ll find for a Caribbean destination of this quality.

I first visited Tulúm in 2004. I expected a lot to have changed since Bill’s visit 13 years before. And true, I didn’t spot any naked flower children when I first stepped foot on Tulúm’s white sands. But it was still a place largely undeveloped, and off the radar for most people.

To get there, I had to drive along rutted dirt roads to reach the picture-perfect Caribbean beaches. But I could see that change was coming…an unstoppable Path of Progress juggernaut that would supercharge real estate values. It started in Cancún, with a mega investment plan from the Mexican government. Land values increased a thousandfold in just 25 years.

Then the Path of Progress rolled down the coast to Playa del Carmen, transforming a once-sleepy fishing village into the internationalized place it is now, sucking in digital nomads from all over the world. Finally, it headed for hippy-chic Tulúm.
I was there in 2004 to figure out the opportunity. Back then, the big investment play was to buy in and around Tulúm town, ahead of the Path of Progress.

Buyers who got in at that point saw land values rise as much as tenfold. That Path of Progress is still rolling through Tulúm, 13 years after my first visit. And development is homing in on Tulúm town.

In 2004, the town wasn’t much more than an outpost with a few stores and cafés. Now, every time I visit, it’s changed. Development has stretched back another street. New restaurants and boutique stores selling handicrafts and pieces of art have opened. And the population is booming—multiplying with every passing year. This place has very definitely arrived.

Everywhere you look, you see “Beautiful People.” They come here to get in shape and work on their Zen in hidden, expensive retreats. They top up their tans in designer bikinis. They get in line outside hip restaurants to sip fancy $12 cocktails. That’s despite the fact that Tulúm beach is off grid. Electricity is provided (usually on a set schedule) by some hotels that run their own generators.

These cabins are a bit of a romantic dream—for a couple of days. If you’re here for a longer vacation, they become tiresome (never mind expensive). People want something more comfortable but still close to the beach and to all amenities. I understand the initial appeal. Tulúm has one of the finest beaches I’ve come across in my close to two decades of scouting…and I’ve seen a lot of beaches.

But it’s what’s happened around the beach that’s really interesting for real estate investors. The beach is a big draw for tourists. And as tourist numbers grow, so do amenities to cater to them. Tourists need a place to stay. And Tulúm beach offers that in its own special way.

Most buildings are low-rise, one or two stories, with thatched roofs. Their style is eclectic. Bright-colored Chinese lanterns and Himalayan prayer flags sway in the sea breeze, suspended above tables carved from tree trunks, woven hammocks, and embroidered cushions.

There aren’t any mega-brand or chain hotels here. There aren’t any sprawling resorts. The hotels are boutique. They’re aimed at distinct market niches: the yoga crowd, the New York set, the rich and famous. Buy a condo at the right price that gives you the best of all worlds—proximity to the beach and town, and in the right community that will be a destination for the well-heeled yoga person. Do this, and you’ll be in front of the Path of Progress that rolls at speed toward Tulúm…

The 80-mile stretch of the Riviera Maya didn’t exist as a hot tourist destination 30 years ago. But today, it’s Mexico’s hottest vacation getaway. It’s a classic Path of Progress story. In the 1960s, the Mexican government realized the huge potential of the booming travel market. Cheaper flights had opened up overseas vacations to the masses. The Mexican government wanted a slice of the action, and it was forward-thinking in the approach it took.

The government didn’t just put out an expensive ad campaign, in the hopes of drawing investors and encouraging development. It got down to basics, studying what tourists demanded on vacation. It fed those parameters into a computer, which selected a handful of possible locations in Mexico that fit the bill. Cancún was one of them.

At the time, Cancún was a coconut plantation with a few caretakers, but it had loads of potential—a beautiful Caribbean setting with sugar-soft beaches.

The Mexican government rolled its sleeves up and set to work. It built an international airport. It put in roads and water treatment plants and electricity. It lured big hotel chains with promises of tax breaks and finance to help them build. The effort took a few decades, but Mexico pulled it off. Cancún became a tourist mecca. And the Path of Progress spilled over from Cancún to the Riviera Maya. Moving south, it transformed the fishing village of Playa del Carmen into a cosmopolitan beach city. And it kept on moving, past Playa, toward Tulúm.

Tulúm is now one of the fastest growing towns in Mexico. It’s on a tear. There’s a real buzz in the air, especially downtown.

New stores, restaurants, and hotels are opening every month.

A series of highway upgrades means it’s quicker and easier to get to Tulúm than ever before. From the international airport in Cancún, it’s only 90 minutes. Tourist numbers on the Riviera Maya are ratcheting up, year on year. In 2016, 4.8 million people visited. Many have Tulúm in their sights.

Development first came to Tulúm beach, with rustic-chic hotels, restaurants, and cafés springing up. Tulúm beach is now a foodie destination, with a focus on “farm to table,” organic, and local produce. It even hosted a Noma pop-up earlier this year, following in the footsteps of Tokyo and Sydney. All available dinner reservations were snapped up within two hours of the pop-up’s being announced. Diners paid $750 a head.

Hartwood is the hipster darling, where you’ll need a reservation months in advance if you don’t want to wait in line. It serves lobster salad, short ribs, and shrimp. Then there are the yoga retreats, bikini boot camp…the wellness angle. Tulúm is popular with the well-heeled who want a holistic element to their vacation. In keeping with that, Tulúm beach isn’t a late-night spot. Most places close before 11 p.m. Visitors want to practice their lotus position on the beach at sunrise rather than partying under the stars.

While the rise of Tulúm beach from a deserted strip of sand has been well documented by glossy travel magazines, Tulúm town has escaped close scrutiny. Back in 2004, on my first trip, I could see why.

In 2004, Tulúm beach was already cementing its reputation as the Next Big Thing. It featured in glossy magazines and garnered rave reviews in U.S. newspapers. Celebrities, movie stars, and fashion models descended in droves, “dressed down” in expensive boho-chic outfits. Tulúm town, on the other hand, hadn’t even left the starting block. Sandy streets meandered away from the main drag. Stray cats wandered past dusty cars propped up on bricks.

Fast-forward to today, and Tulúm town’s got an edge. Its population has exploded over the last decade, from 10,000 in 2008 to 30,000 by 2015. And it’s still growing, bringing in folks from across Mexico for work and entrepreneurs from around the globe who can see the opportunity it offers.

This growth has brought plenty of conveniences and amenities—and also more noise and traffic. The town is buzzing at night…too loud for one of the yoga set. But it also has all the amenities they want for their vacation.

In 2004, Tulúm town had one ATM and a supermarket. The town now has three proper banks and a gourmet supermarket, stocked with French cheese, Italian wine, and crusty, fresh-baked bread. The little shops still sell souvenirs, but some are catering to a new demand for expensive handicrafts, clothing, and works of art. And the choice of places to dine has gotten much bigger.

Ten years ago, Tulúm town’s accommodation was a couple of basic backpacker hostels. But it’s now seen as a destination in itself, not just somewhere to pass through on the way to the beach. There’s a whole new business in town, building and operating small boutique hotels. These typically offer a central location, a studio-sized apartment that’s simply but tastefully furnished, and a shared rooftop area with seating and sometimes a tiny plunge pool. Their nightly rates typically run from $100 to $300 a night, and they’re not short of guests.

I’ve been keeping a close eye on the real estate market in Tulúm over the past 10 years…and in that time, it’s changed radically. But there are still opportunities if you know where and how to look.

Editor’s Note: Ronan McMahon is Executive Director of Pathfinder, IL’s preferred real estate advertising partner. Tulúm has been on Ronan’s beat for over a decade and is just one of the destinations where members of Ronan’s Real Estate Trend Alert (RETA) service have profited. Learn more about what Ronan does and the deals he brings RETA members.