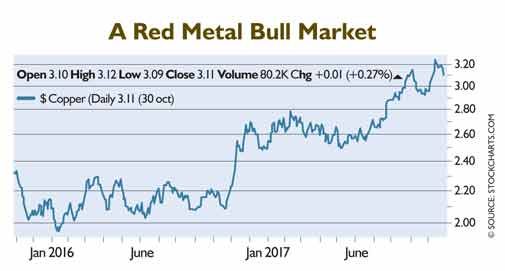 The price of copper has been rising since 2016. ©Source: Stockcharts.com

It would be a 46% increase from its current price. And that’s after copper prices rose 50% in the past year.

According to the giant mining company, supply and demand are out of balance. There won’t be enough copper to meet demand. And that means rising prices. As you can see in the chart, rising prices have been the theme in copper since late 2016.

Codelco Chairman Oscar Landerretche attributes the change in outlook to “the acceleration of the electrical economy.”

Part of that rapidly rising copper demand comes from electric vehicles. According to analysts at Morgan Stanley, the average electric vehicle has 165 pounds of copper in it. Over 88 pounds of copper are in the batteries alone. The rest is in the vehicle itself. A typical electric car battery is 20% copper, by weight. If this market explodes, as most analysts believe, copper demand will as well. You can’t make electric cars without copper…

Today, electrical and electronic products consume 38.7% of the copper supply. Building construction is a close second at 30%.

The copper price rises and falls with the world’s largest economies. When we have robust economic growth, the copper price climbs as supplies tighten. However, when growth slows, supply outpaces demand, and the price falls.

Today, we are in a period where demand is rising.

“Russian stocks had an excellent year last year, bouncing from extremely depressed levels reached at the end of 2015.

“But then this year has been relatively weak once again for Russian stocks, meaning they’re back in super cheap territory. They’re priced for a crisis, just as crisis starts to recede (both in terms of economic recession at home and international tensions in places like Syria).

“This looks like another buying opportunity. It’s a pause in the market recovery that began in early 2016. Even more than that, 2017’s falls could have now bottomed out.

Plenty of investors have told themselves the fees they pay are just a small percentage. It won’t have that big of an impact on their savings. But that 1% fee will have a double blow on your retirement nest egg,” writes Jocelynn Smith of Banyanhill.com.

Actively managed investment vehicles such as mutual funds typically have significantly higher fees, with most averaging above 1%.

Another option is to invest in passively managed investments such as exchange-traded funds (ETFs). The SPDR S&P 500 ETF (NYSE: SPY), which simply follows the broad market S&P 500 Index, has a fee of only 0.10%.

“Before the September hurricanes, the Federation of St. Kitts & Nevis offered two options, an investment of $400,000 or more in qualifying real estate…or a non-refundable contribution to the Sugar Industry Diversification Fund (SIDF).

“The St. Kitts & Nevis Citizenship by Investment Unit (CIU) have announced a temporary price reduction for the SIDF option.

“These price reductions mean that the cost of applying for St.

Kitts & Nevis citizenship for a family of up to four persons has now fallen by 50%. Until this offer expires, St. Kitts & Nevis has the most affordable family contribution option of all of the Caribbean CIPs. But you have to start the application process now.”

It’s become fashionable to say that American clients are unwelcome at Swiss banks. But that’s simply not true,” writes Bob Bauman of Banyanhill.com.

“Your money is most welcome there, so long as you have enough to make managing it worthwhile…which is less than you may think.

“Switzerland today still stands as the world’s best all-around offshore banking and asset protection haven despite the compromises the Swiss have been forced to make under international pressure. The current estimate is that Swiss banks manage at least one-third of all assets held offshore by the world’s wealthy, an estimated $3 trillion to $4 trillion.

“There is another good reason to consider Switzerland as a base for your investments: the mighty Swiss franc.

“Traditionally, when world trouble flares, such as with tweets about North Korea threatening annihilation, financial anxiety mounts. Money managers then turn to that usually comforting currency refuge, the American dollar.

“The alternative is the Swiss franc, long a “safe haven” currency that smart investors buy when other currencies, including the euro and the dollar, are under pressure.

“The franc is a world-respected currency backed by a robust national economy, a stable political framework and enough liquidity to deal with turmoil in international trading.”

This Industry is Set for Explosive Growth

The smokestack days of China’s economic ascendancy are fading. In its place a new, tech-innovative smart economy is being built,” writes Tama Churchouse of Stansberrychurchouse.com.

“A combination of government support, huge corporate research and development budgets, a ring-fenced economy (i.e., not particularly “open” to foreign competition), and a 1.4 billion-strong mobile-connected domestic population, have set the stage for China to become the global leader in artificial intelligence (AI) over the next decade.

“In July of this year, a national AI development plan was published by the State Council. The aim of the plan is to foster research and implementation of AI technology across the entire economic spectrum, from private enterprise to national defense.

“When you see a significant shift in policy support for a particular industry it’s good to be an owner of any stocks that benefit from growth in that particular sector. Why? Because Chinese government support means growth.

“To say that AI is a priority for China’s top internet companies would be an understatement. Baidu, Alibaba, and Tencent, otherwise known as “BAT”, are the trio of China’s internet giants. Together they account for nearly a trillion dollars of market capitalisation.

Internet search firm Baidu (Exchange, NASDAQ; Ticker, BIDU) opened an AI lab in Silicon Valley back in 2013. Tencent Holdings (Exchange, HKSE; Ticker, 700) earlier this year announced the opening of an AI Research Centre located in Seattle (who else is in Seattle? Amazon and Microsoft…).

“They’re all pouring enormous ﬁnancial and human capital resources into AI. And China’s economy is ripe for these companies to reap the rewards.”