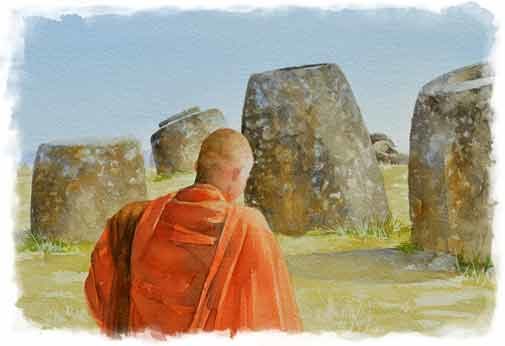 Scattered across the landscape are thousands of stone jars.©Colleen Clapp

Stone jars of all sizes were scattered among the low hills, rice paddies, and forest. Many were almost six-and-a-half feet high, others barely came up to our knees.

How they got here is anybody’s guess; their origins and purpose are shrouded in mystery, though they are thought to have been crafted more than 2,000 years ago.

We’d arrived here in the Plain of Jars, in northern Laos, the day before. We’d traveled from the temple-rich town of Luang Prabang, taking the bus along winding mountain roads where the top speed probably never exceeded 25 miles an hour. A few vehicles had passed us along the way, but not many—Laos is sparsely populated and cars are scarce.

Some archaeologists theorize that the jars were used for ancient funeral ceremonies.

Others say it’s just as possible that they were used to store rice or rainwater. Local legend suggests they were full of potent rice wine brewed for a giant.

Whatever their purpose, how they ended up in clusters on the plain is also unknown.

You wouldn’t know it by looking across this peaceful, pastoral landscape, but modern and ancient history converge here. The entire region was bombarded and mined during the U.S.’s “Secret War.”

The gateway town to the Plain of Jars is Phonsavan. Here you’ll see building materials, fences, and pots made from old bomb casings. Fortunately, you also see plenty of restaurants and hotels. The Lao Falang Restaurant offers Italian fare with a Laotian twist, as well as homemade ice cream. A couple of places serve up good Indian and Vietnamese cuisine, too.

In addition to the Plain of Jars, Phonsavan has enough other places to explore, including remote, traditional minority villages, cascading waterfalls, hot springs, caves, and lakes.

Flights to Phonsavan depart from Vientiane, Laos’s capital city, or you can take a long-distance bus from Vietnam or Luang Prabang. I prefer the bus trip; the scenic, winding roads twist through thick rainforest, craggy mountains, thatched-hut villages, and isolated towns. These make the journey a highlight in itself.

“The strangest food I’ve ever eaten is haggis,” writes Keith Hockton, IL Malaysia Correspondent. It was at a Robert Burns dinner in Hong Kong.

It’s basically a large sausage of intestine containing sheep organs, oats, onions, and a bunch of other things that I wasn’t that sure about. The texture was chewy, but there was a lot of mystery with the dish. I enjoyed it, but I’d want to know everything that’s in it before I ate it again.”

“I’ve had the dubious pleasure of tucking into quite a few strange delicacies,” writes Sharyn Nilsen, IL Roving Correspondent. “Roast guinea pig (cuy) in Peru was tasty, but very greasy. Grasshoppers in Cambodia were crunchy, salty, and good with a beer. Probably the worst one though, Hot Vit Lon, is a half-developed duck embryo still in its shell. This dish is not for the faint-hearted as the skull can be quite crunchy, and you might find yourself with a mouthful of newly developed feathers.”

“The Basque Country in Spain is justifiably famous for its food,” writes IL Managing Editor, Sean Keenan. “Fine dining on freshly caught seafood in the medieval port town of Getaria is a highlight and pintxos (bite-size snacks) are stacked on bars across the region. Most are delicious and some just strange…in Eizagirre, a bar on Zestoa’s main square, you can try a tasty morsel of steaming cow’s lips on crusty bread. Let’s just say it’s an acquired taste.”