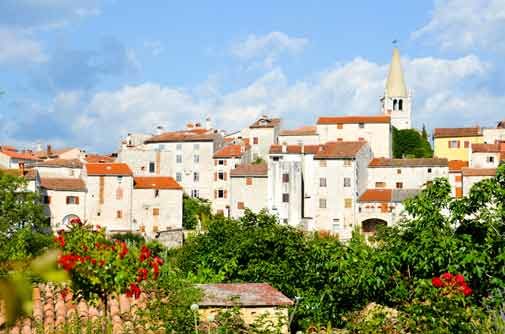 Evening has arrived, and a tangerine-colored sun sets behind the limestone arches of a 2,000-year-old Roman amphitheater. Above, seagulls dance on a warm sea breeze—a peaceful contrast to the line of Roman gladiators marching into the arena. The armored actors and their iron swords prepare to engage in hand-to-hand combat. However, my husband and I are looking for something a little more calming.

We stroll past the gladiator reenactment toward the city’s Roman forum for a glass of chilled Malvasia wine, soft music, and a chance to people-watch.

You might think I was somewhere in Italy. However, the evening I’ve described took place in a town called Pula, on Croatia’s Istrian Peninsula.

Before my husband Shawn and I traveled to Pula on a five-week trip, I’d read descriptions proclaiming Istria to be the “new Tuscany.” Indeed, Istria’s scenic interior—dotted with cypress trees and crimson poppies—does remind me of the alluring landscape outside Florence, where I’ve purchased peppery olive oil and opulent dessert wine, and where I’ve enjoyed meals in locals’ homes.

But Istria and Tuscany are pleasantly different.

Istria is more affordable, allowing us to live comfortably for about $1,300 a month. It is also less densely populated than Tuscany. And it’s diverse. You can spend the morning exploring islands or relaxing at the beach, and your evening dining on wild asparagus risotto in a hilltop town.

You’re about 60 miles from Trieste, and just a four-hour ferry ride from Venice across the Adriatic Sea (it’s about $80 for day-trip tickets, but ferries only run during the tourist season).

Along the coast, pine trees frame azure waters and pebbly beaches, while quiet coves lure snorkelers, kayakers, and sailing enthusiasts. Rovinj is the most famous of Istria’s seaside towns, with its lemon, raspberry, and ochre-colored buildings packed tightly into the shape of a snail shell. I loved sipping a cup of bijela kava (Croatia’s version of a latte) in Rovinj while looking out at the sparkling Adriatic, before having a picnic of Istrian cheese and olives and watching the sailboats go by.

Istria has had its share of rulers. Historical occupiers have included everyone from the Illyrians and Romans to the Venetians and Austro-Hungarians. For roughly a quarter of a century, Istria was part of Italy, which explains why city names are still written in both Croatian and Italian. It all makes for an intoxicating and cosmopolitan mix, with amazing food.

While Croatian is the official language, young Croatians often speak flawless English and are enthusiastic to practice it with visitors.

It’s not just the locals who are welcoming, either. Whether you’re in Pula or in the smallest Istrian town, you’re bound to encounter expats from all walks of life who have carved out new lives here.

Four years ago, freelance writer Isabel Putinja and her husband moved to the quiet village of Gracišce. The couple renovated an old stone home there, eventually finishing it off with a brick oven specially designed for baking artisanal bread.

Gracišce is a tiny medieval hilltop town, with stunning views of a landscape of rolling hills,” says Isabel, a Toronto native.

Their community has a mix of inhabitants, including locals of mostly retirement age, a few French and Italian expats, and residents who left Istria decades ago, lived abroad, and then returned to their homeland.

Eager to share stories about her new life in Croatia, Isabel writes about Istrian culture and places of interest on her blog, Istriaoutsidemywindow.com.

The region’s pleasant climate makes it possible to enjoy the outdoors all year. Coastal areas like Pula are classic Mediterranean, with maximum temperatures of 82 F in July and minimums of 38 F in January. Inland areas with higher elevations see greater temperature differences. Fortunately, you can swim in the Adriatic Sea around Istria from May to October. Also, if you’re outdoor enthusiasts like us, plenty of hiking opportunities exist on the peninsula and cycling trails are easy to find.

Medieval frescoes tucked away in tiny chapels await art history fans, and there are plenty of castles and archaeological parks to visit.

Istria’s largest medieval fortress is in its administrative capital, Pazin.

Writer Jules Verne is said to have been so impressed by Pazin’s dramatic abyss that he even used it as inspiration for his novel, Mathias Sandorf. Today, zip-lining adrenaline seekers love this natural wonder.

Lavender, grapes, and olive trees thrive in the fertile soil around Istria’s hills and stone villages. Many of these communities’ historic structures have been painstakingly restored and turned into homes, guest houses, or boutiques. But a good number of them are crumbling and patiently await a loving hand.

Renting is straightforward, and you’ll find good-value, long-term rentals across Istria. In seaside Rovinj, I saw a listing for a furnished one-bedroom apartment, complete with a balcony, renting for 3,360 kuna ($525) a month. To the east, in the medieval hilltop town of Labin, a furnished two-bedroom apartment with sea views rents for 3,000 kuna ($470) a month.

And Istria’s villages are charming. Motovun is often praised for being the most scenic village in Istria. Labin offers a picturesque setting, with steep, cobblestone lanes, and the village of Bale is bursting with flowers and compelling stone facades. One of my most treasured memories from Bale was when tiny swallows glided through the front door of the town’s 15th-century Holy Spirit Church. Inside, the birds had built nests over the centuries-old frescoes painted by Master Albert from Constanza. Their presence in the room offered a splash of playful energy to the serious and impressive artwork, now faded with time.

Pula is Istria’s economic center. With more than 55,000 residents, it’s also the largest city in the area. With a working shipyard that is illuminated at night, Pula is best known for its Roman amphitheater—known locally as the Arena. Once the setting for brutal gladiator fights, today the 2,000-year-old structure hosts more peaceful pursuits. Pavarotti, Sting, and Elton John have performed here, and an annual film festival takes place each summer.

Just a few minutes’ walk away is Pula’s market, housed inside an elegant wrought-iron structure, while outside, tree-shaded stalls overflow with cherries, wild asparagus, and apples. In addition to Istrian merchants here, I also met vendors from Croatia’s Slavonia and Dalmatia regions, selling delicately embroidered linens and kitchen accessories hand-crafted from olive wood. Pula has good shopping opportunities. You can find everything from family-owned shoe stores to chain outlets and small shopping malls.

The city also has a big hospital upgrade underway, thanks to a $47-million loan from the European Investment Bank. This will give Istria a distinct healthcare advantage, since many hospitals throughout Croatia are known to be outdated. Croatia’s private clinics are well-respected, and costs are considerably lower than those in the United States. I’ve had routine medical visits at private Croatian clinics, and I was pleased with the level of care I received from my English-speaking doctors.

If you’re looking to have a Tuscan lifestyle with a smaller price tag, Istria might make a good home base. Living in a picturesque hilltop town and conducting errands in Pula could prove to be
a great combination. One thing is certain: Istria has a wealth of experiences awaiting adventurers looking to live internationally for the short or long term.

Base Yourself in Istria—What You Need to Know

The Istrian Peninsula is an arrowhead-shaped swath of land encompassing Croatia, Italy, and Slovenia, but is mostly owned by Croatia. Istria County, located on the peninsula, has about 205,000 people living in an area just a bit larger than Rhode Island. The county is sparsely populated and has a lower population density than Tuscany.

When to go: July and August are the peak travel months. So if you want to escape the crowds and higher prices, plan to visit between October and May.

Next time, we’ll visit in the fall to attend all the autumn festivals.

A few potential landlords also said they’d offer us a special rate if we came back during the off-season.

Cost of living: We spent $525 to rent a furnished one-bedroom apartment in the heart of Pula’s Old Town. It was on a picturesque main street, less than 200 yards from the Arch of the Sergii—a triumphal arch built by the Romans. Shopping at European chain stores and making occasional purchases at fresh markets and tiny grocery outlets, our groceries were roughly $515.

We tend to do a lot of home cooking, so our food costs may be lower than the average traveler’s.

However, at Pula’s restaurants you can try a tasty seafood dish (like squid, octopus, and cuttlefish stew with polenta) and a glass of house wine for about 110 kuna ($17.20). You can’t beat the freshness of the seafood!

Transportation: Getting around Istria without a car can be difficult. Knowing we’d only be using mass transit, we chose to make Pula our home base. Once we got there, we discovered how limited Istria’s train and bus connections are. When we visit Istria again, we’ll definitely get a rental car, at least for a few days. 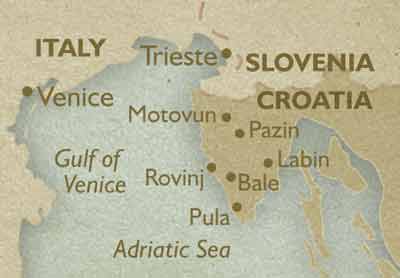 Get connected: Though Istria’s expat community is smaller than those in other parts of Croatia, it’s still home to a dynamic group. I met some wonderful people through the Expats in Istria Facebook group. This forum is small and growing, but its members share everything from regional cultural events and special-interest clubs to meet-ups and properties for sale.

Find a rental: Contact property owners who have listed their accommodation on Airbnb.com or Booking.com, and see if the owners are willing to negotiate a special one-month rate. Alternatively, all the locals we met recommended Glas Istre, which publishes regional news and classifieds. You can also search for apartment listings on the Njuskalo.hr website. Both publications are in Croatian.

Visas and bureaucracy: U.S. citizens can stay in Croatia for up to 90 days on a tourist visa, which is issued on arrival. If you want to stay longer than three months, you must visit a local police station in Croatia and initiate a formal process demonstrating that you have health insurance minimum income, per couple, of $435 a month. See more details at Stari.mup.hr/120032.aspx.