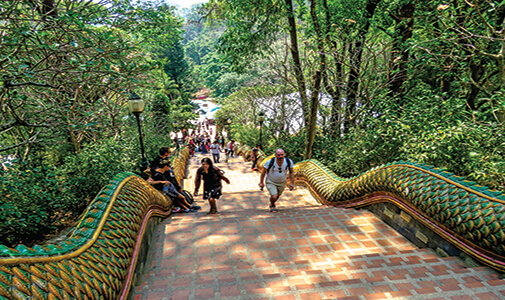 My gateway to international living was teaching Inuit kids on Baffin Island above the Arctic Circle. Although I was still in my native Canada when my plane landed in the tiny fly-in community of Clyde River, I remember finding it bizarre that I didn’t need a passport to make the journey.

I’d dreamed of living in the Arctic all my life and the now-or-never jolt of turning 50 prompted me to act on this ambition. A teacher by profession, I kept an eye open for positions and jumped at the chance when one became available on Baffin.

Located close to southeastern Greenland, Baffin has a wild, haunting beauty. Life on the island is characterized by extremes—months of daylight in summer, followed by months of darkness in winter. Living there, every sensation was new to me, from the smell of sealskin boots to the sound of creaking sea ice. I found this constant rush of fresh experiences intoxicating. It sparked in me a desire for novelty, setting my life on a new trajectory. In the years since, I’ve worked in five countries on three continents—all through teaching.

My first experience of living overseas came aged 57. After four years in the Arctic, I’d grown weary of the intensity of life on the ice and decided to accept a teaching position in Chongqing, China. Living in this megacity of over 30 million people was a satisfying, if bewildering, departure from the tundra.

Little-known in the West, Chongqing attracts few tourists or expats. I could wander for days in downtown Chongqing and never see another foreigner. Local people were always curious, often approaching me looking for opportunities to speak English. It was unnerving at first, but I learned to open up and enjoy the resulting warm interactions. My favorite memories from China are of the peaceful early morning tai chi sessions with elders in my apartment complex, when firm, well-meaning hands would guide me to the front so that I could more easily follow the group leader.

By the end of my first school year in China, I realized I wouldn’t return to live in Canada, so I went back to tie up the loose ends of my former life. I prepared my house for sale, donated a lifetime of books to the library, and gave nearly everything else to the local fire department for sale in fundraisers. The process was painful at first, but I felt freer with every decision to shed another belonging.

Then I flew back to Chongqing to finish my contract. Although I didn’t want to remain in China long-term, I had begun mentally working through my options for retiring abroad.

After working for a time in Kuala Lumpur, Malaysia—a modern, multicultural city full of history and charm—I relocated to Chiang Mai, Thailand. I had been visiting Thailand for over 20 years and as I considered my overseas retirement options, I kept coming back to Chiang Mai.

The city is located in mountainous northern Thailand, which is cooler than the rest of the country. The people are also some of the friendliest I’ve ever encountered, and I love the active street life and café culture.

Within a few months of arriving in Chiang Mai, I’d bought and begun renovations on an inexpensive condo. The total cost of this was under $70,000. Owning the property opened up new possibilities, giving me the freedom to accept even more adventurous teaching positions around the world. After all, when things don’t work out, I always have my safety net in Thailand.

I always have my safety net in Thailand.

Initially, I accepted a short-term contract in Muscat, Oman. The following year, a school in Luanda, Angola reached out to me through a recruiting site. It was a startup, so there was a possibility it wouldn’t get off the ground, but I felt a connection to the head of the school. Plus, I had never been to Africa.

Five months in, teacher salaries ceased and it became clear the school’s projections for student enrollment hadn’t panned out. Still, I am hugely grateful for this experience. The cultural vitality of Luanda, shaped by its legacy of Portuguese colonialism and hard-won independence, is complemented by its dazzling Atlantic coastline. And during school holidays, I took the opportunity to visit South Africa, Zambia, Botswana, and Zimbabwe. Africa opened up for me and the experience led to another position in Malawi.

In March 2020, my school closed due to the pandemic. On my way back to Bangkok, I spent hours at the airport in Addis Ababa watching wave after wave of expats fleeing Africa in PPE improvised from industrial garbage bags. I felt such an enormous relief turning the key in my condo in Chiang Mai after the surreal 27-hour trip from Malawi. Three days after I entered Thailand, the border snapped shut behind me.

Thailand has been my sanctuary during these bizarre times. Sometimes I’m asked about the financial wisdom of buying property here. That’s not an easy question for me to answer. The returns on my modest investment are more personal than financial. Combined with my teaching skills, this condo is a launchpad for further global adventures (when travel restrictions abate) and provides a refuge to which I can always return.