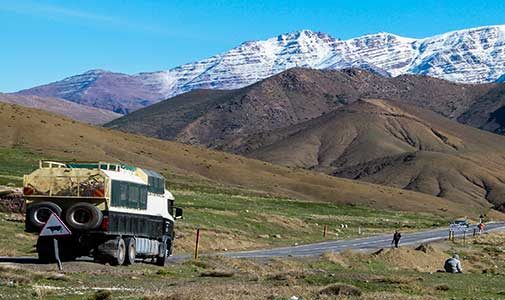 En route to Marrakech, the Atlas Mountains on the horizon. Overlanding brings you deep into Africa. © Tim Nielsen.

A deafening dawn chorus heralds another day across the swaying, golden savannah of the Serengeti National Park, one of the most famous game reserves in the world. Millions of wildebeest are already on the move, their silhouettes shimmering against the early morning sun. Interspersed with zebras and gazelles, their endless lines head relentlessly north. This is the Africa that we dream of, a place of staggering diversity that has inspired its own vernacular and a library of superlatives.

Yet, for all of its attractions, Africa remains a mystery to many Westerners. The most common fear facing prospective visitors to Africa is safety. It has always been a victim of bad press. Media outlets mostly report only her problems, and that can be hard to get past if you never get the opportunity to see the truth for yourself.

Of the 54 countries in Africa, all are different, and most of them are relatively safe. My wife, Sharyn, and I have visited the continent four times and traveled overland through 35 nations. At no time have we encountered a situation where we felt personally threatened, or had anything stolen. Far from it, we were usually welcomed warmly and, in Africa, have had some of our most unforgettable experiences.

Otherworldly scenery and wildlife of Ngorongoro Crater, Tanzania—a naturally formed paradise and wildlife park with no fences. The deathly silence of a golden sunset in the Namibian desert. Exploring historical Stone Town on the exotic spice island of Zanzibar. Visiting the endangered mountain gorillas of the Democratic Republic of the Congo. For those willing to explore, the rewards are bountiful indeed.

Africa remains a mystery to Westerners.

One of the main obstacles to potential travelers is the expense of getting to Africa. Long-haul airfares from the U.S. can run to thousands of dollars. Combine that with a requirement for pricey visas, accommodation, transport, and tour costs, and it can work out to be an expensive exercise to cross off your bucket list.

Plus, you need to spend time to do a trip to Africa justice. So, think of it as a slow-travel destination instead. Spending months rather than days not only allows you to see and experience more, but also lowers your fixed costs per day. With a little research, an African adventure doesn’t need to be a financial strain, and that’s where our preferred method of travel— overlanding by truck—comes in.

Overland trucks all look and work pretty much the same. Most vehicles are heavily modified freight trucks that you’ll see any day of the week plying the highways. Popular conversions are Scanias, Mercedes, Renault, DAF, and MAN. Powerful engines allow you to get off the beaten track to places where the roads are unreliable or transport non-existent. But instead of pulling cargo, the rear is converted into comfortable passenger seating, with storage areas cleverly integrated throughout the vehicle. They’re a safe, sociable, and cost-effective way to get about the game parks and more remote areas, especially when accommodation is expensive or hard to find.

Trucks will include a driver and a guide, a kitchen with a full range of utensils and ingredients, seating, storage for your packs and personal effects, tents for everyone, and a whole variety of spare parts, including wheels and tires. One truck we traveled on even had a spare engine. They are entirely self-sufficient and only require you to shop for meals and have the occasional fuel stop.

Overland truck adventures compare favorably to the more expensive, fully catered 4×4 tours. Those operators will look after your every need, but at a cost. They also lack the social interaction of overlanders, where a group of 15 to 20 adults becomes a team, enjoying the adventure with other like-minded companions.

But it’s the financial considerations that lead most travelers to Africa to opt for overlanding. A fully catered and guided two-week safari in South Africa or Kenya can cost around $10,000. In comparison, for as little as $3,000, you can overland through eight countries over 56 days from Nairobi in Kenya to Cape Town in South Africa. Longer trips of up to 10 months can reduce your daily costs even further.

There are more benefits to overlanding than just the cost though. First, your accommodation, transport, and food are taken care of, allowing you to get on with the job of enjoying the wildlife and scenery. Having other people to travel with you has its own benefits as well. You can team up with your new companions to reduce the cost of expensive extras like side trips. Not to mention that there’s safety in numbers for those who are still not entirely confident about touring in Africa.

Overlanding also allows you the flexibility to join up different legs of a more extensive journey, or get on and off to do your own thing along the way. You may just want to have a break, relax on a comfortable hotel bed, or enjoy some fine dining and rejoin the truck later, fully refreshed.

On one 10-month trip, we spent five months exploring the continent’s west coast from Morocco to South Africa, then headed off independently to Mauritius, Madagascar, and the Comoros Islands, while the truck retraced destinations we’d visited the first time around. We then met back up to travel through Ethiopia, Sudan, and on to Egypt.

Overland companies also employ “fixers” and local contacts who act to smooth your path with authorities as you go. This usually goes unseen, but allows you to get on with your trip without any of the hassles.

Another benefit of overlanding is having your “onward travel” sorted for visas, which is a blessing if you’re heading through multiple countries. Border crossings can be a headache, as each has its own challenges. Having an experienced guide with contacts means less delay, and maybe even preferential treatment.

Finally, the most significant advantage to overlanding is interacting with the real Africa and its peoples. Whether you’re shopping and bargaining for food in the local markets, or meeting the locals at your bush camp, or just alongside the road when you stop for something, you get to see and feel the different cultures firsthand, not just through a dusty window. Shorter, more upmarket tours don’t have time for this, or deliberately try to avoid tourists interacting with locals.

It would be misleading of me to say that overlanding is for everyone. It’s not. Group dynamics will require you to have some excellent people skills, whether it be showing some leadership and maturity, or just avoiding getting into confrontations. Not everyone will be there for the same reasons. Camping in the wilderness may take some getting used to. However, if you love camping and the great outdoors, you’ll be in for a treat.

While sitting around a blazing fire in the African outback can be a defining experience, the distant roar of a lion or call of a hyena may make you a little nervous. But, wildlife encounters are what it’s all about, and most animals will avoid a large fire with a group of people surrounding it.

An overland trip can also be physically demanding. Big, heavy trucks are easily bogged, and you will be expected to help dig it out. Shopping in local markets with limited supplies can also be challenging, but ultimately rewarding. As the only foreigners, you may feel self-conscious as you become the center of attention. But at the end of the day, we’ve always felt welcome and appreciated.

For those looking for adventure, almost every day will require a specific set of skills. It may be your people skills in dealing with others, your spotting skills and knowledge of local wildlife, your mechanical skills in assisting in fixing something on the truck, or your strength to help change a flat tire or dig the truck out of the mud. Even your ability to find fresh ingredients at the market and put together a tasty meal for the others will endear you to the group. Maybe just the skill of keeping cool in a crisis will be enough.

This is not just a young person’s pursuit either. On our trip through West Africa, the average age was around 48, with several passengers in their late 50s and mid-60s. Having older passengers is a bonus rather than a drawback, as they generally have more life skills, practical experience, and common sense that see them cope better in any out-of-the-ordinary situations, when they occur.

Before committing to an African overlanding experience it’s important to do the research to prepare yourself for the journey and prioritize your reasons for going. Wildlife is more predominant in the eastern and southern countries (Tanzania, South Africa, Namibia, for example) and tourist infrastructure is generally more developed. Africa’s legendary game parks such as the Serengeti, Kruger, and Etosha are not to be missed if you want to see the “Big Five” lineup of African fauna: lion, elephant, Cape buffalo, rhinoceros, and leopard.

West and northern Africa (including countries such as Senegal, Mali, or the Democratic Republic of the Congo) are more about people and culture, and the traveling can be a lot more challenging. If you’re up for action activities like white water rafting, ballooning, or sky diving, places like South Africa, Zambia, and Uganda should be on your list.

Once you know what you want, it’s just a matter of picking the overland company and route which suits you and your budget the best. Overlanding is a safe, economical way to fulfill your dreams of Africa. Every day spent there is an adventure in a land where the cycle of life and death is played out every day in front of you, and so diverse that it has inspired generations of adventurous souls to come and discover its secrets. An overlander’s land.

Practicalities to Consider in Africa

U.S. citizens need visas for 41 of the 54 African nations. Some of these you will need to get before you leave home. Others you can get on arrival, or in neighboring countries while you are traveling. Your overlanding company will be able to advise you on procedures. It pays to do the research early to save time and costs.

Seek advice from a professional with expertise in international travel medicine at least three months before your trip to find out which vaccinations and medication and/or treatment are recommended. The effectiveness of specific treatments changes with time, so you should obtain the most up-to-date information. Be aware that some countries will not let you enter unless you can prove you have a valid yellow fever vaccination. Your chosen overlanding company will advise. Two good starting points for your research are Oasisoverland.co.uk and Acacia-africa.com.