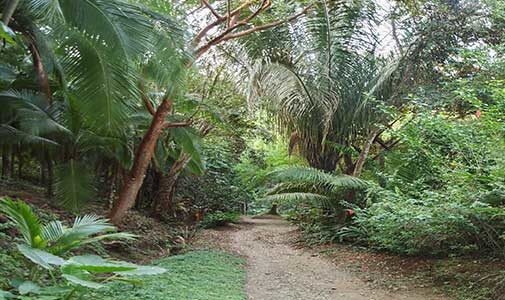 Take the road less traveled, and who knows what might await? Costa Rica shares its abundant natural riches with those adventurous souls who take the time to seek them out. © Jason Holland.

The best swimming holes are the local, secret ones. You know, the ones of tall-tales and summer memories. You only find them by living nearby. Call it “expat’s privilege.”

My favorite is a secluded spot Mother Earth hid away on the backside of the Orosi Valley as it skirts the northern edge of the Tapantí National Park in Costa Rica. This paragon of nature is a hollow within a huge crag, filled with calm sapphire waters in the middle of a fast-flowing, white-water river. The waterway cascades through five-story-tall boulders that have been worn smooth through the ages.

I have a smallholding nearby, where I keep goats and fowl and grow my own food. Even there, the rumor mill turns. Ticos are a chatty bunch. I had heard recurring tales of this famed but hidden Costa Rican swimming hole—the one in the middle of the river that was warmed by a volcanic hot spring flowing through the center of the chilly waters. When I asked where it was and how to find it, I was always met with either a completely vacant look (from those who didn’t know the secret), or I was given vague and ambiguous answers with a wink.

Armed with nothing more than the challenge before me, some blind optimism, and a very rough sense of its whereabouts, I made several forays into the rainforest.

My discovery of the secluded spot occurred one February morning. It was bright and sunny and warm, and the perfect time for another of my adventures. I headed to a spot deeper into the region than I had ever gone before. Hearing some laughter over the roar of the river and spying a very narrow trail that headed through some wooly tropical undergrowth, I held my breath and set out. Climbing over the crest of the last and largest boulder, I paused and sat down with some satisfaction. I was peering into a hollow created by huge rocks that kept most other waterways at bay while it was fed by its own 20-foot cascade.

I began to realize something had changed. The laughter was no more. I looked over to see four young men who looked like frightened deer as seen through the hunter’s sights. They bore their wet boxer-clad bodies quickly over the rocks and crevices, clamoring for their clothes on the way. I realized they were running away not out of shame for having been caught half-naked, but out of alarm that they had somehow let the cat out of that proverbial bag.

Now that I was alone with the power of those waters, I was really able to marvel at how majestic it all was. But I had to ask myself, “This is a great swimming hole, but is it the ‘holy grail’ of swimming holes that I had been on a crusade for?” There was only one way to find out.

The pool is prized for its calm, warm water in the midst of the raging 60-degree biting surge around it. I had to test it. Scared, nervous, energized, and foolish, I stripped off and began the descent. Splashing in and out of the nippy river, I realized that if I just dove into the pool and it wasn’t the pool, I would be numbed beyond comfort.

I thought this must have been the way all those great discoverers of hidden treasures felt. No, this did not compare with King Tut’s tomb, or uncovering Machu Picchu, but it was my Indiana Jones moment.

I took the plunge…and was baptized in warmth and serenity.

Thus began my regular pilgrimages. I’ve learned the best place to park so as to mask the true intent of my mission. I sometimes take my best buddies who come for a visit from the States. We sit on opposing boulders, and I toss chunks of my homemade cheese to them. We nibble, we mime a few ideas across the distance, and immerse ourselves in the wonder around us. I know I can trust them because they are so lost they could never reveal the secret—only the lore that helps keep the myth alive. But we make sure that we never laugh too loudly.

Once, as I was leaving, feeling quite enlivened by the sheer power of the untamed river, I caught sight of a couple of the old ticos who had given me some of the obscure directions for “finding” the spot. I gave them a wink, and they gave me toothy grins. One placed his hand over his heart, and the other winked back. I was no longer an outsider. Why do I even tell you about my secret honey-spot? Because your quest for a new life in a new country can bring you the same kind of feelings. The same kind of exhilaration. The same kind of satisfaction. And when you find your personal “holy grail,” you’ll know that you chose wisely. You may even reckon it a secret too good to share with just anyone.

But if I run into you, and I give you the wink, it will be because I know you understand what you’ve gained.

Editor Note: Costa Rica is safe and politically stable. You’ll find a near-perfect climate where you can enjoy fresh air and sunshine every day.You’ll also likely be healthier than ever, but should you need it, world-class, affordable healthcare is close at hand. Overall, Costa Rica is so affordable for daily living. A couple can live on a monthly budget of $1,700 a month or less. Fast Track Costa Rica Conference is the best way, in a short amount of time, to connect with all the resources and get all the reliable information you need to make your transition to Costa Rica as easily and inexpensively as possible. Get all the details and book your seat today.