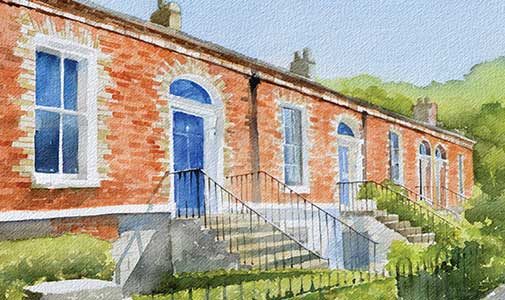 Dublin is a modern city with a historic edge. © Colleen Clapp.

International Living has been showing you how to live the good life in appealing destinations around the world for 40 years now. Since the beginning we’ve looked at several factors in our recommendations: cost of living, warm weather, healthcare, stable government, safety, culture, and…goodvalue property.

We try to focus on places where property prices will go up, allowing savvy buyers to not only own property and live in beautiful places…but also see their asset grow in value. Not every location has that potential. But “under the radar” destinations that benefit from good location, ideal climate, beautiful landscapes, focus of government investment (often for tourism), improving infrastructure, and more are good candidates.

In the first years of IL, we highlighted many locales with such potential. And many have grown into what we envisioned… with increased home prices to match, although many remain affordable.

Ireland’s capital and largest city is surprisingly manageable, with a city center you can explore on foot for the most part, with efficient public transportation available when you need it.

It’s a modern city with a historic edge, with a strong presence of traditional Irish culture. Be sure to pop into a pub for a taste of “trad” music, often played by patrons themselves.

In the third issue of the magazine, we noted the desirable townhouses in Dublin’s quiet neighborhoods south of the River Liffey. Property was available for bargain prices four decades ago—think up to $100,000 for a three-bedroom home—but we also noted the potential for price increases. And that’s certainly been proven right today, as prices have risen four-fold and more. One such property, a four-bedroom refurbished Victorian townhouse with a reception room, marble fireplace, large landscaped garden, and other luxury details, is on sale now for $2.19 million. You don’t have to go so high end, though. A three-bedroom townhouse walking to distance to shops and restaurants, is listed at $466,145.

Costa Rica has long been a haven for retirees thanks to its stable government, low cost and high-quality healthcare, warm climate, and tropical beaches. When we first started highlighting the small Pacific beach town of Nosara, on the Nicoya Peninsula in the northwest part of the country, the town had a real pioneer spirit. There was no phone service and electricity was often spotty. Area roads were sometimes impassable. Over the years things have changed.

It’s still not the easiest place to get to and area roads are mostly dirt and gravel, but it’s become a world-renowned destination for surfing and yoga. There’s a real bohemian vibe in Nosara, with plenty of juice bars and vegetarian, vegan, and raw food dining options, but also boutiques and gourmet restaurants.

Homes on the hillside with panoramic ocean views are popular but pricey; the biggest bargain available now is a three-bedroom home set on 1.62 acres, with a swimming pool and mountain views, for $379,000. There are other options, including a two-bedroom casita a quick walk to Playa Pelada. It’s listed at $245,000. Back when we first mentioned Nosara, similar homes could be had for $60,000. See: Century21nosara.com.

The British Overseas Territory of Montserrat, an island of just 40 square miles about 30 miles from Antigua, is mountainous and verdant, earning it the nickname the Emerald Isle because of its resemblance to Ireland’s coastal countryside. (There are also many residents of Irish ancestry; St. Patrick’s Day is a major holiday.)

Since 1995, the southern half of the island has been off-limits due to volcanic activity. But the northern side is being revitalized. Well before volcanic activity started, Montserrat was a low-cost Caribbean destination and it still has a low-key vibe, with few tourists.

But due to limited housing stock, homes, many perched on hillsides with expansive views, start at around $300,000. Not dirt cheap, but very affordable compared to many other Caribbean destinations. Typical costs of $50,000 to $100,000 were noted in International Living’s eighth issue.

Today, a two-bedroom home with ocean views and a swimming pool is available for $275,000. A home with three bedrooms on a hilltop (benefitting from sea breezes) and just five minutes drive from Little Bay, the current center of redevelopment, is available for $350,000.

Reading the Skyline for the Signs of a New Portuguese Property Boom.

Gut feeling isn’t a science, but it’s often worth taking seriously. Recently, I was at Porto Cathedral, looking out over this ancient Portuguese city, when I noticed an unusual number of construction cranes in operation. I counted 21 from my vantage point. Later, in a monastery garden atop a cliff on the other side of the Douro River, I had an even broader view and counted well over 40 cranes—a vast number for a population just over 200,000.

As a nomadic investor who’s put money to work on five different continents, I saw this for what it was: Proof that Portugal—particularly Porto—is back from the brink of the European debt disaster.

This now looks like a good place (and a great time) to invest in real estate here. Portugal is seeing record-breaking real estate growth, spurred by companies like Microsoft, Google, and German auto giants Daimler and Volkswagen that are moving in with good jobs. French bank BNP Paribas recently claimed more than 160,000 square feet of office space in Porto.

These companies are attracting local and foreign workers, thus increasing demand for commercial buildings and higher-end housing…which is why along with the construction cranes, Porto is packed with projects renovating a plentitude of beautiful 18th-, 19th- and 20th-century residential buildings.

And depending on how Brexit plays out, Porto could soon be overrun by Britons looking for an EU home.

In all, this is an opportune moment to consider Portugal in general, and Porto specifically.—Jeff Opdyke, International Living Contributor.

The two most popular islands in Southern Cambodia, Koh Rong and Koh Rong Sanloem, will be “joined” to form the kingdom’s first official island city.

The new municipality will incorporate this month, at which point it will have the official administrative status of a city, making it easier for the pair of islands to upgrade their infrastructure and improve facilities for residents and tourists.

The islands have already become the most prominent go-to beach destinations for Cambodia-based expats, adventurous Western travelers who are seeking paradise on a budget, and an ever-growning elite group of wealthy tourists from within Cambodia itself.

Tourism, hospitality, and real estate industry leaders have reacted positively to the news, with many noting the real estate opportunities possible with nearly 40 square miles of land on the two islands.

Located a little over 15 miles off the coast of over-developed Sihanoukville, the islands have taken a different direction than the mainland, a fact that hasn’t gone unnoticed by savvy developers who have already invested in the islands and the nearby vicinity.

The highest-profile projects to launch so far are the luxury resort Royal Sands Koh Rong, owned by one of Cambodia’s most respected conglomerates, and the luxurious Six Senses Krabey Island resort, which opened at the end of 2018 on its own 30-acre private island.—Steven King, IL Cambodia Correspondent.

Is Southern Italy the Next New Tax Haven?

A new flat tax scheme has been rolled out to attract retirees to move to southern Italy, promising a 7% fixed rate on foreign-earned pension and retirement investment income to those who move to the regions of Molise, Puglia, Basilicata, Calabria, or S0ic0i0ly.

This is a reduction from the existing tax rate scale that ranges from 23% to 43%.

The primary goal is to lure back Italians who have gone abroad, but also applies to foreign retirees who move their tax domicile to the south of Italy.

The plan aims to repopulate ailing towns which have seen a steady outward flow for decades. To qualify you need to move to a town of fewer than 20,000 people and reside there for at least 183 days a year. —Valerie Fortney-Schneider, IL Italy Correspondent.