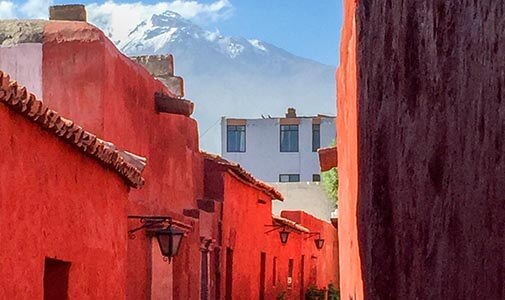 Paul Beckman, 70, is no stranger to living abroad. As a computer engineer, he has worked on IT contracts in various countries around the world, from France to Hong Kong to Belarus. Although he originally hails from Iowa, he spent eight years in Seattle, Washington, before recently retiring to Arequipa, Peru.

It’s fair to say that it’s a change of scene. With year-round sunshine and an average daily temperature hovering around 70 F, the colonial city of Arequipa in the south of Peru is one of the most livable locations in the country. Great restaurants, a vibrant cultural scene, and a spectacular backdrop of three towering volcanoes provide ample attractions for tourists and locals alike. Actually, that part has certain similarities to Seattle, but it’s safe to say that it doesn’t rain as much in Arequipa.

Paul’s life took a turn when he met his wife, Glenin, on a visit to South America over a decade ago. “I met my wife in Peru through some friends,” Paul explains. “I was here looking for some work possibilities, and then I went back to Seattle. We sort of wrote back and forth for two years, and then she said, ‘Well, you can come down here, and we’ll talk about a relationship.’ Well, I did come down here and she liked me, and I liked her, and I liked Peru, too.”

The couple have now been together for 11 years and have two little girls, ages three and 10.

“My wife is a lot younger than me,” says Paul, “and she’s a doctor. We had so many problems with her trying to get a license up in the States because she’s just an obstetrician. Unlike in the U.S., down here an obstetrician and a gynecologist are two different people, with different qualifications. We came back here so she could go back to school and get her gynecology certification.”

Paul and Glenin live in Cayma, a popular district near the historic center of the city. In this hilly neighborhood, narrow streets wind their way past a mixture of new apartment complexes and homes, as well as older traditional stone and brick structures. Arequipa’s centro is only a 20-minute walk away on the other side of the Chili River, which splits the city in a north-south direction.

“We rented for six months or so, and then the landlady decided that she wanted to sell,” says Paul. “Because we had become friends and we had always paid our rent on time and everything else, she agreed to sell it to us. We got a heck of a deal, about half price.”

Six hours away is the city of Puno and Lake Titicaca, with its burgeoning tourist market. This is the region that Paul’s wife hails from. Her mom lives in Ilave and her sister-in-law lives in Juli, both within 50 miles of Puno. Even with major developments on the horizon, most property there is still incredibly cheap.

“We’re remodeling a summer house on the small acreage. The larger acreage we’re just holding out. The hotels will be arriving in three or four years, but they are not going to go into Puno because it is already chopped up all along the lake. There are hardly any hotels in Juli at all, so it will be ripe for plunder.”

Although retired, Paul still keeps busy with a small retail computer shop he opened in the nearby Arequipa neighborhood of Cerro Colorado. There he retails a variety of IT products and works on computers that locals bring into the shop.

I have three major clients, along with my storefront.

Paul said, “I still have to make a living, and the other places we thought about living in would not have been big enough to support a computer guy. Right now I have three major clients: a travel agency, a law firm, and a mining company that I’m doing work for, along with my little storefront. That keeps me away from the house for a while because I go stir crazy there when I don’t have any work to do!”

In Arequipa, it’s not difficult to keep busy. Paul and his wife enjoy going to soccer games, visiting the many parks in the city, attending concerts, and dropping into the local tavern to watch a couple of their relatives play music. And they do a lot of sightseeing in the area.

“The nights are chilly here,” admits Paul. “Even in the summertime it gets a little chilly. But the temperature is not too bad, and the cost of living is fantastic compared to the States.” Paul figures they spend less than $1,800 a month, including school tuition for their daughters. Although they now own their place, it is easy to find two- or three-bedroom modern furnished rentals in the city for less than $600 per month.

And it’s hard to beat the climate. With very little rain and over 300 days of sunshine per year, it’s almost perfect. It’s a long way from Seattle, in more ways than one.