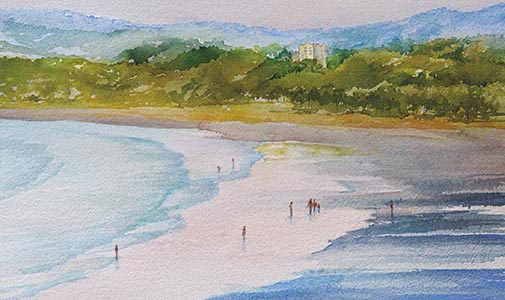 Life is so much easier when you live in a place with one level, whether it’s a home, luxury condo, or beach apartment. © Colleen Clapp

An inevitable part of aging is… well, you don’t get around on your own two feet quite as well as you used to.

Some health conditions exacerbate the problem, speeding up the timeline. In those cases, stairs to a second or third floor become a safety and convenience issue. Even landings, or rooms with multiple levels, can be a challenge.

If that’s a concern (or you, wisely, think it could be at some point), you don’t have to give up a dream to live your golden years abroad. Far from it.

Many countries are improving accessibility for those with mobility issues. And plenty of expats and locals find a way to get around. Plus, life is so much easier when you live in a place with one level, whether it’s a home, luxury condo, or beach apartment.

Jacó, Costa Rica: A Fun-Filled Life on the Beach

Once known as Costa Rica’s premier party town, Jacó has grown up in many ways. It’s still a busy beach town with plenty of fun to be had. But you’ll also find chic condos, gated communities, shopping districts, craft beer bars, smart boutiques, and more. It’s a walkable community, set on a wide bay on the country’s central Pacific coast, with the “main drag” paralleling the beach about two blocks inland.

It’s lined with restaurants, shops, and more, catering to both tourists and longterm residents, many of whom are North American expats who come for the year-round warm weather, laidback lifestyle of Costa Rica, and modern conveniences like top medical care, good shopping, and more. Plus, the country’s main international airport, with many flights to North American destinations, is just a 90-minute drive. A furnished two-bedroom ground floor condo one block from the beach—and close to everything else you want to do—is listed at $120,000. A three-bedroom home close to the beach and shopping, with a large fenced yard and private pool, is available for $249,000. It comes furnished.  See: Remaxocr.com.

Set in northern Portugal, the coastal city of Porto is the country’s second-largest urban area (but it doesn’t have an overwhelming big-city feel), famed for its port wine and brightly painted—and tiled—buildings lining the hills that rise from the banks of the Douro River, which empties in the nearby Atlantic beyond the estuary. It benefits from a temperate climate. The historic town center is a designated UNESCO World Heritage site with Romanesque, medieval, Renaissance, Baroque, neo-classical, and other architectural styles from a millennia represented, although the city’s heritage goes back to Phoenician and Roman times.

Aside from attractive surroundings, Porto expats also enjoy wine (and not just the fortified port) and food (try local fave francesinha, which is ham, sausage, and thin steak between thick bread slices covered in melted cheese and a tomato beer sauce, with a fried egg on top. Plus, golden-sand beaches that are only 15 minutes away.

A perennial favorite of expat retirees, Cotacachi, Ecuador, is a mountain town in the foothills of the Andes—it’s in a valley between two volcanoes—offers a low cost of living, a moderate climate, and good-value real estate.

The expat influence—there are just under a thousand in town—according to estimates, has brought gated communities and similar amenities. But it retains a traditional vibe with its strong indigenous culture and colonial architecture in the historic centro—think ornate bell towers, brightly painted homes with terracotta tile roofs, and well-kept plazas.

And there is plenty to do: expat clubs, farmers’ markets, craft markets, cafés, and restaurants serving up American fare.

This three-bedroom house is located in the center of Cotacachi, just three blocks from the main park and comes with an indoor pool and beautiful garden. It’s listed at $130,000. See: Santana-realty.com.

A Sunny Slice of Europe Along Africa’s Mediterranean Coast

The city of Melilla is located on the northern shores of Africa. However, the official language is Spanish, the currency is the euro, and it is administered by Spain. This makes it a part of the European Union, the North Atlantic Treaty Organization (NATO), and the Schengen Zone.

Melilla shares a land border with Morocco and faces east into the Mediterranean Sea. As a result, the city’s economy is based upon European trade with Morocco.

To encourage this trade, the European Value-Added Tax (VAT) is not applicable in Melilla. Instead, it has a very low, indirect consumption tax ranging from 0.5% to 10%. Also, personal income tax on income derived in Melilla is 50% less than in peninsular Spain.

Melilla was founded by the ancient Phoenicians. It was acquired by Spain in 1497 and has been administered by the country ever since.

The city’s architecture is a significant tourism draw. It has hundreds of modernist- style buildings and a massive harbor fortress built in the 1600s.

The city is only about five square miles in area and has a population of around 86,000 people. They can access mainland Spain by regular ferry crossings or through its airport.

Real estate prices vary. A studio apartment in the city center could cost as low as $66,000. However, a three-bedroom apartment along San Lorenzo Beach could cost upward of $220,000.—International Living contributor Shawn P. Mitchell.

Thailand has super deals in terms of rentals. Modern condominiums with contemporary furniture are everywhere, particularly in Thailand’s “Rose of the North”, Chiang Mai. Actually, without a doubt it is a renter’s market. There is a large range of units available, no matter where you are looking to rent. But renting in Thailand is a little different than doing so in the United States or Canada.

First, the asking price is negotiable. The longer the lease, the cheaper it becomes. So don’t be shy about asking for a discount, because you will most likely be successful. The next step is insisting that the lease is written in English. It is more difficult to get a bond back if the lease is in Thai.

A lease is an important document in Thailand for a variety of reasons. This is because you need it to get a “residency certificate,” which is essential to attain a Thai driver’s licence and purchase a vehicle, whether that is a motorbike or a car. In some provinces, a residency certificate is also necessary to change your visa.

A lease and/or a residency certificate will also be necessary if you wish to open up a Thai bank account. So, that lease is extremely valuable for many reasons. Keep it in a special folder so it is readily accessible, for an easier transition into Thailand.—International Living contributor Rachel Devlin.

Immerse Yourself in History in English-Speaking Valletta

The capital of the island nation of Malta, Valletta was founded in the 1500s, and it looks it.

With a town center full of grand Baroque architecture and surrounded by towering walls, you could forgive yourself for wondering what century you were in. Strolling around the city is a little like being in an open-air museum on a peninsula just a 3/5 of a mile long and 2,000-feet wide in the middle of two harbors. As you can imagine, this means the whole town is walkable. You never know what you might find strolling down its narrow streets. A modern city has grown up around it as well, so you won’t lack for any convenience.

And there’s always something going on: opera and jazz festivals, a thriving restaurant scene, theater, and more. And with Malta’s pleasantly mild Mediterranean climate, with more than 300 days of sunshine per year, you can enjoy the fun year-round. A studio penthouse in the middle of the action, with views of the city and the water from your private rooftop terrace, is listed at $219,081. For $403,572, you can get a two-bedroom apartment, sold fully furnished. See: Remaxmalta.com and Jkproperties.com.mt —IL editor Jason Holland.