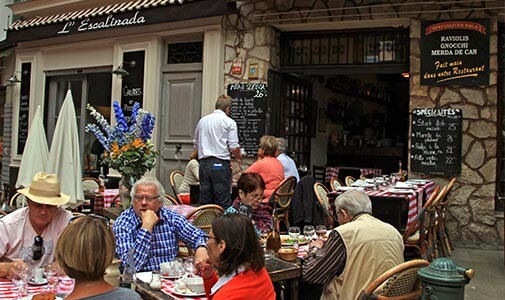 It was my first summer living in the South of France. My French was coming along, and, somewhere between bonjour and je ne sais quoi, I decided it was time to take the plunge. My husband, Nicolas, and I would attend our first summer festival.

In the summertime, festivals spring up in the seaside villages that dot the Côte d’Azur. Here, close to Toulon, many of them celebrate something called aioli, a tangy, garlicky type of mayonnaise and the accompaniments that go with it: seafood and cooked vegetables like potatoes, cauliflower, and green beans. From what I know of French cooking, everything has a plan and a reason for being. If pungent, kick-you-in-the-backside mayo goes with salt cod, so be it. We were just going to have to try it for ourselves.

Summer “aioli parties” were so prolific that I had no problem finding one in a town about 15 minutes from where we lived, La Crau. The tiny announcement on a local events website gave a phone number to call for reservations. At $16 a person, it seemed like a steal, so I took a deep breath, rehearsed my best French, and made the call.

A certain “Jimmy” answered the phone among a cacophony of clinking glasses, blaring French music, and boisterous laughter. “Oui, allô?”

“Je voudrais…I would like…to reserve, reserver pour l’ aioli, Saturday…trois personnes. We are three people.” It was pretty awful, but it worked.

As Saturday rolled around, we all donned our best summer apparel. My friend Kathy had the foresight to tie a small chiffon scarf around her neck. We couldn’t have been any more French if we’d tried. I tossed a mini English-French dictionary into my tote bag and hoped for the best.

As we reached the town center in La Crau, it struck me as a bit odd that, apart from a few older gentlemen playing petanque, the square was almost empty. I hopped out, dictionary in hand, and approached one dapper Frenchman who gave us the scoop on where we’d gone wrong.

It turned out that the aioli festival wasn’t in La Crau but in a “hamlet” of the town about another 15 minutes away. Back we piled into our tiny car, phones in hand, and began navigating the narrow roads that led to the village known as La Moutonne. As we climbed into the hills, the modern, slate-grey structures of the Côte d’Azur were replaced by terracotta-hued, stone-worked houses adorned with bougainvillea, flowering jasmine, and the odd village cat perched high up in a windowsill.

I finally saw a sign announcing La Moutonne come into view. It was a small victory, if a bit short-lived, because as we exited the car and made our way to the town square, it became clear that this wasn’t your average aioli festival.

The square itself was tiny, like an extended stone version of someone’s backyard. About eight tables had been set up for the evening, and a small crowd was gathering on the terrace in front of Jimmy’s Bar. Small children chased one of the many cats roaming about, a group of teenagers sat huddled in a corner over a tiny transistor radio, and an older gentleman in his 70s, dressed all in white, was ceremoniously waltzing across a makeshift dancefloor…to a music all his own.

A slim Frenchman emerged from the bar, glass of rosé in hand, cigarette dangling artfully from the corner of his mouth, and grinning ear-to-ear.

“Ahh, les anglais sont là!” The English have arrived. I decided this was probably no time to split hairs, as Jimmy made his way over and enthusiastically kissed us all on both cheeks.

“Bienvenue, welcome! Your table is right over here. You’ll be with Claude, Marie-Francoise, Martine, and Bernard. The wine is included, and the band starts at eight.”

We were in for a very special evening.

We all looked sheepishly in the direction of Claude, Marie-Francoise, Martine, and Bernard, who in turn, smiled, and waved us over to join then. After introductions were made, and we explained to our curious tablemates how we came to find their tiny village, I had a feeling we were in for a very special evening.

The aioli dish came and went, and as the rosé started to flow, we really did have a new set of best friends. They shared with us their lives in the villages, anecdotes about life in Southern France, and their passion for traditional Provençal food— aioli being a big part of it. It was closer to nine when the band took the stage, belting out 80s cover tunes with decidedly French overtones. Bernard graciously rose and offered his hand to accompany him to the dancefloor for Lionel Richie’s “Hello” while Kathy got whisked away for a few “Billie Jean” moves with Claude.

By the end of the night, we’d all done a slow dance, or two, with La Moutonne’s resident “Don Juan,” Pierre—the elegant gentlemen we’d seen dressed in white who was indeed a fantastic dancer—and participated in a conga line with everyone else. Seeing the whole village rolling with laughter as we snaked our way around the square to the tune of “Super Freak,” I knew I’d found my kind of Southern France. One that was much more open and accepting than I’d ever imagined.