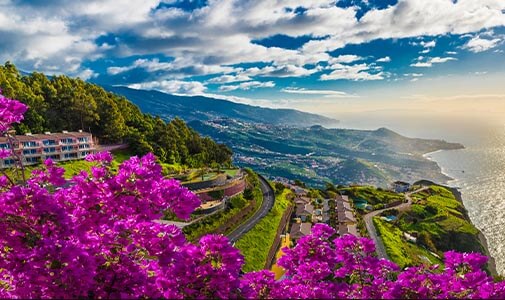 Initial impressions can be so telling. Within minutes of leaving the airport I sensed the dizzying scale of Madeira’s mountainous peaks and craggy cliffs. I saw houses surrounded by blazing bougainvillea and banana leaves, the vegetation offering clues as to what to expect.

High-rise buildings on this mid-Atlantic Portuguese island are mercifully few. Instead, it’s a landscape of hilltop villages with terracotta roofs seeming to sprout from the terraced cultivation carved into the mountainsides. Dramatic doesn’t even begin to cover it.

I never knew that Madeira, the Azores, the Canary Islands, and Cape Verde are known collectively as Macaronesia. Nor that Madeira is best known these days as the birthplace of soccer star Cristiano Ronaldo (nor did I know that he was named after Ronald Reagan—his father’s favorite actor).

But for those without an interest in soccer, the island is still best known for its fortified wine. The sweet, aromatic, and complex brew is a little like port in its potency. The drink has a long history— Shakespeare chose it as the favorite tipple of his best-loved coward, Falstaff, in Henry IV, and the salt tang the blend picked up from being shipped by sea was a defining characteristic in past centuries.

Exploring the capital of the island, Funchal, is a sensory riot. In the Old Town zona velha I enjoyed browsing the Mercado dos Lavradores (Farmers’ Market). It’s bustling, fragrant, and bright, with sections devoted to fish, meat, and produce. Traders display their wares in pyramid piles amid the traditionally tiled walls, high ceilings, and mosaic flooring.

Samples of fruits including prickly pears, loquats, paw paws, and pineapples were sliced onto my palm to taste, including four types of passion fruit. Madeira, although it is a region of Portugal and not an independent state, is actually closer to Africa than it is to Lisbon. The resulting sub-tropical climate offers a wide variety of fruits that you’d more readily associate with Asia than Europe. It’s a riot of color, which gets even more vibrant in the flower section of the market, where traders wear distinctive traditional outfits of red and yellow striped skirts along with red vests and capes.

To get a better sense of the island’s natural bounty, it’s worth exploring a little. Of the many gardens and parks on Madeira, I most loved the multi-level Tropical Garden at Monte Palace in the north of Funchal. From the palatial house at the summit, you descend along pathways flanked by exotic palms, ferns, and flowers, enlivened further by contemporary sculpture, 17th-century tiled murals, and landscaped features.

I found orchids, azaleas, hydrangeas, sequoias, acacias, and a laurel forest alongside thousand-year-old olive trees. Koi fish that live for up to a century swim in water features below the resident swans and peacocks. It was uplifting to stroll along the many elegant avenues of cobblestone walkways adorned with niches and arches, coats of arms, and Hispano-Moorish tilework.

A white-knuckle descent in a wicker basket.

Another perennial highlight of a trip to Funchal is the climb up to the Nossa Senhora church at Monte (on the feast of Assumption, pilgrims climb up the steep flights of steps on their knees to pay homage to the statue of the Virgin). The climb, though, is not the highlight. If you’re the adventurous sort, sledge runners called carreiros take passengers on a white-knuckle descent in a wicker basket on wheels down the narrow streets of Funchal.

The ride takes between five and 10 minutes, costs about $33, and rattles down some impressive gradients at up to 30 miles per hour. Carreiros dress in white outfits, sport straw boaters and special braking shoes, and possess an attitude—much like Venice’s gondoliers—that gives off an air of assurance and indifference. Expect to wait in line; the descent is a popular attraction.

The next day I boarded a catamaran in the hope of seeing whales, dolphins, and turtles out to sea. Various outfits run trips from Funchal’s harbor area, many offering a second trip for free if you don’t see cetaceans on your first go. Excursions last for about three hours and cost around $35. It’s best to go when the sea is calm, as it can get quite choppy. I saw two whales. An absolute treat, and one to cross off the bucket list.

Afterward, I strolled along the long seafront promenade to a winning combination of birds chirping and dogs barking. At any given spot on the ramble, strollers were pushed, footballs kicked, lovers ambled, professionals jabbered on their cellphones, dads carried children on their shoulders, while grandparents chatted in the shade.

On another day, I drove as far as São Vicente on the north coast. It’s easy to forget that for an island to exist in the middle of an ocean it has to have a proper mountainous spine. And it was in these alpine mountains with forested valleys and grassy slopes that I found the best walking and hiking, especially along the levadas—a centuries-old and still effective system of irrigation channels. The coast on the northern edge of the island is untrammelled and dramatic. Cliffs plummet to the ocean while huge breakers thump and explode as they hit the rocks. It feels like the sea’s fireworks!

Above the main promenade in Funchal is a magnificent salmon-pink edifice, known as Belmond Reid’s Palace. It’s not a budget option at around $300 a night, but it does come with serious pedigree. It belongs on a list of the world’s glamorous historic grand hotels, alongside London’s Ritz, Istanbul’s Pera Palace, and Havana’s Nacional. The Nobel-winning playwright George Bernard Shaw signed up for dancing lessons here at the ripe old age of 71. Winston Churchill stayed in 1950 to write some of his memoirs. And it was the choice of residence for General Batista, Cuba’s long-term ruler. After being ousted by the Cuban Revolution, Batista took over the entire third floor of the hotel for his family and entourage.

The scenic and stylish “done thing” is to take high tea on the balcony overlooking the pristine garden below, which winds down cobblestone paths enlivened by exotic plants to a tidal pool carved into the rock of the cliffs. I was stopped in my tracks by a purple and turquoise “jade vine” bud cascading from its branch. Luxury and nature neatly intertwined.

Extending from the hotel foyer is a narrow walkway down to the hotel’s Ristorante Villa Cipriani. This branch of Cipriani’s has a rustic, traditional feel, with red gingham tablecloths. But the seafood on the menu couldn’t be fresher, coming straight up from the ocean below.

On another evening I enjoyed the Michelin-starred William Restaurant on Estrada Monumental. This is where Chef Luís Pestana showcases his innovative approach to local, seasonal produce. It has panoramic views of Funchal’s sparkling lights and overlooks Cliff Bay.

For a more modest, although still elegant stay, only 20 minutes from the airport and set beneath the city’s western escarpment is Quinta Jardins do Lago. This newly converted hotel has manorhouse origins. Recent extensions are sympathetic to the original 18th-century building and are furnished with appropriate antiques. One much-loved “feature” is the hotel’s 61-year-old tortoise, Colombo, who has roamed freely ever since dropping from a previous owner’s son’s pocket on his return from the Galápagos. These days, it takes four grown men to lift Colombo.

The charm of this 40-room boutique hotel is in its civilized pace and tranquil ambiance, the studied attention of the staff, and the locally sourced produce from its gardens. At its Beresford Restaurant I started with fresh cheese in crispy filo pastry, pineapple salad, yogurt, and sugar cane honey, before enjoying a roast chicken breast with lemon and thyme, watercress gnocchi, and cherry tomato. The clientele is small enough for the service to feel personal, and the delivery of courses resembled a dance.

Though there are the inevitable import costs to such a far-flung island, most of the food on offer is locally sourced, and so the cost of day-to-day living is reasonable. Like everywhere else in Portugal, budget bars and restaurants won’t stretch the wallet too far. Intersperse treats at the likes of Cipriani’s or the Quinta with simpler fare at any number of more modest establishments. The area around the Mercado dos Lavradores is a safe bet for a hearty dish of the day. Look for prato do dia and you’ll lunch well on soup, main course (usually fish, pork, or chicken) and a drink for under $12 per person. Don’t go to Funchal expecting beaches or nightclubs. It has both, but they’re not the primary focus of the city.

Because of its latitude, Madeira’s climate is a steady 75 F to 80 F in summer, dropping to around 60 F in winter. However, the weather can be changeable, with clouds scudding by, so take a selection of lightweight clothes. It’s all about layers. And don’t try to drive around Funchal unless you’re fully briefed on directions. The steep, narrow, cobblestone lanes can be challenging, especially if you end up having to reverse to let a school bus through a tight alleyway. It happens.

The unlikely Portuguese phrase viajou na maionese translates directly as “I travel in the mayonnaise.” You can interpret that a number of ways, but if it has anything to do with moving slowly through a rich landscape, with a dash of luxury thrown in, then it perfectly sums up my experience of Madeira’s leisurely charms.

Editor’s Note: If you’re considering Portugal for your overseas retirement, our Portugal Correspondent Tricia Pimental is the best person to give you the lowdown on all that this European gem can offer. Whether you like the idea of village life in the mountains…or you’re more of a beach person and are drawn to the sound of the ocean…or you thrive in the bright lights of a big city, Portugal offers it all. In Portugal 101: Your Blueprint for an Affordable European Lifestyle, Tricia hands you all the information, recommendations, tips, advice, and insights about living, traveling, and investing in Portugal you could ever need…in one place…in living color…on video. Access it now.