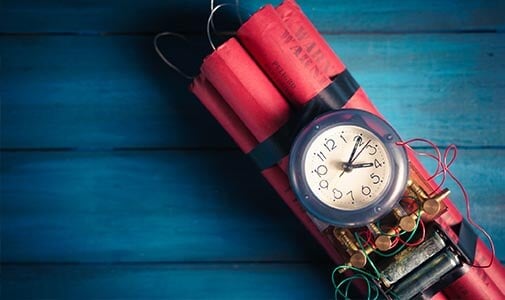 With the right advice and knowledge, you can avoid leaving your heirs a financial time bomb. © Fergregory/iStock

Buried deep in the 2019 year-end omnibus federal budget legislation is an obscure new rule that can saddle your children, grandchildren, nieces, and nephews with a surprising and excessive tax liability.

This bill was long promoted by the financial industry and enjoyed strong bipartisan support in Congress. The most important improvement for individuals was a delay in the age at which you are required to start making minimum withdrawals (Required Minimum Withdrawals or RMDs) from your deferred-tax accounts (such as IRAs, 402(k)s, 403(b)s etc.)

Under the old rules, a child inheriting deferred-tax funds would generally be required to make minimum withdrawals based on life expectancy at that point—as defined in the IRS Table I (Single Life Expectancy—For Use by Beneficiaries).

For instance, the withdrawal rate under this rule for a non-spousal IRA heir at age 50 would be based on 34.2 years for that age, a 2.92% starting withdrawal rate. It is not hard to envision market rates of return on that inherited IRA that would easily exceed the minimum withdrawal. As a result, the balance would likely maintain or even grow over the years, possibly leaving an even bigger inheritance to pass on to the following generation.

Only 10 years to liquidate the whole balance.

Here’s the new rule hidden in the SECURE Act that can blow up on your heirs: Most non-spousal inheritors of these accounts must withdraw the entirety of the deferred-tax accounts within 10 years of receipt. That’s a total of only 10 years within which to liquidate the whole balance—including any earnings on the accounts in the interim—so that all the funds become fully tax-paid. That’s good for the IRS, not so good for your heirs.

Consider this example to expose the potential impact on your heirs. Clarissa is a 50-year-old single woman at the peak of her professional career, earning $175,000 annually. She inherits an IRA in the amount of $500,000 from her mother during this year. (Although her mother previously inherited the IRA from her spouse, she remains able to rely on the previous, far more generous IRS Table III factors for minimum withdrawals because she is an inheriting spouse.)

Since Clarissa is a non-spouse (and non-disabled) inheritor, she must withdraw the entire $500,000 from the account along with any earnings over the following 10 years. If she earns 8% annually on the funds (within the historic range for a mixed portfolio), that’s an additional $40,000 the first year.

Suppose she withdraws around $70,000 each year. That might liquidate the account in about 10 years, as the returns on the remaining balances drop over time.

Clarissa’s parents didn’t pull all that money pre-tax out of paychecks way back in their working careers only to have it all be taxed at an even higher rate than they would have paid for it in their day.

While this legislation is brand new, here is a primary consideration to raise immediately with your investment or tax advisor. Specifically, anyone in the position of Clarissa’s parents should look to withdraw additional funds beyond any RMDs from their deferred-tax accounts and convert them into after-tax savings.

How much and when? These are the tricky decisions.

As a starting point for discussion, they at least want to consider withdrawing up to the next tax bracket. For instance, if they are retired at 66 with little other income while waiting to claim Social Security later, withdrawing $100,000 from the IRA would result in $8,305 of federal income tax—an overall 8.3% rate.

Suppose that they are collecting $36,000 of combined Social Security benefits. They could still withdraw around $70,000 and pay about the same overall tax amount.

For the vast majority of folks, these after-tax savings will pass tax-free to their non-spouse heirs. Obviously, the timing of such extra withdrawals depends on the age of the parents, their other taxable income sources, and the amount set aside in such deferred-tax accounts. Still, with a bit of planning in advance, Clarissa may be spared hundreds of thousands of dollars in otherwise avoidable taxes.

And that’s surely what her parents would want for her.