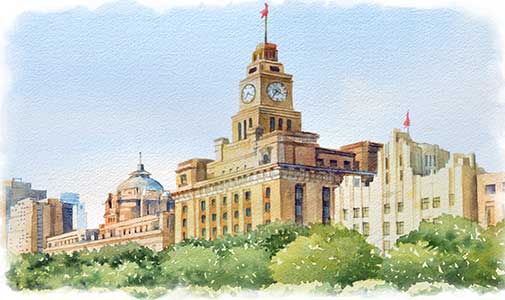 The imposing grandeur of Shanghai’s Bund is a study in contrasts. © Colleen Clapp.

When you take your first steps onto Shanghai’s Bund waterfront, you’ll feel like you’ve been transported to another continent, a century back in time. More than 50 striking early 20th-century commercial buildings line the street, once the headquarters of the world’s East Asia-based banking and trading houses. Financiers and industrialists from the global powers of the era built grand stone buildings in various Western architectural styles—Beaux Arts, Art Nouveau, and Gothic Revival, among others—creating a dramatic skyline along the west banks of the Huangpu River. The Bund, which stretches over a mile along Zhongshan Road, treats visitors to a living gallery of architectural history.

Many of the old buildings no longer house their original banks and financial institutions. The Russo-Chinese Bank Building is now the home of the Shanghai Gold Exchange. China Merchants Bank took the place of the Bank of Taiwan Building. And the Shanghai Club now houses the Waldorf-Astoria Shanghai Hotel. The Customs House, built in 1927, is one of the few structures still used for its original purpose. Its clock tower, marble columns, and tiled octagonal dome distinguish this grand building.

Old and new Shanghai meet here in startling contrast: Looking across the river affords the best views of Pudong, Shanghai’s futuristic financial center, while the Old City, with its jumbled streets, wooden houses, gardens, and ornate temples, lies just south. A recently restored waterfront graces the street directly across from the historic buildings of the Bund. It’s a pedestrian friendly promenade comprised of pavilions, parks, and plazas designed for rest and recreation. As evening approaches, the major buildings of the Bund and Pudong are illuminated, making it an ideal time for photography. Cruise boats, with trips starting at around $18, offer another option for viewing the area.

Getting to the Bund is simple on public transportation. Take Metro Line 2 to East Nanjing Road; the Bund is a five-minute walk from the station.

“Right in the heart of Sanur is the Blanjong Temple,” writes IL Correspondent Jo Brierley. “What is lesser-known is that it houses one of the oldest preserved inscriptions in Bali. The Blanjong Pillar dates to 914 AD and confirms contact between, Bali, Java, and India. Its inscription is written in Old Balinese and Sanskrit, describing then king Sri Kesari Warmadewa’s military prowess. Originally discovered in 1932, it remains enclosed in a glass case and holds special meaning to the Balinese people.”

“One of the great unsolved archaeological mysteries is the Costa Rican rock spheres,” writes IL Correspondent Kathleen Evans. “Discovered in the 1940s in the delta of the Térraba River, the balls range in size from a few inches to over a yard in diameter. Almost all of the estimated 300+ balls are made of granodiorite, a hard, igneous stone. Experts claim the spheres were made between 200 BC and 800 AD, but their function is unknown. Today, you can view a collection at the National Museum in San José.”

“Tiny in size, this rustic former Franciscan convent is the essence of simplicity. Huge granite boulders, protective foliage, and extensive use of locally grown cork panelling for outer protection and inner décor make this diminutive architectural gem a must-see when in the area.”