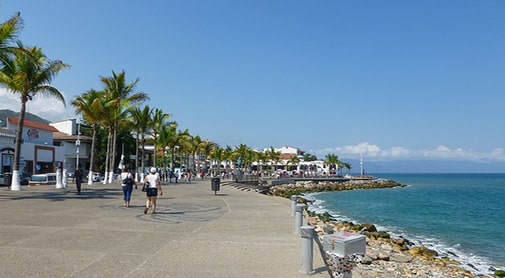 Puerto Vallarta is one of Mexico's most popular resort towns.

Located on the glittering Bay of Banderas midway down Mexico’s Pacific Coast, Puerto Vallarta is one of the most popular resort towns in all of Mexico. People flock to the beachfronts and cobblestone streets of its ornate old town center for hot weather, dramatic scenery, and vibrant culture.

Founded as a fishing village in 1851, it thrived mostly due to its location on the vast bay that connected both the Cuale and the Ameca rivers. It gained municipal status in 1918, and in the 1950s, writers and artists from both Mexico and the U.S. realized it sparked their creativity.

Perhaps those aspiring artists and writers would have liked Puerto Vallarta to remain their secret haven forever, but history altered that dream. In 1963, an American film director named John Huston arrived and decided Puerto Vallarta and the surrounding areas were the perfect spot to film his movie The Night of the Iguana. Huston had a passion for travel and adventure, and it didn’t take him long to fall in love with Puerto Vallarta.

Although The Night of the Iguana, based on the play by Tennessee Williams, remains a cult classic, it was as much the scandal surrounding the film that was responsible for its popularity as the actual plot. The star-studded cast, which included Richard Burton, Ava Gardner, Deborah Kerr, and Sue Lyons, drew the crowds to the movie theaters. (The mostly shirtless duo of Pepe and Pedro shaking their maracas in several scenes didn’t hurt either.)

But above all, it was the notorious scandal of the adulterous duo Richard Burton and tag-along lover Elizabeth Taylor blatantly flaunting their affection that made the world notice Puerto Vallarta.

Plan your Night of the Iguana Tour

You can’t spend much time in Puerto Vallarta without hearing someone talk or ask about The Night of the Iguana or, more specifically, Liz and Dick. You could plan a themed vacation based solely on venues connected with the film.

The Rhythms of the Night Boat Tour is one of Puerto Vallarta’s most popular activities. Buy tickets ahead of time online at Vallarta Adventures or haggle with a vendor on the Malecón (main seaside promenade) or Olas Altas street once you arrive. Either way, it shouldn’t cost you much more than $100 a person. And it is well worth it. The libations and raucous entertainment are plentiful on board the boat.

Huston had a passion for travel and adventure.

On arrival at the candlelit Caletas Cove, a delectable buffet awaits. After your meal, get ready for the amazing show in the outdoor theater with indigenous dance, costumes, and lots of fire. Caletas was the playground for longtime resident and infamous partyer John Huston. He kept a home there long after the release of The Night of the Iguana.

If you want to experience a very laidback day with unbelievable beaches and scenery, head south to the village of Mismaloya by bus, cab, or if you’re at the Puerto Vallarta Marina, by boat. You’re not much more than a half hour away from Puerto Vallarta. Here you can almost hear the confrontation between Gardner and Burton and imagine Deborah Kerr comforting tied-up Burton as he squirms in his hammock. (What happened between Ava, Pepe, and Pedro as they made their way down to the beach, we shall leave to the imagination).

A small path from some of the beach eateries will lead you to the actual spot where they filmed a good portion of the movie.

Cuatro Vientos and Chez Elena make up a charming boutique hotel and adjoining exquisite restaurant on Matamoros Street. It is just up the hill from Our Lady of Guadalupe Church near the north end of Los Muertos Beach. The hotel has thrived under the leadership of Gloria Whiting for over 38 years, and Gloria has hosted a lot of famous customers. She may stop by your table and tell you about her days socializing with Richard Burton, Elizabeth Taylor, and John Huston. But even if you don’t get a chance to meet Gloria, the fabulous food and knockout sunsets on the rooftop are well worth the trip.

Archie’s Wok on Rodrigues street by the Pier is one of the oldest restaurants in Puerto Vallarta. Their first cook was also John Huston’s chef at Caletas Cove. Huston and his daughter (the actress, Angelica) would dine there often. The serene atmosphere includes historical artifacts to peruse, and the food does not disappoint.

John Huston’s friend, Humberto Esparza, commissioned the artist Carlos Ramirez to sculpt a statue of the famous director and had it revealed in 1988 to commemorate the 25th anniversary of The Night of the Iguana. You will find Huston’s statue at Isla Rio Cuale on the way to the footbridge bringing you to Gringo Gulch and Casa Kimberly.

Casa Kimberly, the house that Dick bought for Liz is now a very fancy restaurant and museum, complete with mariachi bands. If you’re into the Liz and Dick legend, you need to go here. But, you also need to make a reservation way ahead of time and bring your dress clothes.

All these destinations immerse you in heavenly sea and mountain vistas, ridiculously delicious food, history, and art. Puerto Vallarta is a stunning location regardless of any movie.

Editor’s Note: Mexico is a vast country with boundless variety. To figure out where it’s best retirement destinations are…you might need a helping hand. That’s why we’ve put together Mexico 101, an online virtual tour of the country. It’s the fastest, most efficient, and most cost-effective way to get you quickly ramped up so you can get from where you are now to the idyllic spot in Mexico that’s right for you. Get your copy here.