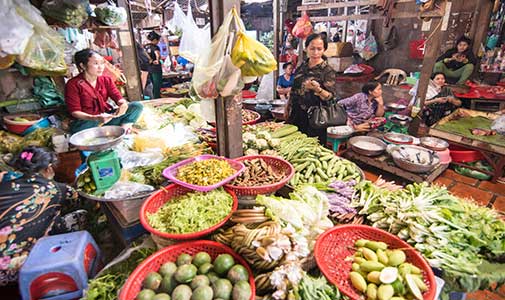 The morning sun is indiscriminate, glittering equally off the surfaces of 21st-century glass-and-chrome skyscrapers and the filigree carvings of 600-year-old temples. Streets teem with more early risers than you’ll encounter in most major Asian cities, while the timeless Tonle Sap River carves a stately passage through historic, business, and residential districts. Phnom Penh is a whirlwind of a capital city, brimming with so much charm and character that it has been famously dubbed the “Pearl of Asia.”

It was high-living French colonials who popularized the term in the 1920s, and it’s easy to see why the phrase is still widely used. The grandeur of the Royal Palace and National Museum present exquisite examples of Southeast Asian ceremonial style, while the buildings and boulevards in the Old French Quarter reflect an aesthetic that would not be out of place on the Croisette promenade of Cannes. Wat Phnom hill temple sits serene at the heart of the capital, seeming as timeless now as when it was built in the 14th century. These are only a few of the city’s jewels.

While the majestic stone temples of Angkor Wat in Siem Reap remain Cambodia’s top travel draw, more and more visitors are adding Phnom Penh to their itinerary as a “must-see” destination.

Tourism is on a surge, with a record 6.2 million international arrivals last year alone, yet Cambodia is more than just a vacation destination. This is a country on the rise, with the seventh-fastest-growing economy in the world and increasing foreign investment. It is currently experiencing the biggest property boom in its history.

Two years ago, it didn’t make much sense to look at serviced apartments or condominiums with swimming pools and gyms unless you had money to burn. Supply was limited so developers only targeted people willing to pay sky-high rents, rarely pricing less than $1,500 a month for entry-level units.

At the time, most expats preferred renting local apartments, usually located on the second or third floor of a townhouse with the landlord living on the ground floor. Rents for this kind of accommodation haven’t changed much since then, and one-bedroom apartments in central locations with separate kitchen, living area, and balconies are available from $250 to $400 a month.

Why pay 10 times more, the thinking went, simply to get access to a gym and swimming pool? Particularly when annual sports club memberships are available for $500 and offer similar facilities.

Then suddenly the real estate market changed, as a seemingly never-ending stream of new-build condominiums and serviced apartments began to launch and compete for tenants.

According to reports by CBRE and Knight Frank, the supply of condominiums in the capital rose from under 3,000 units in 2015 to over 22,000 by the end of 2018. What’s more, supply is expected to keep expanding to as many as 38,000 units by 2020 (if all planned developments reach completion).

The boom has transformed Phnom Penh from a low-rise capital to a city beginning to soar with serviced apartments, skyscrapers, and shopping malls. As a result, it has never been more affordable to find luxury property in a real estate market where renters hold the cards.

The Expat Appeal of an Exotic Kingdom

Cambodia’s deserved reputation as a safe, welcoming, and foreigner-friendly nation has established it among the top expat hotspots in Southeast Asia. Having one of the most affordable costs of living in the world and the introduction of compelling retirement visa options boost its attractiveness even further.

The expat population is steadily growing, with a diverse mix of people from all walks of life including seasonal snowbirds, retirees on fixed incomes, entrepreneurs, corporate professionals, and baby boomers looking for adventure.

Most Westerners here are from the United States, with 250,000 Americans traveling to Cambodia each year. Around 20% are here as expats with 12,500 working or running businesses, and 37,500 on long-term visas for retirees, volunteers, and academics.

The majority are based in Phnom Penh, which, as the largest city, has all the modern conveniences you could want with a veritable United Nations of international restaurants and shops selling everything from brand name electronic goods to organic vegetables at local prices.

At the same time, the capital still retains a very local atmosphere. Phnom Penh isn’t a generic Asian city, and I doubt it ever will be. It embraces modernity, but the Cambodian character resists the bland internationalism that sometimes comes with economic progress. What this all means is the expats living here get to enjoy the best of all worlds while benefiting from major cost-savings, especially on property rentals.

The Most Popular Places to Live in Phnom Penh

Three neighborhoods in particular are the most popular places for expats in Phnom Penh, with each having its own merits and benefits:

Boeung Keng Kang 1: BKK 1 has been the go-to area for expats since the 1990s. One reason is that it is very centrally located between the city’s main boulevards. That said, it can feel more removed from the urban hustle and bustle than you might expect. Residents get to enjoy a suburban atmosphere, as well as tree-lined streets, organic markets, shopping boutiques, cool local coffee shops, dozens of international restaurants, family-friendly places to hang out at in the evenings, and free meditation classes at Wat Langka temple on Street 51.

Boeung Keng Kang 1 is certainly one of the best areas in the city to enjoy a lifestyle upgrade. The cost to rent a subdivision condo in a local townhouse has barely changed in a decade, with landlords happy to lease parts of their homes to friendly foreigners for as little as $250 a month.

In addition, many of Phnom Penh’s first serviced apartments were built in BKK 1, and, while some still ask for excessively high rents, a new wave of reasonably priced developments are offering one-bedroom apartments in the region of $600 a month. As an example, an apartment that’s currently on the market has a large double bedroom, kitchen, living room, and balcony, which comes with a range of perks from shared swimming pool and gym, to internet and cable TV, cleaning service, and 24-hour guard, all included for $600 a month: See: Barefootproperty.net.

Daun Penh: Phnom Penh’s historical center, Daun Penh, is home to many of the city’s architectural marvels such as Wat Phnom temple, the Royal Palace along the Riverside, and the Old French Quarter. The Colonial Post Office Square, Raffles Le Royal Hotel, and the art deco Central Market have been painstakingly restored, creating an eclectic European/Asian ambiance for those who live in the area.

Daun Penh’s proximity to the Central Business District and the huge U.S. Embassy has driven demand for new high-rises, which add to the district’s architecturally diverse backdrop. Properties are highly sought-after in the tourist season, but rents for local flats on long-term leases are still very affordable. A two-bedroom, two-bathroom renovated apartment with its own balcony (perfect for evening cocktails) is currently listed at only $400 a month. This is quite a deal, but there’ll always be more like it. See: Ips-cambodia.com.

Toul Tom Poung Market: It’s also known as “Russian Market”—a nickname given to the thriving local market area when, as a quirk of Cold War history, Soviet products briefly supplied the local consumer economy. Nowadays, the market is a big hit with visitors and has evolved into the hub of a local expat scene with its main focus on the restaurants and coffee shops there.

Toul Tom Poung is also popular with those who aren’t as interested in the higher-end attractions of BKK 1. That, mostly, means families, missionaries, volunteers, and teachers. The area has had its own mini-boom of development too. Options include one-bedroom serviced apartments with every mod-con you could wish for: community pool, gym, 24-hour security, cleaning service, cable TV, and internet for a mere $450 a month. See: Realestate.com.kh.

How to Pay Less for Rentals in Phnom Penh

Sometimes Asian markets don’t always follow the same supply-and-demand concepts more common in other countries. Many who purchase property view it more as a land bank in which to store their wealth. They may have no tenants, but that doesn’t matter if the perceived value is the property. Which is why developers keep building, and investors keep buying.

But this isn’t always the case, especially if the owner has financial commitments and is relying on the property to generate income. The trick is to identify high-quality developments where people have invested large sums of money and are willing to reduce rents for long-term tenants.

All you need is an internet connection to check the top property websites in Cambodia, such as Khmer24.com, Bongthom.com, Realestate.com.kh, or Ips-cambodia.com. Simply look for listings of prominent developments that have great facilities in prime locations and you will soon find a landlord or agent open to negotiation. Be prepared to haggle, but in a friendly way.

The best example of this approach was shared by a Californian friend when his wife held a housewarming dinner at their new (and quite luxurious) apartment. After dinner we went for a rooftop tour to see the expensive-looking infinity pool, fully equipped gym, and expansive views of the Phnom Penh skyline. Before I could finish asking how much it was costing him, he burst out laughing before letting me in on the secret.

“Obviously, we aren’t paying anywhere near the asking price. The owner was so mad at his agent for not finding a tenant he decided to take care of it himself. My wife and I had the good fortune to see his listing a few days later, when he was really eager to close the deal. After playing hardball over a one-year lease, he agreed to a 20% discount. Then we doubled-down and asked about a two-year arrangement.

“The landlord eventually saw the benefit of agreeing on $650 a month. We got a really sweet deal for a modern two-bedroom, two-bathroom penthouse in the city center. You can’t rent anything in California with this kind of money. Maybe you’d get a couple of nights in a motel. The idea that we could easily afford a luxury penthouse in Phnom Penh totally floored us. I don’t think we’ll ever want to leave.”