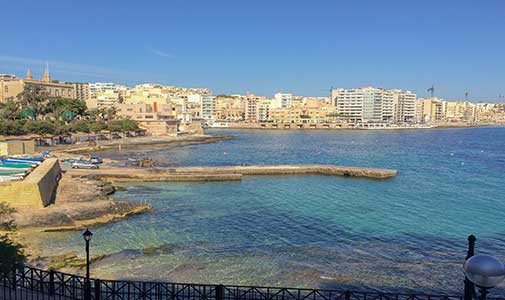 “A few years ago, my brother had a severe health scare, and I realized that life is finite,” says Eric Hungerford. “Why wait until you have all the money in the world? That will never happen. Why not go now with whatever money you do have?”

In 2017, Eric, 64, and Larisa, 47, attended an International Living conference in Arizona. “The conference gave us confirmation that we really could move overseas or be roving retirees. It was a dream for us, but we didn’t know anyone else who had done it. The conference gave us the confidence we needed. We actually could do it; it really was possible,” recalls Eric.

Eric and Larisa always loved to travel but got tired of going places for one week at a time. “We didn’t get to really experience the culture in that amount of time. We wanted to feel more like locals than tourists,” says Larisa. “We moved overseas in our minds long before we ever made a move.”

After the conference, they decided to start their roving retirement in Penang, Malaysia. “We were actually saving money by living in Malaysia for a few months,” says Eric. “It is so much more affordable than the U.S. We didn’t have to dig into our savings for anything. I bought two tickets to Malta and a new smartphone, and I’m still under our budget.” Their $3,500 to $4,000 budget is based on Eric’s pensions. He was a lieutenant colonel in the Army, as well as a teacher. “We don’t have a nest egg and have very little savings. That sets the tone for our choices,” says Eric. “We use Airbnb or VRBO to find rentals and stay as long as the visa will allow us to, unless we cut it short for a new adventure. We can negotiate for better rates because we are staying longer.” Staying longer helps with other aspects of budgeting too. “Once you get to know a few people,” says Larisa, “they show you where to go to live like a local; where the best cheap eats are, what market to go to.”

In Penang, Eric and Larisa found an apartment in the Pulau Tikus neighborhood that was close to everything. It was within walking distance to loads of restaurants and hawker stalls, as well as close to markets and grocery stores. George Town, the capital of the island province, was just 10 minutes’ drive away. They spent $842 on their first month’s rent and then negotiated down to $700 for the next month. For that, they got a three-bedroom, two-bathroom condo with a large balcony.

Working out and staying fit is vital to them both. They joined Jungle Gym, an outdoor gym around the corner from their apartment, for $25 a month. The gym offered small group training for less than $5 a class. “It was a great way for us to meet locals. We met a bunch of like-minded people, which made our time there even better,” says Eric.

Another way to get involved in the community is by making use of your native English skills. “We try to find groups or clubs for people that want to practice speaking English,” says Eric. “And many English schools will let you come and speak with students.” Church is another way to meet locals and expats. It is nice to feel like you have a little community in a new place, especially when you’re only living somewhere for a few months at a time. “Time flies by quickly, and, before you know it, we are leaving,” says Larisa.

Top Tips For A Roving Lifestyle

1. If you go to an expensive country, choose a cheap place next.

2. Join a volunteer/work site, especially in the more expensive countries.

3. Be sure to call the credit card companies and let them know where you are going. Otherwise, they might put a hold on your card when you try to use it.

4. Take it slow and see what comes up. Be open to everything.

5. Live like locals, not tourists. Go to the local markets, eat where they eat. Talk to everyone.

6. Join a gym, or workout club—it’s a great way to meet locals and expats.

7. Find groups or schools where people want to practice their English—it’s another great way to meet locals.

8. Try to travel within one region at a time. It will keep your flying costs down.

One of the best parts of being a roving retiree is the adaptability. For Eric and Larisa, choosing where to go next is half the fun. “We get to flip a coin and pick a place off of our bucket list,” says Eric. “Cuba, Belize, Vietnam, Ecuador? We have a big bucket list,” adds Larisa.

Right now, they’re in Europe. Larisa decided they’d check out Malta for three months. As a Russian native, one of her dreams is to become an English translator, so she is attending school there to better her English skills. “The hallmark of our plans is flexibility, although we aren’t planning too far ahead,” says Eric. “Nothing is written in stone, if you don’t love a place, you want to follow a dream, or just want to follow the sun, simply pack your bags and go for it. No long-term lease or furniture to deal with. It is perfect for commitment-phobes.”

They found an Airbnb for their Malta stay: a three-bedroom, two-bathroom penthouse right by a marina in the small seaside town of St. Julian’s for $1,400 a month. A simple lunch of pizza and water in Malta is $5.75, and a bottle of wine is even cheaper at $3.50 to $4.50. So finding affordable food is easy. When Larisa isn’t in school, they are making friends with their neighbors and wandering around the historic town.

Having a three-month visa forces them to choose the next location pretty quickly. And while staying in Europe is a possibility as long as they leave the Schengen Area, they are feeling the need to go somewhere cheaper and warmer. “We’ve got to recoup what we’ve spent the last few months,” says Eric.

Even though they saved money in Malaysia, they have gone over budget in Malta. “We are new at this, and our ears are open. We are just trying to figure it out as we go,” says Eric.

I want to be useful, to do something with my time.

One of their tips to keep the overall annual budget in check is to go to a country where the cost of living is cheap after being somewhere more expensive. “We’ve got to balance it out. After Malta, our next plan is to go to Vietnam, a very inexpensive country,” says Eric.

Eric and Larisa love delving into the culture; it’s one of the reasons they’ve chosen slow traveling. A fantastic way to do that is to volunteer. “As a retiree, I need some sort of meaningful work. I want to be useful, to do something with my time, not just sit around all day,” says Eric. The couple plans to volunteer in Vietnam with a family that will give them room and board in exchange for English lessons. Living with the family will provide them with the ultimate in cultural immersion.

Will they ever settle down? Possibly. It all depends on if they can find a location they both love that is close enough to Larisa’s family in Russia and Eric’s in California. “We will eventually explore all the countries that are close to both the U.S. and Russia, to see if anything fits. But until then, if we keep checking out the low-cost countries, we can invite our families to join us on the journey,” says Larisa.

Eric points out that for roving retirees, it’s okay to learn as you go. You don’t need to have all the money, or have it all figured out, before you take the first step. “The first move is always the hardest, but the second, third, fourth…those are easy. So, get out there, try it out. See if it is for you,” Eric says. “We land somewhere new and just look around and figure it out. We don’t have all the answers yet. But that is not going to stop us.”

How to Volunteer Without it Costing a Fortune

These days volunteering can be an expensive endeavor. There are a range of companies that will allow you to volunteer as long as you pay your way, which can be cost prohibitive for many people. But HelpX, Workaway, and HelpStay are websites with very low costs, if any, and connect volunteers directly with hosts.

The hosts/stays are located all over the world, including the U.S. These sites aren’t just for teaching English. You could actually learn another language while volunteering. You can work with animals, build homes, help at a farm, or assist in community development.

You can find all sorts of volunteer projects: looking after a rare breed of horses on a Greek island, helping on an organic farm in the countryside of Thailand, assisting on a game reserve in Botswana. The options are limitless and range from a few days to a few months. Sometimes you’ll stay with a family, other times a community dorm for an NGO. It all depends on what you are looking for; with thousands of options, you’ll find the right fit.

Part-time work is available as well, and many of the hosts are flexible with their work hours. It’s a great way to see the world and give back at the same time. If you really want to stay somewhere where the cost of living is high, why not volunteer? You still get to see the surrounding area on your days off or after work.

Like anything else, be sure to read all the fine details of each stay. Some only provide one meal, or provide you with a kitchen to cook your own meals. There are even a few paid spots as well.