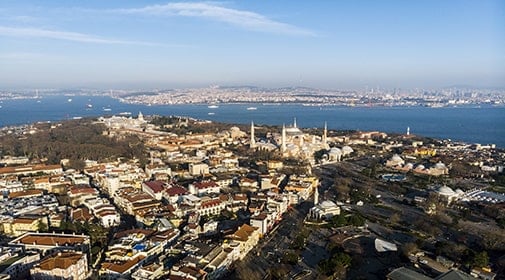 One side is Europe, the other is Asia. East meets West in Istanbul, Turkey. ©iStock.com/ozgurdonmaz

Sometimes when you’re in the midst of an economic crisis, you can feel it. People are visibly anxious. Restaurants are quiet. Stores can’t keep the basics in stock. There’s an eerie quiet at construction sites.

I’ve seen all this before. But I didn’t see that when I recently visited Turkey. Things seemed strangely normal. Markets have stabilized since then, but it isn’t over. I think Turkey’s problems are going to last a long time.

As one banker told me, “This market will always be an emerging market.”

Turkey is the size of the U.S. state of Texas. With a population of 82 million, it has around three times as many people as Texas— although its GDP is about half that of Texas.

The country is at the crossroads of Asia and Europe. I know that sounds like a tourist slogan. But when you wander around Istanbul, the country’s business capital, you really feel it.

When I visited Istanbul in September 2018, I stayed in the historic center, a stone’s throw (literally) away from the extraordinary Hagia Sophia. Built in the year 537, the Hagia Sophia was the Greek Orthodox Christian patriarchal cathedral. Later it became an Ottoman imperial mosque. That intersection of cultures and centuries is the epitome of Istanbul.

Today, Turkey’s strategic location between the east and west, its status as a NATO member and ally of the U.S., and its symbolic significance in the Muslim world, makes it an important force in global affairs.

Turkey, the center of the Ottoman Empire, controlled much of southeast Europe, Western Asia, and North Africa between the 14th and 20th centuries.

The modern Turkish state was founded in 1923 by Mustafa Kemal, known as Ataturk. He was a general who salvaged what remained of the Ottoman Empire in the aftermath of World War I. Ataturk believed that the centrality of Islam to the Ottoman empire was largely responsible for the empire’s demise.

So his redefinition of Turkey focused on nationalism and Turkish history and ethnicity, rather than religion. And the persecution of minorities—including his Young Turks movement’s role in the Armenian genocide and persecution of other minorities such as Greeks and Kurds—remained a centerpiece of government policy.

After Ataturk’s death in 1938, successive governments and leaders followed his secularist (that is, non-religious) ideology and policies. Turkey was growing and modernizing. For years it was knocking on the door of the European Union, with the long-term goal of joining the EU.

In 2003, a new political force swept to power, when Recep Tayyip Erdogan, of the Justice and Development Party (AKP), was named prime minister.

Erdogan’s election marked a departure from the secular tone that had characterized Turkey’s politics for decades. Erdogan, who became president in 2014, gradually expanded his power at the expense of democratic principles. In 2018, he pushed through an amendment to the constitution that changed Turkey from a parliamentary republic into a presidential one, abolishing the role of prime minister. He also forced through a measure enabling him to directly appoint judges.

Turkey isn’t a dictatorship. But it sure looks and smells and sounds like one.

Throughout Erdogan’s reign, the Turkish economy has been growing fast. Inflation-adjusted GDP growth has averaged 6% per year since 2003. What helped the economy grow were massive (and not always necessary) infrastructure projects.

But meanwhile, inflation has averaged around 10% over the same period. That’s extremely high—and it’s rising.

In most economies, the central bank increases interest rates to keep inflation down. For example, the Federal Reserve, the U.S. central bank, has an inflation target of 2%.

Erdogan, though, doesn’t believe in interest rates. He’s repeatedly said that high-interest rates create (rather than reduce) inflation. To anyone with only a passing understanding of macroeconomics, this is like insisting the moon is made of blue cheese.

Luckily for Erdogan, over the past 10 years, central banks around the world have been pumping cash into the global economy to drive growth. Until recently, interest rates in the U.S., Japan, and Europe were exceptionally low—for an exceptionally long time.

That’s allowed Turkish companies— and banks in particular—to attract low-cost capital from investors around the world searching for yield. If you can make only 0.2% in U.S. Treasuries…then 6% or 8% from a Turkish bank sounds good.

And in turn, those banks lent that money to people in Turkey, who used it to buy apartments and cars and vacations. Turkish companies used it to expand and invest… and to buy overpriced real estate.

Borrowing cheap capital from abroad (in foreign currency) and lending it domestically (in local currency) has been a recipe for economic growth in emerging markets for decades. It works well…until interest rates in developed markets start to rise.

But that’s only part of the picture. While foreign money was cheap, Turkey’s government was spending more than it was earning in revenue (that’s called a fiscal deficit). And the country has also been running a current account deficit, which means that it’s been buying more stuff from abroad than it’s been selling to foreigners. As interest rates rise, it becomes more difficult for borrowers—individuals and companies—to pay back loans… because those loans now cost more, with higher interest rates.

Part of the problem is that Turkey doesn’t have much oil or gas. So it has to constantly buy energy from abroad. That means that it has to sell lira—and buy (say) roubles, if it’s buying from Russia. That puts more pressure on the Turkish currency… and fuels the deficit.

An economy can support a “twin deficit” for a while. But Turkey’s has become too big to be supported by the size of the country’s foreign currency reserves.

When I was in Turkey in early September 2018, it felt like the calm before the storm. Everything seemed normal. Shopping malls were full, unemployment was low, salaries were being paid in full.

Things felt normal in part because the media in Turkey is tightly controlled. If the newspapers aren’t talking about the depreciation of the currency, things can feel kind of normal, at least for a while.

But that sense of normality won’t last long. It takes a while for people to realize that their hard-earned lira-denominated salaries are worth a lot less, in real terms.

And Erdogan still doesn’t get it. Like a true autocrat, he’s insisted that Turkey’s economic crisis is the result of a foreign plot. He talks about an “economic war” and points to external forces as the real culprits of the country’s problems.

Turkey’s is one of the world’s cheapest markets.

The Turkish government has been pressuring companies to reduce the price of goods, in a backward attempt to ward off escalating inflation. The government also recently announced tax cuts and new subsidies on fuel and other key resources. These measures will push up the current account deficit and the fiscal deficit.

And measures the government is implementing to make debt restructuring easier may stave off bankruptcy for some companies. But like anything with Erdogan, the process will become politicized— with some favored companies and banks kept alive for way too long.

Erdogan is intent on ignoring economics… and on tightening his grip on power.

One of the key characteristics of emerging markets is that individuals, rather than institutions, are what’s most important to a government and an economy. In developed markets, the rule of law makes sure that things keep working regardless of who is in power. The different organs of government balance each other out. A mostly independent judiciary makes sure that people stick to the rules. Politicians may fight each other and policies might change, but the underlying foundations are strong.

Turkey’s foundations weren’t all that strong in the first place. And Erdogan has been busy tearing them down.

Why I’m Not Investing in Turkey Today

Turkey’s stock market has recently recovered from 10-year lows. But the biggest New York-listed ETF (ticker: TUR) is still down more than 50% from 2015 highs. Turkey’s stock market trades at a CAPE (or Cyclically Adjusted Price to Earnings ratio, which measures stock prices over a 10-year period, adjusted for inflation) of 9.4. That’s low enough to make it one of the world’s cheapest markets. By comparison, the S&P 500 is at a CAPE of 30.2. Singapore is at 13.4…and Hong Kong is at 16.6.

Ordinarily, this is the sort of situation that gets me really excited. It’s a market where the headlines are awful…asset prices are down a lot…and the market is cheap.

But right now, Turkey is different. The institutional framework that is an essential prerequisite for investment is crumbling. The president can do whatever he wants— and he’s going to continue to do whatever he wants. That kind of unpredictability and uncertainty is investor kryptonite.

Don’t get me wrong. All emerging markets have some problems with the rule of law—that’s why they’re “emerging.” But if an asset is very cheap, it might be worth buying, even if the investment environment is lousy. There are lots of very cheap stocks in Turkey right now. But most of them will stay cheap for a long time— and may well get cheaper.

You see, the problem with Turkey now—and for a while yet—is that there’s no sign that things are going to improve. And as long as Erdogan is the leader of Turkey, it’s clear that the investment environment is going to get worse.

So I’ll be keeping a close eye on Turkey, in case there’s a stock that’s just way too cheap, even for Turkey. But for now, I’m not adding any Turkish stocks to my list of picks for 2019.

Editor’s Note: Kim Iskyan is the publisher of Stansberry Pacific Research and has lived and worked in 10 countries, including Russia, Sri Lanka, and the United States. Along the way, he’s learned something about how markets work…and what matters (and doesn’t matter) in the world of investing.

Stansberry Pacific Research is an independent investment research company based in Singapore that delivers investment insight on Asia and around the world. This essay was first presented to readers of Kim’s premium global investment service, International Capitalist. See: Stansberrypacific.com for more details.