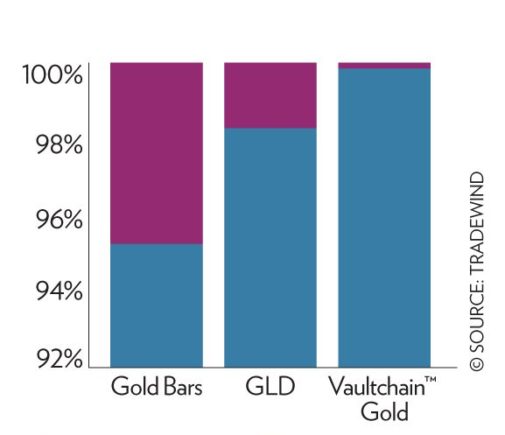 VaultChain Disrupts How We Trade Gold

Buying gold has finally caught up with the 21st century. With previous options, investors had two choices. The first is to hold the physical metal—and pay high fees. If you don’t own your own personal safe, the cost to carry can range from 0.3% to 1%, annually. As illustrated by the estimates on the chart, fees erode gold’s value.

The next alternative, which first appeared in the early 2000s, is the exchange-traded funds (ETFs) and trusts that hold precious metals. The first ETF on the scene was SPDR Gold Shares (NYSE: GLD). The annual expense is between 0.2% and 0.6%, after a nominal broker fee.

While cheaper than holding physical gold, most of these options are not redeemable for the physical metal.

A new, third way, is through the recently launched VaultChain platform.

VaultChain harnesses the power of blockchain technology for efficient and secure trading. The platform is backed by the Royal Canadian Mint (RCM). With billions of dollars’ worth of gold stored at its facilities, the RCM is a stable and secure depository.

Now, producers, refiners, and dealers trade on VaultChain. With it, the everyday retail investor is trading gold on the same platform as giants like Goldcorp and Agnico Eagle Mines. What separates VaultChain from other alternatives is that the ownership records are kept on a blockchain.

This is the same technology that drove the cryptocurrency craze, thanks to its security and anonymity.

Blockchain allows investors to move their gold through any number of dealers on the platform. They can even go to the RCM to redeem their gold.

Expenses for trading and storing gold are modest. There is a 1% transaction fee, and the annual carrying fee is 0.12%.

Chinese Stocks Are Down: Time to Buy

There are two basic principles that all stock investors should follow in China: Stick with the big stuff and stay highly diversified. It’s simply too risky to go too far into the weeds of the small cap or mid cap worlds. And Chinese capitalism is so wild that diversification is paramount. Investors can capture the economic growth, but they’re best to do it with a broad basket of stocks.

The easiest way to get such access is via the MSCI China Index. This mainly consists of Chinese stocks traded in Hong Kong or non-Chinese markets, and denominated in Hong Kong dollars or (mainly) U.S. dollars.

Investors who bought the index in December 2005 have made 9.8% a year since then, with compounding, and despite the recent falls. That said, the overall uptrend has clearly been punctuated by booms and busts.

Of course, there are things to be concerned about in the short term. Around 19% of Chinese exports went to the U.S. in 2017. If the U.S. decides to keep/ increase/extend stiff import tariffs on Chinese goods then many Chinese companies will take a hit. On the other hand, the trade tensions may disappear within weeks.

On balance, the MSCI China index looks attractively priced at this level, at least for the long-term. But investors should bear in mind the high concentration in quite richly priced ecommerce stocks (Tencent, Alibaba) combined with cheap bank stocks, but with exposure to corporate lending.

For those interested in investing in Chinese stocks, after last year’s falls, an easy route in is via the iShares MSCI China ETF (Nasdaq:MCHI).

A robust portfolio should be diverse. It’s about reducing swings to a bearable range. I recommend spreading investments between stocks (40%), cash (35%), gold (15%), and long-dated U.S. treasury bonds (10%).

Stocks are for profit, if bought at the right price and held patiently. Cash is there to scoop up future bargains when those are available. Gold is both crisis insurance and a long-term bet on growing global prosperity (expanding Chinese and Indian jewelery demand meeting slowing growth of gold supply). Treasuries are mainly a hedge against stock market mayhem.

Tourism is on a tear in Colombia. In 2017 visitor numbers increased 24% from the year before. From January to May 2018, the increase was 38.1%. At least 20 new international airline routes have opened in the last two years.

The city of Medellín is among the most popular spots. From January to August 2018, it saw an increase of 23% in international visitors. And just two hours away from Medellín is one of Colombia’s most popular and beautiful destinations, the lake town of Guatapé. Five years ago, tourism around the lake was just domestic. Now, my insiders tell me every foreigner who comes to Medellín seems to spend time at Guatapé.

Guatapé is an hour from Medellín’s international airport at a slightly higher elevation than Medellín. The climate is perfect, and the lake views are appealing.

You’re not out in the boonies; you can eat Thai or Indian and meet people from all over the world.

The lake is overlooked by the famed rock of Peñol. Rising over 700 feet, it’s a magnet for visitors who climb it for the view. My insiders tell me that foreign-owned real estate agencies are popping up. Foreigners are beginning to buy, and homes are cheap.

I heard of one old three-bedroom home with lake views going for $90,000 at the very foot of Peñol. That’s the kind of news that makes me sit up and consider a trip.

The more tourists come to Colombia, the more destinations like Guatapé will grow and land with lake views in the right location will become scarce. Get ahead of it and it could pay.

Wall Street is Coming for Cryptocurrencies 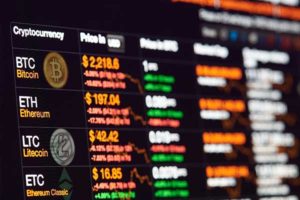 Just about every big bank on Wall Street is working on a way to enter the cryptocurrency space. The most visible of these is the upcoming bitcoin exchange, Bakkt.

Created by the team that operates the New York Stock Exchange (NYSE)– Intercontinental Exchange (ICE), it could launch as early as this month. It’s exactly what the cryptocurrency space needs.

Finally, Wall Street money managers will have a place to buy and store bitcoin that’s as trusted and secure as the NYSE.

As soon as it launches, massive amounts of money could start flowing through it. For a lot of institutional (or big-money) investors, this will be the first time they can safely and easily buy bitcoin.

And Bakkt is only the beginning.

In short, trillions of dollars are headed for the crypto space. This will push prices up rapidly.

Because bitcoin has a fixed supply, there will only ever be 21 million mined. The exact number of bitcoins in circulation is difficult to determine because most cryptocurrencies are designed to continuously issue new tokens or coins on a routine basis, but, right now, there are over 17 million bitcoins in existence. Very soon, crypto will see a flood of new investors, and there won’t be enough bitcoin to go around.

So if you haven’t invested yet, now is the time.

China’s economy makes up 18% of the global economy. And it’s growing at its slowest pace in 28 years.

Yet China is bringing in crude oil at breakneck speed. The country is now importing 10.48 million barrels per day.

That’s almost as much as Saudi Arabia’s record rate of production—10.72 million barrels per day.

And Chinese crude oil refiners processed more oil in 2018 than ever before. Analysts expect them to outdo that performance this year. Don’t get me wrong: China and emerging markets are not going to set any growth records this year. But they don’t have to.

Current growth rates will be enough to support these economies and their demand for crude oil.

These economies can grow below recent averages and still attract investors. And low oil prices help. Eventually, the herd will realize why emerging markets and China will drive crude oil prices higher. Look to the Energy Select Sectors SPDR ETF (NYSE: XLE) to expose your portfolio to shares of major oil producers.