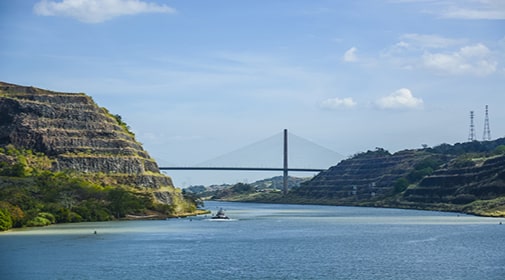 From mighty container ships down to the smallest yacht, the Panama Canal fits all. ©iStock.com/Lovely_Images

As grand feats of engineering go, few projects can compete with the ambition and grandeur of the Panama Canal. The 51-mile-long navigation artery sees around 18,000 vessels—from gargantuan container ships and cruise liners right down to single-berth sailboats—threading the needle between the Atlantic and Pacific Oceans every year. And the scenery along the way, both built and natural, is nothing short of spectacular.

My 13-year-old daughter and 11-year old son both studied the canal in school. So they were more than impressed when we visited the Miraflores Visitor Center just outside Panama City to watch the operation of the locks. These huge gated pools are filled and emptied of water, to lift and lower boats to and from the elevations of the canal’s main section. To experience the transit close up and hands-on, we volunteered to join the crew on a private catamaran.

The Canal Authority requires any transiting vessel to have four physically capable persons on board to act as line handlers—one for each corner of the boat. The responsibility of a line handler is to secure the boat to the mooring line. This is to prevent the boat from moving freely as the locks fill and empty. Because many private vessels passing through the canal don’t have the required number of people aboard, the demand for casual line handlers is high. Despite our family’s lack of sailing experience, we learned that many private yachts transiting the canal take on volunteer line handlers rather than pay a professional.

Because we were in Panama and were flexible with our time, we decided to visit the Balboa Yacht Club and the Shelter Bay Marina. Most private boats waiting to transit will dock there, and the yacht club is a good place to find out if additional hands are needed. If you are not already in Panama but plan to visit, you can register as a volunteer line handler and post your dates of availability on: Panlinehandler.com.

After a day of walking the pier at Shelter Bay, we agreed to join Captain Sandro and his family on their 38-foot catamaran, Nautili, which they had sailed across the Atlantic from Portugal. Because the total transit of the canal takes approximately 24 hours, over two days, we packed an overnight bag and made sure to bring hats, sunglasses, sunscreen, food, and plenty of drinking water.

What a great experience it was! Captain Sandro easily taught us the knots we would need to know. And he let us each take the wheel of the boat as we motored toward the first engineering marvel of many—the Gatun Locks—along with a huge container ship and four other private yachts.

Once Nautili was positioned within the lock, my wife, Rebecca, and I got in position to receive lines thrown down to us from either side of the lock chamber. Captain Sandro’s wife and niece manned the other corners, while he kept things steady at the helm. Our kids ran here and there, careful to avoid interfering with the work, snapping pictures to add to their photo albums.

Once we secured the throw line to the mooring line with the knot we had learned, it was hauled back up by the line throwers. With the ropes secured, they walked us through the canal like a dog on a leash. As the locks began to fill, with the water seemingly boiling beneath us, Rebecca and I prepared to take up any slack in the lines. This was the biggest challenge, as our smaller vessel was buffeted by the rising water, as well as by the churn from the engines of the large ship in front of us.

After completing this first leg of our journey, we were only one mile from the Atlantic Ocean where we had started, but we were now at an elevation that was 85 feet higher. A small step, horizontally, but a giant leap in vertical terms. We celebrated our progress with dinner and a cold drink, and spent a restful night anchored among the swaying palms, mangrove wildlife, and the flotilla of ships and boats moored on Gatun Lake.

Day two began early and consisted of a long motor toward the Pacific. There wasn’t much to do except admire the passing ships, enjoy the sights and sounds of the jungle that grew right to the banks of the Canal, and stay out of the sun as we cruised the 40 or so miles to our second and final set of locks at Miraflores. This time, we had to drop altitude, to end up back at sea level after crossing the elevations of inland Panama.

It was quite a thrill when the twin doors of the final lock chamber opened and revealed the soaring Bridge of the Americas— which connects the North and South American land masses—and the vast expanse of the Pacific Ocean beyond. I imagine Vasco Núñez de Balboa had a similar feeling in 1513, when he scaled the mountain summit to become the first European to lay eyes on the eastern Pacific from the New World, and the dream of a waterway passage was born.