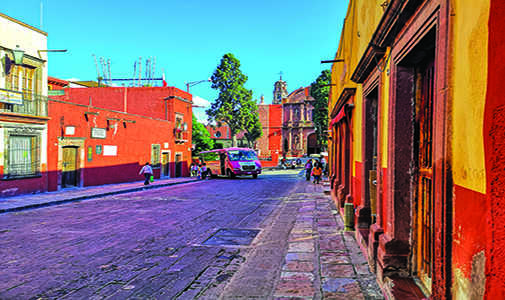 I met Dwight Holden at a Zumba class, in San Miguel de Allende’s Parque Juarez. Few men attend, and Dwight’s Zumba style is notably energetic. We were dancing next to one another, so chatted after class.

Dwight and his partner, Ted (both 71), were splitting their time between New Zealand and San Miguel. I’d never met an American who’d managed to obtain residency in New Zealand, but since Dwight is a geriatric physician and Ted’s a veterinarian, their skills were in high demand. They lived and worked in New Zealand for four years, then stayed another two years part-time, and traveled in Australia and Asia.

New Zealand is an expensive place to live permanently. So, they returned to the U.S. and bought a home in Santa Fe, New Mexico. For a few years they split their time between New Zealand and Santa Fe, while continuing their worldwide travels.

On a vacation in Europe, Dwight realized that he had a new ambition. “I set a life goal—to become bilingual.” After the trip he signed up for a class at the Warren Hardy Spanish School in San Miguel. When Dwight arrived in town for the class, it was his first visit to San Miguel.

“We arrived the day of a huge festival for the town’s patron saint,” he says. “I shot hundreds of photos and was completely stunned by the richness, color, and diversity of the parade and the commitment to history and tradition. I was transfixed and ready to move here that moment.”

From 2017 to 2019, Dwight and Ted spent several months a year in San Miguel. “We realized that we love the richness and depth of the Mexican culture. The friendliness; the long history of Mexico; its commitment to family and tradition, they all resonate with us,” says Dwight. “And the cost of living is more sustainable than it was in New Zealand, or in Santa Fe.”

In 2019, Dwight and Ted decided to move permanently, and bought a comfortable home near Parque Juarez. “We love living in the central part of town,” Dwight says. He’s delighted they no longer need a car. “We live a healthy pedestrian lifestyle. We feel extremely safe walking everywhere. Restaurants and shops are just down the street from our home. There’s always a crowd; young families, and older people visiting and passing time on the benches, and listening to mariachi bands,” he says. “For us, it’s magical.”

In the fall of 2020 Dwight and Ted undertook an eight-month remodel of their new home. “We did a major renovation of the kitchen and added a new roof terrace to enhance our views,” says Dwight. He and Ted were gratified that the remodel cost a fraction of what it would have in the U.S., yet the quality was exceptional. “We’ve treasured our architect/ contractor,” he says. “I can’t say how much I admire the workers. They work extremely hard, are very creative, and never complain. They talk, laugh, and play Mexican music while working…”

Dwight and Ted have found their San Miguel lifestyle to be affordable. “The cost of living is stunningly better here than in the U.S.,” says Dwight. “It’s probably 35%-40% cheaper here. And our needs are fewer here, especially since we don’t need a car. Taxis are $2.50 to $3 anywhere in the city, when it’s too far to walk. The climate is nearly perfect, so utilities are a fraction. Taxes are a fraction. We’ve guessed that our remodel is about a third of what it would have cost in the U.S. We have full-time housekeeping/ gardening help and have become very spoiled.”

Both men are now retired. Dwight continued working part-time as a physician in the U.S., remotely, until 2020. “It worked out well,” he says. “San Miguel is a great place where those fortunate enough to have telecommuting jobs can work online.”

These days Dwight and Ted focus on their vocations. “For me, as a photographer, San Miguel is a paradise, with the beautiful patina of the city and its fascinating people,” Dwight says. He has immersed himself in online photography courses, and self-paced learning. “I spend hours with it daily.”

Ted has been equally happy. He takes online culinary courses and loves their new kitchen. “We also hired a personal trainer (it’s affordable here) to train us on our patio. We are always busy.”

Living overseas, you meet some expats, like Ted and Dwight, who have lived in multiple countries. They’ve learned that the first country you move to doesn’t need to be your forever home. Dwight and Ted have no regrets about the wonderful years they spent in New Zealand, but San Miguel is currently their perfect spot. “We feel grateful and fulfilled here,” says Dwight. I look forward to seeing him again at Zumba.