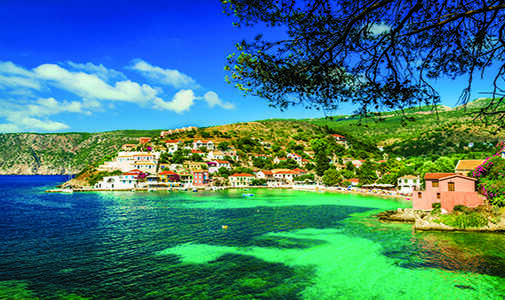 Purchasing a three-bedroom house on Corfu could qualify you for Greece’s Golden Visa. ©Lucianboica/iStock

At some point in the lives of all global travelers, there comes a moment. Maybe it’s the light, or that carefree sense of joie de vie that invades the soul when you’re temporarily disconnected from your daily grind. Maybe it’s something else entirely. Regardless, a point comes when you stop, take in the view in front of you, and you think: Damn—I could live here!

I’ve had many of those moments, honestly. On a secluded beach in Uruguay. On a seaside cliff in Northern Ireland. Inside El Xampanyet tapas bar in Barcelona. And—this one is relevant to the rest of this story—on a much-too-narrow, one-lane road in the hills just south of Heraklion, on the Greek island of Crete.

It was like being in the Greek version of Under the Tuscan Sun—vine and olive groves, sea views in the distance, picturesque hills, rustic stone houses, the warming sun in the brilliant Greek-blue sky. It was all washed over with an overall sense of welcoming serenity.

Why do so many expats want to live in Greece? Well, when you spend time in this country, it’s not hard to understand the attraction. It’s a compelling blend of the ambiance, the scenery, the food, the wine, and the people.

I particularly enjoy the daily life that seems to flip the middle finger at the western world’s go-go-go-‘til-you-win-the-rat-race-and-die culture.

I’ve written before about seeking visas to live in Greece, but those stories were primarily focused on how to obtain freelance-work visas or the country’s new retirement-focused visa. But there’s another way to gain access to a Greek lifestyle, and quick permanent residency to go with it: The Greek Golden Visa program.

One of the most beautiful corners of Europe.

As with similar golden visa programs around the world, you are buying residency. You turn over a significant chunk of money. In return you gain a list of benefits that, in the case of Greece, are indeed rewarding. In this case, the benefits include visa-free travel throughout Europe’s Schengen Area (26 countries in Western Europe), and the ability to obtain Greek citizenship and a Greek passport in seven years. And don’t forget, you’re not simply giving the Greek authorities your money, you’re spending it on real estate. For you. Choose carefully and you can end up with your dream home.

What’s most compelling about the Greek Golden Visa is its cost. At $250,000, it’s the most affordable Golden Visa option in all of Europe (Greece is tied with Malta). That makes Greece the most popular destination among global expats seeking the quickest path to permanent residency with a European address.

Eligibility for one of Greece’s Golden Visas is fairly simple. You must:
• Be a non-European Union citizen.
• Be over the age of 18.
• Have a clean criminal record.
• Have medical insurance for you and your family that covers you in Greece.
• Be of good character. (This undefined clause is something you’ll find on almost all visa applications for long-term stay or residency. An FBI report usually suffices.)

To be clear, this is explicitly about property investing. If you just want to deposit a bunch of money, then the sum jumps to $400,000.

But what does a quarter-million dollars buy in Greece? Well, that totally depends on where you go. Population in Greece is widely spread out across the mainland and more than 200 islands, some of which are so sparsely populated you can’t find banking services or shopping beyond the local market and a few small bodegas.

In a central Athens neighborhood, $250,000 will buy you a 750-square-foot, new-build, ultra-modern, two-bedroom apartment. In Thessaloniki, you’re looking at a newly renovated four-bedroom apartment spread across more than 2,000 square feet in the heart of the city. On the Ionian island of Corfu, you can find an 1,800-square-foot, three-bedroom, detached house right near the sea and beach just three miles from the main commercial hub of Corfu Town.

The benefits of a Greek Golden Visa are numerous.

1. Permanent residency.
You are obtaining a permanent-residence visa from the outset, rather than temporary residence, which is common among many other Golden Visa countries. The process will take 30 to 60 days, but once it’s complete, you’re a full-on Greek resident.

2. The right to live in Greece…or not.
As a permanent resident, there is no limitation to how long you can stay in Greece. Conversely, there is no minimum amount of time you must stay in the country. That’s neat; many other Golden Visa options require you to remain in-country a certain amount of time every year to remain eligible for the visa.

4. Residence is applicable to the whole family, including children under 21 years old, and parents of the main applicant and spouse.
This is fairly common among Golden Visa options, though some countries do charge add-on fees for additional family members.

5. Access to the Greek healthcare and education systems.
For parents with university-age children, Greek permanent residency means kids can attend Greek universities for free. As for healthcare, the system is quite good, ranking 14th in the world in a 2021 survey. (By comparison, the U.S. ranked 37th). Anecdotally, on a research trip to Greece in 2019, I talked to several retired American, British, and Aussie expats in Athens and on a few of the more=popular Greek isles. All of them were quite pleased with the healthcare they’d received for everything from heart issues to dermatology.

6. Eligibility to apply for Greek citizenship after seven years of residence.
This is, perhaps, the most important benefit to any expat who ultimately wants to find a new home—the possibility of obtaining a local passport.

The Greek passport is a European Union passport, which means that once you obtain it, you can live anywhere in the 27-member E.U. without ever again having to apply for residence permits or visas. You could move from Greece to Portugal, or Spain, or Italy, for instance, just as easily as moving from Florida to Montana.

Overall, a Greek passport is ranked #8 in the world, tied with Norway, Malta, and the Czech Republic. It offers visa-free travel to 186 countries. That’s only one less than the U.S., at 187 countries.

Overall, a Greek passport is ranked #8 in the world.

To apply for a Greek Golden Visa, you must start the process outside of Greece, at a Greek embassy or consulate. In the U.S., the main embassy is in D.C., with eight consulates across the country that handle applications from specific regions. (In Canada, the embassy is in Ottawa, with consulates in Vancouver, Toronto, and Montreal.)

After you’ve applied, you’ll need to visit Greece to house-hunt, or to island hop and house-hunt as you look for a place to call home. Given the eccentricities of Greek real estate, and the fact that not all Greek property meets local codes because of illegal or unpermitted additions and such, you will definitely want a pro to guide you through this part of the process.

Once you have your property and real estate documents, your visa application, and all the usual suspects (passport, passport photos, proof of health insurance, etc.) you’re going to submit your packet of info to the Alien and Immigration Department in whatever region of Greece you’ve chosen to live. (There are more documents required than I’ve spelled out; those are just examples of what you need.)

Again, the documents and filing procedures are where you’ll probably want to have a local pro help you. The process will, quite literally, all be Greek to you. Though English is pretty common across Greece, you’re not likely to find a great deal of it spoken in the mid- and low-level bureaucrat ranks. A legal or immigration professional who specializes in Golden Visa requirements will make that application process markedly easier, since they’ll handle all the heavy lifting when it comes to paperwork.

At that point, you’re going back to Greece to submit all your biometric data for your residence visa.

And with that, you’re a permanent resident of one of the most beautiful corners of Europe.

Of course, Greece isn’t all sunshine and bougainvillea. No country is.

And though Greece overall is super-affordable compared to much of the U.S., costs can be quite pricey in resorts. Certain areas—parts of Athens, Mykonos, and Santorini, for instance—are highly touristed and prices can be noticeably higher for everything from apartments to food.

You put up with the hassles because the Greek Golden Visa is one the very best and most affordable opportunities for obtaining quick, permanent residency in Europe. It’s also a relatively fast-track path to citizenship and one of the strongest passports in the world.

Jeff D. Opdyke is the editor of the Global Intelligence Letter, IL’s guide to a richer, more rewarding life. Based in Prague, he spent 17 years at the Wall Street Journal and writes on personal finance and investment. Check out his free e-letter, Field Notes at IntLiving.com/FieldNotes