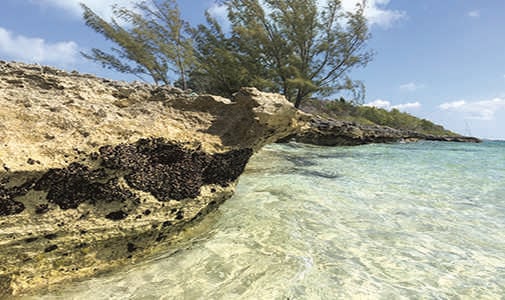 The many heavenly islands of the Bahamas are the very picture of a Caribbean hideaway. ©Matt Claiborne/iStock

I’d all but forgotten the feeling of goosebumps on my skin since moving to Eleuthera, Bahamas. It was hard to believe that just a few months earlier, I was living in New England, where even on the warmest days the ocean is reliably frigid.

I blearily climbed onto Mary Alice, a panga boat, dive fins clamped under my arm. The air was damp and heavy, and I could already feel heat radiating off the surface of the Caribbean, even though the sun would not climb over the horizon for another 20 minutes.

Mary Alice rumbled to life and I took a seat near the bow across from Maya, another American expat. As we picked up speed, the pungent smell of conch mixed with outboard motor oil was replaced by salt spray. We rounded the pole which marks the tip of the 107-mile-long island of Eleuthera.

Eleuthera is funny—it takes almost a day to drive from one end to the other, though seeing as the island is barely two miles wide in most places, you’re never more than a mile away from the sea.

The narrowest part of the island is at Glass Window Bridge. Standing on this bridge, the tranquil turquoise waters of the Caribbean lap lazily against a gently sloping, sandy shore on the western side. On the eastern shore, the rich, deep blue of the Atlantic relentlessly batters the limestone coast, furiously carving magnificent, sheer cliffs.

When I first visited the place where two oceans meet, I was with an Irish expat. Tears threatened to spill down her cheeks as she laid eyes upon the cliffs, “I didn’t think it would look so much like home.”

Mary Alice sliced through the water, rounding the southern tip of the island. Maya stared stoically out at the horizon, her hair tying itself in knots as it blew in the wind. Chris, a retired Navy Seal who now lives in The Bahamas sat next to me, his pale eyes alive with anticipation.

We sped toward one of the shallow patch reefs that litter the sandy sea floor before the bottom of the ocean drops away and you enter the Exuma Sound, a trench which is over 3,000 feet deep and just a mile or so off the coast. Spots like these are perfect for learning to freedive (sub-aqua diving, but without air tanks). The shallow reefs typically have excellent visibility, and you don’t have to go any deeper than 10 feet before you reach the top of the coral structures.

The reef we visited that morning was called Cathedral. I slipped over the side of the boat into the sea, which was the same temperature as the air. I looked down at the towering coral, which in that moment seemed to me much deeper than it should be—at its shallowest, the structure is only 10 feet below the surface. At its lowest point, the site is about 30 feet deep. The last time we came here, I was too nervous to actually dive. I snorkeled around above the divers and took a few duck dives (essentially when you bob under the surface of the water maybe five or six feet down).

Chris dove first. As he descended, my chest tightened. It was like watching a movie where a character is stuck underwater holding their breath, only this time the person holding his breath wasn’t on a screen; he was real, and he was right below me. Fifty, fifty-one, fifty-two. I counted in my head until his face broke the surface of the water. “Breathe, one, two, breathe, breathe, breathe,” I said as he clasped my hand. He shot me a lopsided, wild smile, “Your turn, let’s see what you’ve got.”

I grinned nervously as I stuck my snorkel in my mouth. I was brand new to the sport of freediving. As soon as I put my face in the water, stress crept into my mind and made a home in my stomach. My tongue was heavy with salt and the distinct metallic taste of my own fear. I did a breathing exercise, then took the snorkel out of my mouth, steeled myself, and plunged in.

I faced my first problem almost immediately. When Chris dove down, he had drifted effortlessly toward the sandy sea floor. When I started to swim down, I could feel myself fighting my own buoyancy. Humans are naturally buoyant—in other words, we float. That’s why most scuba divers wear a weight belt to help them dive down away from the surface.

As I kicked, trying to dive down deeper, it felt like a giant invisible hand was grabbing me by the hips and dragging me back to the surface. I swam harder to overcome my buoyancy, and finally got a bit deeper (where the effects of natural buoyancy are less extreme than in the first few feet of the dive).

I tried to ignore the fact that Cam, another diver, had been steadily following the same fish—a large striped grunt—for nearly two minutes. Much to my chagrin, he tailed the fish along the sea floor, pumping his carbon fiber fins in long, controlled movements like brushstrokes on the elaborate underwater scenery.

The reef was eerie without the tinny, reliable hiss of a scuba regulator. Blood surged through my veins, thundering in my ears as it carried much-needed oxygen to my extremities. A fairy basslet, no bigger than my finger, hung motionless next to a purple sea fan, its fins swaying through the water like the skirt of a tiny yellow Flamenco dancer as it looked up at me. I wanted to sit patiently and take in all the details of the fish, but my body defied my wishes.

Only a few seconds passed before I could no longer ignore the panic searing my throat. I caved, and shot to the surface. I took full, deep breaths as Chris grasped my hand. After a few seconds, my heart rate slowed and my panic faded. “That was awesome!” Chris beamed.

“I think I can stay down for longer,” I said sheepishly, “I just got nervous.” Chris replied, “You know, most people can’t pressurize their ears without pinching their nose. But I just watched you do it! That’s incredible. I can’t even do that. But if you want to go for longer, it’ll help if you adjust your hips when you dive. Don’t tire yourself out so much at the beginning,” he patted me on the shoulder.

I rolled my eyes, “Chris, you sink like a rock because you have two metal hips that act like dive weights,” I joked.

When I dove the second time, I kept my shoulders, hips, and ankles in line as I drifted toward the bottom. Instead of looking where I was going, I kept my head in a neutral position on my shoulders and stared straight in front of me.

I released the pressure in my ears and came to rest gently on the sand next to the coral. There, I looked up and appreciated for the first time that Cathedral is very aptly named. The sun must have just risen; its rays pierced the water and danced on the coral, giving the impression of stained glass.

I sat motionless, drinking in every single detail with my eyes. The silence, which on my first attempt had seemed oppressive, was meditative. I drew my attention to the sand in front of me and, to my surprise, a tiny bright blue shrimp the size of my fingernail peeked timidly at me. I held my hand out experimentally, trying my best not to make any sudden movements. Then, incredibly, it drifted towards me and settled on my fingertip, where its legs started furiously scrubbing at my cuticles.

Another one came out of its hiding place, and soon I had three or four of them dancing around my fingertips. Delighted, I set them down gently and began to float around Cathedral, spiraling slowly and effortlessly toward the surface.

On the ride back to the boathouse, I gazed across the pastel landscape as it changed colors with the rising sun—from periwinkle to lilac to sea foam green streaked with pink—until the kaleidoscope finally settled on a bright turquoise ocean which met a pale blue sky. Not bad for a Wednesday morning before work.

HOW DO I LEARN TO FREEDIVE?

Freediving is an excellent activity for people of all ages. Gear needs are minimal—only a snorkel, dive mask, and fins. Shallow, protected reefs with excellent visibility (like those on Cape Eleuthera) are great places to learn. Always learn to freedive with a certified freediving instructor, as they will be able to talk you through different techniques, they’ll know the best spots, and most importantly, they’ll be there to keep you safe.

You can find instructors in your area online through Freediving Instructors International, or you can find recommendations at your local dive shop. Talk to locals to find all the best freediving in the area, and always dive with a buddy.

When practiced safely, freediving is an excellent zero-impact activity for both the mind and body. Freediving has been around for thousands of years, and has roots in many coastal cultures. It is an honor to engage with the underwater environment while practicing this ancient art. As always, respect the ocean and creatures you come across while diving.