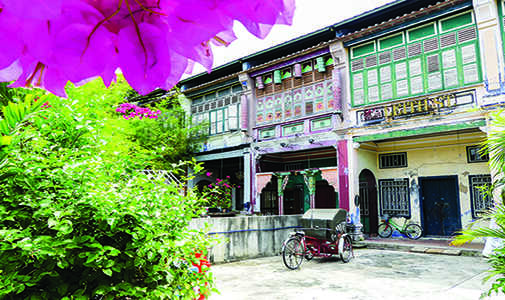 Have you ever wondered what it’s like to be an extra in a film or TV series?

Since moving to the island of Penang, Malaysia, I’ve been lucky enough to be an extra in a bunch of movies and TV shows. I’ve laughed primly in the background of historical dramas, and filmed take after take of eating runny eggs while shooting a commercial for Malaysia Airlines.

I wouldn’t have been able to do it in Chicago. I never had the time. But living in Penang, where loads of movies and series get filmed, the opportunities arise pretty regularly.

Most of the time, they need expats to fill out a scene. Since there aren’t that many of us here, we are a hot commodity. That makes getting work here much easier than if I lived in the U.S. For most of us expats, it’s a way to earn a little money (usually around $150 a day), meet new people, and participate in a behind-the-scenes experience.

How to find gigs

Word of mouth
Most gigs I’ve worked, I’ve discovered through word of mouth. A lot of the productions have had big scenes where they need at least 100 extras. On a small island, that news travels fast.

Once you meet other extras, start a contact group so that when one person hears about something, they can share it.

Agents
They usually post their needs in a press release in a local newspaper and all over social media. But one of their most reliable methods for finding extras is to reach out to people they’ve worked with before.

As an extra, you won’t have one agent dedicated to finding you jobs. So it’s best to put yourself out there to as many agents as possible. You need to be proactive if you want jobs; they won’t always come to you. Agents do take a cut of your pay, so ask them how much upfront.

Keep a record of the agents you contact because then you can reach out every once in a while. Stay in front of them. They work with hundreds of people; they will forget about you.

Since I’ve been working as an extra for the last five years, I’ve learned a lot of trade secrets. Some are more obvious than others, but they’ll all help you get into the swing of things more quickly.

Food
You might be working very long hours on set, and a crew will provide meals. If you have any allergies or are a vegetarian/ vegan, tell them as soon as you get hired. They should consider that and plan a special meal for you, but it doesn’t always happen. So bring food and snacks to subsist on, just in case.

You will not have a refrigerator, so don’t bring anything that could spoil. Cup o’ noodles, nuts, and meal replacement bars are the best.

Clothing and shoes
If the movie takes place in the current decade, they will probably ask you to bring clothing and shoes. When you are given clothes on set, you might have to share them with someone else, who may or may not be a prolific sweater. Better to bring your own, so the only person sweating in that dress is you.

As for shoes, there is nothing worse than standing in four-inch heels for 12 hours straight, multiple days in a row. Trust me on this. So whatever you do, bring your own and make sure they are comfortable.

Remember, you are an extra
Don’t try to get in front of the camera or stand out in a shot. You are there as background, to blend into the scene. You’re not an actor, so don’t try to be one.

Bring entertainment
There will be days when you are working non-stop, wishing for a break. And other days you’ll be sitting, wishing you were working. For those days, you’ll want something like a book, cards, or anything to entertain you besides a phone. Some companies have strict rules and make you hand in your phone on set.

Don’t talk to the actors
Leave the actors be—not because you are just an extra, but because a lot of the time, they are going over their lines or working through a scene, and you approaching them might throw them off their game. If they come and talk to you, that is different. I am not saying to ignore them, just give them the space to work.