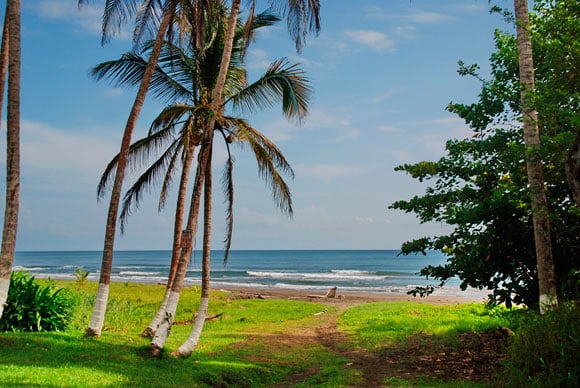 December is an ideal time to go snorkeling in the waters of Cahuita National Park. ©iStock.com/juliehewitt

Costa Rica is great any time of year. After all, there’s a reason it sees 2.6 million people visit annually.  But possibly the best time to explore Costa Rica is a secret season—the first two weeks of December.

After the big travel week of Thanksgiving at the end of November, hotel occupancy drops off sharply in Costa Rica until about December 15, when peak holiday season kicks off. This means you can get deals on a last-minute vacation.

Now, most hotels and tours are publishing their high season rates already. But they are willing to extend their low season offers to get business. Most hotels will give you low-season special promotions of up to 40% and 50% off. Many tours also give reduced rates.

You just need to ask, because you won’t find any mention of discounts in the advertising or information on their websites.

September to early December is the country’s peak “rainy season” but here’s the kicker: I have lived in Costa Rica for 17 years and the weather gets a bad rap in rainy season. Personally, it’s my favorite time of year. The rain brings cooler temperatures in the mid-60s F and low-70s F during the day in the Central Valley, and mid-70s F to low-80s F on the coast. That’s a stark contrast to the middle of the dry season in March when it can reach the high-80s F in the Central Valley during the day, and mid- to high-90s F along the coast. Rarely does it rain the entire day—there is almost always sun in the morning or the afternoon. Many days it doesn’t rain at all.

This time of year you also avoid the crowds. You can pretty much have the beaches and rainforest to yourself. Surfing in Costa Rica is always awesome. But there are far fewer people going for the same waves. And canopy zip line tours are more mysterious and gripping as you fly through the trees in the mist after a rain shower.

Even all the way up to early December, the weather is glorious on Costa Rica’s Caribbean Coast. That’s not to say you won’t get a rain shower or two here and there, especially later in the year. But it’s still a perfect time to visit my favorite beaches of Cahuita, Puerto Viejo, and Manzanillo. Each has its own character and flavor: Cahuita is quieter and less touristy than Puerto Viejo and is home to the Cahuita National Park, which has the largest coral reef on Costa Rica’s Caribbean Coast. Puerto Viejo is where you find all of the cool restaurants, beachside shops, and a big choice in hotels and vacation rentals. And Manzanillo is a sleepy little village at the end of the road along the coast, where you find the Gandoca-Manzanillo Wildlife Refuge.

This time of year when the Caribbean Sea is calm, it is ideal to go snorkeling or scuba diving in the clear waters of the Cahuita National Park. It is also a good time for a boat tour to see wild dolphins or to go sea kayaking. And you can’t miss hiking in the Gandoca-Manzanillo Wildlife Refuge, which is home to monkeys, sloths, and a huge variety of birds.

There are plenty of places to stay between Cahuita and Manzanillo. Vacation rentals are also an up-and-coming option for where to stay. You can stay in Cahuita at Costa Azul Lodge for only $40 a night in a double room; or stay just past Puerto Viejo in Playa Cocles at the new Lanna Ban Hotel, with bungalows built in an exotic Bali-style, for $72 a night in a double room with breakfast included. In high season, you’ll pay from $70 to $120 a night for the same hotels. Vacation rentals in Puerto Viejo start at $53 a night for little bungalows just off the beach, up to $131 a night for larger homes by the beach. They are $117 to $146 or more during high season.

This is also the best time of year for sea turtle watching. The amazing phenomenon of hundreds of thousands of sea turtles coming ashore all at once to lay their eggs on Costa Rica’s Ostional Beach, on the upper Nicoya Peninsula in the Guanacaste province, is one of the world’s most spectacular natural events.

Olive Ridley sea turtles are famous for their arribadas (meaning “arrivals”) at Ostional National Wildlife Refuge. The mass arrivals happen from mid-June to December. The only way to see the turtles at Ostional is on a guided tour. The eco-friendly travel agency Costa Rican Trails offers a turtle tour starting at $45 per person.

In the Pacific-coast town of Nosara, the beaches of Playa Guiones and Playa Pelada stretch long and wide on a coastline devoid of high-rise hotels and buildings. The area is a haven for yoga schools and retreats, surf shops and schools, juice bars, organic-food restaurants, boutique shops, and art galleries. Now in December when it’s not crowded, it’s a fun place to walk around or rent a bike and take in the colorful town and neighborhoods. At this time of year, the dust that comes with dry season from the packed-earth roads has not yet started.

To stay, Jungles Edge Yoga & Surf Retreat in Nosara offers double rooms for $45 a night in early December, compared to $65 and higher in high season; or Giardino Tropicale starting at $95 a night for a standard double room, which goes up to $105 later in December.