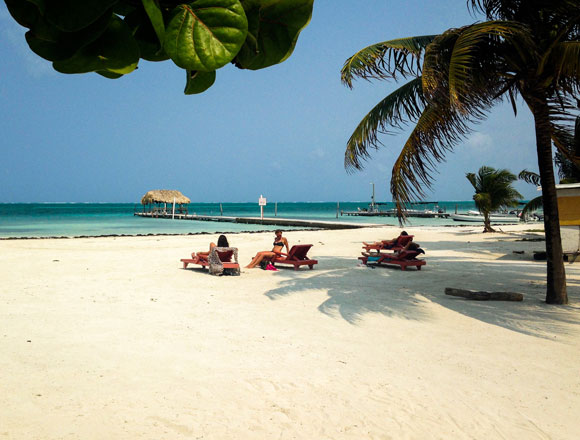 On Caye Caulker, you can halve your cost of living while improving your quality of life. ©Ann Kuffner

Front Street got its name because, to put it plainly, it’s in front. That is to say, it’s in front of Middle Street and Back Street, the other two primary lanes on tiny, five-mile-long Caye Caulker, Belize.

Front Street faces the sea. And walking along its packed-sand surface, you can take in the shifting, aquamarine hues of the Caribbean and watch the waves roll over the Mesoamerican Barrier Reef just a mile offshore. Tidy pastel lounge chairs on the beach beckon visitors to relax. Well-worn, wooden fishing boats pulled up on the sand lend an air of authenticity to this island, which has escaped the mass-market vacationers.

You’ll meet visiting divers and deep-sea fishing enthusiasts joining residents lounging on their decks and floating in the sun-warmed sea. Others sit at palapa-shaded tables, half submerged in the water, sipping frosty Belikin beers ($2.50 a pop) or cups of rum punch overflowing with pineapple and mango.

As you stroll south, the seafront widens into an expansive, soft-sand beach lined with lime green, yellow, orange, and plum-colored kiosks. They tempt you with margaritas, beers, and sweet treats. Occasionally a golf cart drives by, but most people get around on bicycles, or on foot.

Caye Caulker is quintessential Caribbean—a rare find these days. Life is simple, laidback, and close to nature. It’s a perfect spot if you enjoy swimming, diving, fishing, and snorkeling. A growing arts scene is attracting painters and other artisans who appreciate the quiet lifestyle and draw inspiration from the unspoiled, natural beauty.

And right now, Caye Caulker is sitting in a “sweet spot.” It still feels old school, with its palm-lined beach and two-story clapboard homes (no high-rises here). With fewer than 2,000 residents, there’s room to move, and barely any traffic. Yet the island has reliable electric power, water, and internet service. There’s a remarkably rich mix of restaurants, bars, and coffee houses. And it’s English-speaking, which makes it easy to adjust to life here.

Best of all, Caye Caulker offers great value compared to most other Caribbean islands. A long-term rental here typically goes for $1,000 to $1,200 a month. By contrast, a similar rental in the Bahamas or the British Virgin Islands would run closer to $3,000 a month. And from what I hear from expats on the ground, it is much more difficult to get residence and/or start up a business in many of the more popular Caribbean spots.

If you’ve dreamt of immersing yourself in the Caribbean island lifestyle, but didn’t think you could afford it, take heart: The window of opportunity is open on Caye Caulker—for now. During my recent visit—I live on Ambergris Caye, the next island over—I was shocked by how many new B&Bs and boutique hotels had been built during the last year. Upscale restaurants and shops are starting to pop up. And every time I fly over the island, it’s clear that development is taking place on the north side, which is accessible only by boat. If history is any guide, all this development will result in rising prices over the coming years. The time to get in is now.

I’ve lived on Ambergris for more than eight years, but I visited Belize many times before I moved here. Caye Caulker today reminds me of Ambergris two decades ago, before development took off in earnest and prices rose.

In contrast to other Caribbean islands, on Caye Caulker today you won’t spot a single international hotel or chain store. Every establishment on this island is unique, imbued with the owner’s personal touch. And the island isn’t overrun by cruise-line tourists. 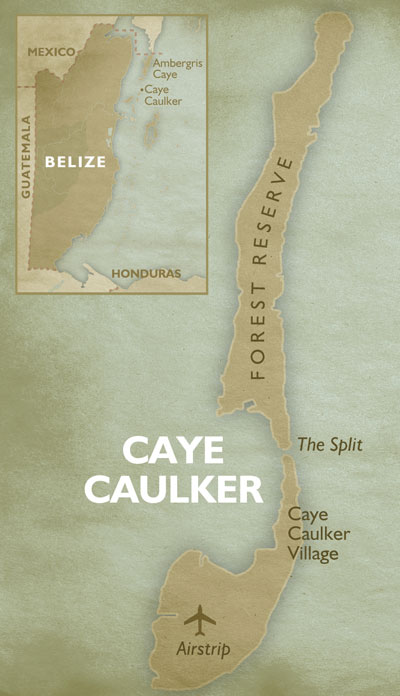 The values and business opportunities here are excellent today, something expat James Lynskey recognized the first time he visited. A Florida native, he’d already lived on several Caribbean islands, including St. Kitts, St. Martin, and the Turks and Caicos. Before moving to Belize, he had spent 22 years living in Costa Rica, where he owned and operated bars and restaurants.

James had something specific in mind. “I was looking for a last frontier. My friend told me about Caye Caulker and that the Lazy Lizard was for sale.” After visiting, James and his friend bought this popular local bar and the one-and-a-half-acre property it sits on.

Diana Moore and Tim Nutley, an expat couple who recently moved from Indiana to Caye Caulker, say they spend an average of $1,470 a month, all expenses included.

“It’s much cheaper for us to live here. In Indiana we spent $2,500 to $3,000 a month,” says Diana. “We can live on $1,500 on Caye Caulker. And our quality of life has improved. We go swimming, snorkeling, and fishing. Evening bike rides are enjoyable. By night it’s cooled off and the winds have picked up, bringing a refreshing breeze. After dark you look up and see more stars than you can imagine.”

In part, Diana and Tim’s low cost of living on Caye Caulker is because, with the help of island friends, they found a well-priced, two-bedroom, one-bathroom apartment that rents for just $650 a month. Admittedly, that’s an unusually low rate.

Still, with a six-month or longer lease, you can find properties from $1,000 a month. If you want to give Caye Caulker a test run, budget at least $1,970 a month, all in.

The Expat Lifestyle on Caye Caulker

Depending on the season, the number of expats on the island fluctuates between 75 and 500. Many are snowbirds, only coming for the winter. Those who own homes, B&Bs, or hotels spend more time on the island. Expats who own a business that demands their attention live here full-time.

It’s easy to travel back and forth to the nation’s capital, Belize City, for errands. You can take a water taxi or a turbo-prop plane. Most residents take the high-speed water taxi for their local trips, priced at $25 round-trip. It takes 45 minutes to get to Belize City and 30 minutes to reach Ambergris Caye. Flights take 15 to 20 minutes, but are pricier, at $80 round-trip to Belize Municipal Airport.

Many expats here are business owners. The Belizean government encourages expats to start up and operate businesses that employ Belizeans. Because of this, you’ll find expat-owned restaurants, bars, art galleries, and gift shops. Expats who own bricks-and-mortar businesses tend to put in long hours. But they say they thrive on the island lifestyle, living near the sea and interacting with the diverse visitors who come and go.

Lee Vanderwalker is one of them. She left Michigan behind and moved to Caye Caulker in 2001. Lee opened her art gallery, Caribbean Colors, a year later. Over the years, she’s moved her gallery four times and added a café. She’s also a professional photographer. Lee enjoys creating and merchandising her art, jewelry, and photographs, which keeps her busy. But she still finds time to enjoy Caye Caulker’s beauty. “I love to leave work and go to the Split (which divides the northern and southern portions of the island) for a quick swim or a little soak near sunset on the west side of the island,” she says.

Paulette Salo, from Minnesota, moved to Caye Caulker two-and-a-half years ago, at 73. Her friends tried their best to talk her out of it. But the very first time she visited Caye Caulker on a vacation, she knew that it was where she needed to be.

“I got off the boat, stood on the dock, and immediately knew I would live here,” she says. She returned to Minneapolis, packed her things, and moved full-time to the island. And hasn’t looked back since. On Caye Caulker, she has made lots of friends among expats and local Belizeans.

“The major difference between living on Caye Caulker and living in Minneapolis is that I am never lonesome on Caye Caulker,” she says.  “My friends come by and ask if I want to go swimming; to go to breakfast, lunch, or dinner; to see a concert or movie; to visit other friends; or just sit on the beach and look at the beautiful water. I love knowing that there are people concerned about me every day. And I love meeting people from all over the world who visit this tiny island.”

Diana Moore agrees. “We couldn’t be happier with our social life. We have more friends here than we did back in the States. Sometimes we get up and go swimming in the sea, have a few afternoon cocktails, and meet up with our friends at the Sports Bar to catch up.”

The Barrier Reef Sports Bar & Grill is where expats who live full-time on the island gather and hang out. You could say it’s the “Cheers” of Caye Caulker. Facing the beach, it’s personal and intimate, and you’ll often see expat owner Scott Waters meandering through the crowd, chatting with the regulars.

The best time to meet a core group of expats who live on the island is Friday afternoon, when the weekly jam session is in full swing. Anyone can join in and participate. The Belizean dip, coconut shrimp ($10), shrimp quesadillas, chicken nachos ($10.50), and onions rings ($5) are all worth a try. And it would be a shame not to sample the piña colada and dirty banana cocktails, at around $8 each.