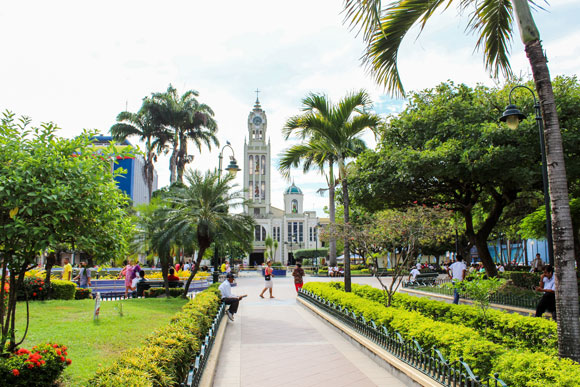 From Parque Juan Maltavo (above) at the center of town to the well-maintained malecón, or boardwalk, Machala is a pleasant, walkable city all year. ©Jim Santos

If you’re someone who is looking for the conveniences of a good-sized city close to the beach and the mountains—I may have found the sweet spot for you. Especially if you are a trailblazer—someone who would enjoy the experience of immersing yourself in a new language and culture.

Although my wife Rita and I have lived in Ecuador for three years now, this country still throws us surprises like this one. Let me introduce you to Machala.

This city of 250,000 people has stayed off most expats’ radars. Even Ecuadorian tourists rarely visit. But whether you’re just visiting or looking for a full-time retreat, this city is worth checking out. It’s home to a diverse culinary scene, as well as to all the other amenities (malls, healthcare, and more) you’d need for a comfortable life, without being too big or overcrowded. It enjoys warm weather (think 70s F and 80s F) year-round, and easy access to a pristine beach just 30 minutes offshore, on a nearby island.

Big bonus: Even by Ecuadorian standards, Machala is an affordable place to live. Rents in the downtown area for a three-bedroom apartment or condo range between $350 and $500 a month. Newer rentals in the city’s eastern section run about $100 more. Public transport is cheap and readily available, so you won’t need a car. And a couple can expect average electric bills of about $55 a month. All told, this means a couple who are renting can live very well on $1,200 to $1,500 a month.

Machala is only a three-hour drive (or a $4 bus ride) from the large port city of Guayaquil, but it is tucked away in a part of the country that narrows as it nears the border with Peru. As you approach Machala, you will begin to understand why it’s called the banana capital of the world. You drive past miles and miles of banana farms, which stretch into the distance as far as the eye can see. Canvas pavilions shade thousands of bananas in piles, and truck after truck hauling bananas passes you by. Machala sits in the incredibly fertile lowlands between the Andes and the sea. It’s also an important shipping port for cocoa and coffee.

The city can be divided into three very different areas: Puerto Bolívar on the waterfront; the downtown business center; and a newer section on the main road. This last area features large shopping areas, a mall, condos, gated communities, and the Universidad Técnica de Machala, a technical college.

Machala sits right where the Guayas River, coming from Guayaquil, empties into the Pacific Ocean. But direct ocean access is blocked by Isla Jambelí, an island just offshore. Local beach-goers take a ferry for $1.50 that follows a small river on the island to a dock on the other side, near the beach. The ferry winds its way through an estuary, affording views of many different species of bird on the 30-minute trip. This extra step has meant that Machala has never become a “beach” destination, despite the beauty of the Jambelí Beach.

Once you disembark at Playa Jambelí, you find an oasis of tranquility far removed from the city bustle. Since there is no road traffic, the beach is very quiet, with beautiful white sand and a gentle surf. Visitors tend to be locals with their families, so it feels very much like a private beach. Beach-goers have their choice of many small cabañas serving food and drinks, and there are even two hotels on the island.

Because of Isla Jambelí, Machala’s malecón (boardwalk) is really more of a riverwalk on the Guayas estuary. This walkway is attractive, wide, and well maintained, with many planter islands with shade trees, benches where you can take a break, and trash cans to keep it clean. Here you can stroll or sit and watch the ships come and go. At one end is a pier lined with stalls selling all manner of beach supplies, fishing gear, and souvenirs. You can catch a boat for a fishing trip, or just enjoy a good view of the docks.

Across from the malecón, on the other side of the wide, four-lane road, is a string of seafood restaurants offering just about every type of marisco (seafood), prepared in a variety of styles. Machala is famous for shrimp, so you could spend many days sampling the shrimp dishes alone. La Casa del Marisco (Seafood House) has no less than 15 different shrimp dishes.

One of the best seafood offerings I’ve had in this area is the corviche. These pastries look like small pies, but inside they are filled with a mixture of fresh tuna, peanut butter, and plantains (green bananas). This simple base yields a wide variety of corviches, as chefs will use things like garlic, onions, cabbage, carrots, and one or more spices to make their offering unique. Corviches are served as snacks, or with a small salad or soup as a meal.

Machala’s downtown is very attractive and very walkable. The sidewalks are wide and clean, and as the climate is very plant-friendly, Machala has a lot of greenery and flowers.

The square in the center of town, Parque Juan Maltavo, has a beautiful church at one end and government buildings at another. The church has a soaring clock tower in its center, and smaller domes spire on either side. Clear and stained-glass windows in all three columns create stunning effects out of the sunlight. Banks and shops complete the blocks surrounding the park. It is a lovely space, with lush landscaping and a central fountain. Wide walkways with colorful geometric patterns give you ample room to roam about the square, enjoying the flowers and trees.

Although we didn’t see a single North American during our time in Machala, my wife and I were greeted with smiles everywhere we went, and were offered greetings as we browsed through the stores. Most locals spoke English poorly, but everyone we talked to in our halting Spanish was friendly and did their best to help us out.

For a city with no tourism, Machala has a great selection of restaurants. There are plenty of coffee shops and places with comida típica (typical or local food), but there are also pizza joints, burger places, Chinese restaurants, and more. We had a great meal at a Tex-Mex place called the Red Bean (you can find it on Facebook). The food was delicious and the margaritas cold and strong. On our visit, I had a combo grill platter that included a large piece of chicken, a steak, fries, and a salad, served on a wooden cutting board. My wife had a huge chicken burrito, and we each managed to drink two large margaritas (we were walking the two blocks back to the hotel). Our bill, with tip, was still just under $30.

Machala has one of the strongest local economies in Ecuador. Nowhere is this economic strength more obvious than on the east end, where modern commercial and residential areas make up the third section of town. This area has experienced a building boom since 2007, and more construction is on the way. This is the section of town I liked best; to me, it seemed the most attractive place to live, due to its many conveniences.

The east end of Machala is also where you’ll find high-rise condo buildings and upscale gated communities, some still under construction. The technical college is here, as well as at least three other institutes for higher learning.

Being a city, Machala benefits from good healthcare facilities. In the downtown are two large hospitals, one public and the other private. A hospital is planned for the east end, but for now there is no shortage of professional health services or private clinics. You can find modern, well-equipped offices and clinics for emergency services, women’s health and maternity, pediatrics, dental and orthodontics, and cosmetic surgery.

Rents are highly affordable in Machala. But if you’d rather own your own home, you also have options here. I found a four-bedroom, three-bathroom condo in the downtown area, blocks from a SuperMaxi supermarket, listed for $70,000. A newer, furnished home with three bedrooms, three bathrooms, a garage, and a pool is priced at $159,000.

If you are considering a home in Ecuador, and you are more of a city mouse than a country mouse, take a trip out to this corner of the coast to see for yourself what Machala offers.

Machala: What You Need to Know 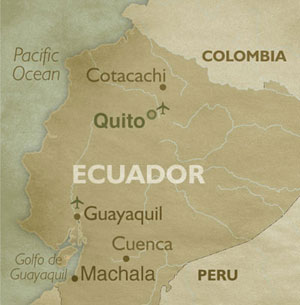 Nickname: The Banana Capital of the World.

Get there: You can fly into Guayaquil from Miami, Fort Lauderdale, and New York-JFK. From there, it’s a three-hour drive (or $4 bus journey) to Machala. You can also get flights from the capital, Quito, to Santa Rosa Airport, about 12 miles outside of Machala, with TAME Airlines.