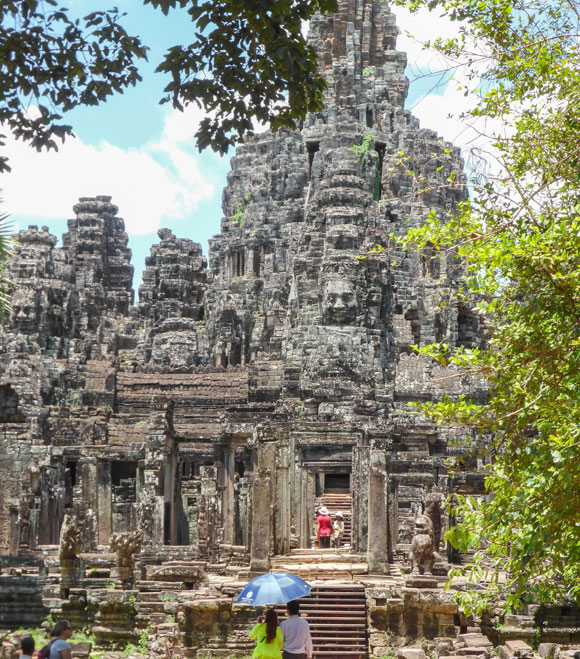 The magniﬁcent ruins at Angkor Wat were just one of the delights Kathy Hall enjoyed on her adventure—and all for just $1,300 a month. ©Eoin Bassett

Tucked into a secluded nook in the ancient Bayon temple, with benevolent stone faces smiling down at me from every angle, I felt overwhelmed at finally being in Angkor Wat, Cambodia, after years of day-dreaming of a life of travel. I remember thinking I should pinch myself. But instead I soaked up all the atmosphere I could, knowing this type of adventure would shape my future for years to come.

Barely a year before, I could scarcely have imagined that I’d travel right across Southeast Asia—on my Social Security money alone. One morning early in 2015, I woke at dawn to get ready for a 10-hour shift as a shuttle driver. Although I truly enjoyed this fun “retirement” job, at 63 years old, my bones were beginning to creak, and the prospect of working this hard until I dropped was depressing. That was the day I met a Filipino passenger who changed my life forever.

Driving him home, I listened with interest as he explained that the exchange rate in the Philippines was 44 pesos to the dollar. This got me thinking about just how much further my money could stretch overseas.

I quickly figured out that there were a host of countries where my Social Security would be enough to live and travel on quite comfortably. After six months, I finally decided to quit my job, sell all my possessions, and take off for Southeast Asia, an area that offered several possible low-cost retirement destinations.

The greatest adventure of my life so far has been traveling through Southeast Asia. It has brought me so much change and experience. Friends and family thought I was crazy, convinced I couldn’t exist on my Social Security alone. But by just jumping in, I learned that it wasn’t such a scary thing, after all. Ultimately, I traveled through six countries on a budget of $1,300 a month, creating some incredible memories along the way. And you can do it, too.

My adventure began in the Philippines in September 2015. I started with two weeks bouncing around from the capital, Manila, to the mountain town of Baguio and finally to the island of Bohol, a haven of white-sand beaches beloved by the expats who live there. I spent the next 10 days there, loving the tiny resort village of Alona Beach for its easy access to the beach and for its friendly locals.

Hotels averaged $25 a night—too high. But the food costs were very low: just $1.35 for my first and favorite Filipino meal, adobo stewed meat wrapped in banana leaves. But I wasn’t ready to commit to a rental. So I booked a flight to Chiang Mai, Thailand, and my adventure truly began.

I found an acceptable hotel near the Day Market for $7 a night and settled in for two weeks. This neighborhood was very doable, with low-cost housing and food costs, as well as easy access to the local lifestyle. I realized Chiang Mai could easily be my home. I knew that the little market with Western foods and smiling faces would take care of my homesickness, while the Day Market, just three blocks from my hotel, was a wonderland of bargains and activity.

Next, I did two weeks in the suburbs northeast of Chiang Mai’s walled old city. I had a wonderful little homestay for $10 a night, with a huge room for me and a shared kitchen. Food costs here ran about $3 to $4 a day for Thai dishes from street stalls, supplemented with the occasional Western meal like pizza.

While there, I journeyed to a stunning mountaintop temple, Doi Suthep. I could not stop taking pictures of the incredible golden domes and statues. I also visited an elephant camp, where I had the opportunity to comfort a mother elephant who had just given birth to a stillborn baby. I walked among the various peoples of a hill-tribe village and wondered at the long-necked women with the rings of brass that had stretched their necks to a foot long or more. I put Chiang Mai on my list as a retirement possibility…but it was time to move on to my next destination: Phnom Penh, Cambodia.

Here I managed to find just the right spot near the Mekong River: a cozy little guesthouse with a restaurant. I stayed for two weeks and ate nearly all my meals there. These were mostly Cambodian rice dishes with an occasional pasta dish, for which the Cambodians seem to have a flair. I ordered these twice a day, at a cost of about $3 each. The room cost me $10.25 a night.

In Phnom Penh, I took the inviting sunset Mekong River cruise for $9, enjoying a couple of complimentary Angkor brand beers and watching life on the river sink into the night. Fishing boats returning home late and villages of houseboats were stacked along the Mekong’s banks, with cooking fires warming dinners.

A six-hour bus ride took me to the resort town of Siem Reap, with amazing Angkor Wat nearby. Here I found a wonderful hotel with an elegant, carved staircase and rooms to match, a lovely pool, and a tremendous staff. The air-conditioned room created a sanctuary from the stifling heat. The complimentary breakfast made the $16 rate more affordable.

Angkor Wat alone is reason enough to travel thousands of miles. The world’s largest religious monument, it is a 402-acre complex of stone temples in varying degrees of disintegration. Yet it still holds a grandeur that left me stunned and sometimes frozen in appreciation.

From Cambodia, I moved on to Vietnam, visiting Ho Chi Minh City, Hoi An, Hai Long Bay, and finally Hanoi. I loved all the cities, but especially Hanoi. With its lingering French aura and tree-lined streets, Hanoi made me feel sent back in time. Lingering over a rich cup of coffee at a café bordering Hoan Kiem Lake, in the city’s central park, I imagined writers gathering here in bygone days to pen short stories about this city’s elegance.

I stayed in the Old Quarter in a tiny, ancient hotel for $11 a night. Again it came with a free breakfast, this time of eggs, fruit, and a baguette. Satisfying my appetite was a low-cost proposition in Hanoi, with food stalls everywhere offering meals for $1 or less.

An 11-hour bus ride from Hanoi and a four-hour boat tour of Hai Long Bay, with a generous seafood lunch, cost $32. The limestone islands of the bay stretch upward at odd angles, crusted with trees and small shrubs and displaying their glory in splashes of green, gold, and white.

Hoi An, a little beach town north of Da Nang, offered an immaculate guesthouse off the beaten track, with breakfast, for just $11. However, getting to the beach or anywhere else was expensive: Tourists get around by taxi throughout Vietnam, and I was about five miles from town. White sands facing the South China Sea soothed my soul, and the town itself was a treasure trove of shopping and restaurants. I stumbled into Vi Café, had their spring rolls for lunch, and returned later for pizza and gin and tonics. All of it was extremely cheap. One great thing in Hoi An is that many restaurants offer fresh-brewed beer for just pennies: less than 30 cents a glass and as low as 13 cents.

An overnight train ride to Malaysia, at $14, fulfilled a childhood dream. I boarded at 10:45 p.m. and the train’s motion quickly rocked me to sleep in my bottom berth. At about 7 a.m., the passengers seemed to awaken in unison, and suddenly a porter was there, converting my berth back into a seat and table, while I wandered to the dining car and enjoyed a simple breakfast.

I spent the next three months in this wonderful country, exploring Penang, Ipoh, Kuala Lumpur, and finally Malacca. I found things to love and managed to stay within my budget quite easily.

In Kuala Lumpur, I was overwhelmed by its grand infrastructure and towering modern buildings standing just feet away from beautiful old mosques. Throughout Malaysia, but especially in Kuala Lumpur, the transportation is amazing. I rode the metro several times and found my way easily through the city. I was fortunate to choose Petaling Street for a two-week stay. It’s right in the heart of Chinatown, with several restaurants as well as shopping for everything imaginable at low prices. I bought myself reading glasses for dollar-store prices and a new leather bag for less than $25. And the daily excitement and crowds really appealed to me.

When I finally landed in Malacca (also called Melaka), I stayed more than two months. Malacca is a mix of old and new, with a peaceful and very lovely river walk (take the river cruise for under $4). Jonker Street, basically the Chinatown of Melaka, has a lively street scene, including a Hard Rock Café, where I treated myself to a huge Cobb salad and two gin and tonics for $20.

I’ve made wonderful friends traveling, and I’ve learned how to do it better from them. I have seen things I never, ever thought I’d get to see, and I’ve enriched my life in more ways than I can imagine. It certainly beats working 10-hour shifts as a shuttle driver.

I’m now on the second leg of my adventure, exploring Latin America and using everything I learned in Southeast Asia. I’m not sure yet where I’ll end up settling down. But I’m certain I’ll make more memories and friends along the way.

Editor’s Note: Kathy has been able to travel the world on just her Social Security, and you can too. International Living’s “Secrets of the Roving Retirees” Webinar offers the best advice there is for spending extended time overseas as a “roving retiree”. Why not see for yourself, and learn how you can explore and experience the world while spending less.

Vagabond in Style Across Southeast Asia

You don’t have to be wealthy to travel in comfort through Southeast Asia.
Airfare is generally inexpensive. For instance, one fare from Ho Chi Minh City to Da Nang cost me just $28, and the highest was $132. Train travel is also affordable and a great way to see the countryside.

Don’t be afraid to use smaller airlines like Nok Air and VietJet. I found both to be at least as good, if not better, than Air Asia, which charges a huge rate for more than 15 kilos (33 pounds) of luggage. It once charged me three times my airfare for an extra eight kilos (around 18 pounds). Neither of these small airlines charged me extra.

Before you go to Chiang Mai, order a copy of the Nancy Chandler map of Chiang Mai. It is a cute, kitschy and incredibly useful map to all you’d want to see and do. I found one in a used book shop in the Old City, but they aren’t easy to ﬁnd in Chiang Mai.

Accommodation is affordable. In Chiang Mai, I stayed in the Poi De Ping Guesthouse, where a private room with bath costs from $10 a night. In Malacca, you’ll ﬁnd the same comforts at the Sunﬂower Hotel from $11 a night.

Healthcare in Southeast Asian countries is improving all the time—many now have JCI-accredited hospitals. I could afford my insulin pens in all the countries I visited, with costs—without insurance—about a quarter of U.S. prices.