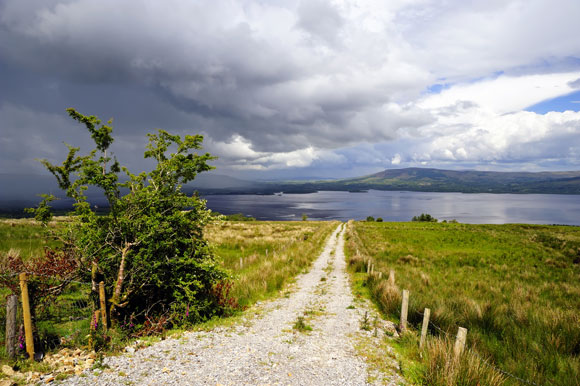 In the countryside of Ireland’s County Roscommon, you’ll find sights of myth and magic. ©dreamstime.com/Michael Walsh

It takes a moment to find it, the entrance to the Morrigan’s cave. Growing above it is a hawthorn tree, upon which ribbons are tied. In the mud at my feet is a guttered-out candle. A place of magic, a fairy tree with tributes on its boughs.

I’m in County Roscommon, in the west of Ireland. Pigs of magic come from this cave, and red birds whose breath withers the world. And the Morrigan—the pagan Irish goddess of war, fertility, and sovereignty, who takes the shape of a raven. All around it in every direction are great Neolithic mounds and Iron Age tombs and forts. This is Cruachán, the most mentioned royal site in the old Irish texts, and totally off the tourist trail.

Cruachán is heavily associated with Samhain, the Celtic festival from which we get our modern Halloween. On this night great feasts were held, men fought battles with demons, spoke with ghosts, and made love to supernatural women. The gods whispered secrets from the cave. The harvest was in.

Irish royal sites are often found near gateways to the other world, where the fairy folk live out of time and space: neither living nor dead, just different.

You can climb into this cave (bring a flashlight), and though the hole is small, the cavern inside opens up. It’s safe to explore, and you can get directions at an excellent interpretive center (Rathcroghan.ie) in the nearby village of Tulsk.