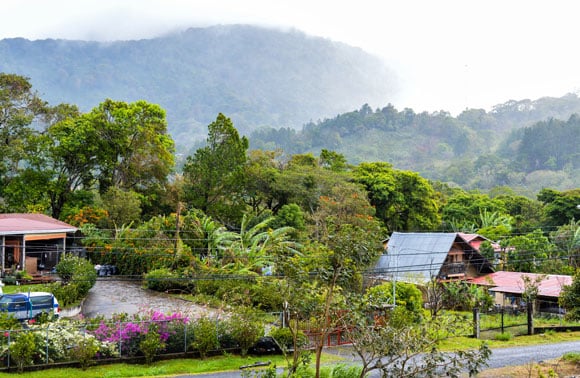 With temperatures ranging from the 60s F to 80s F year-round, Boquete, Panama is a great spot for a spring-weather retreat, as Brandy and Bob Gregory have discovered. ©Conor O’Brien

A perfect climate was a major requirement for Brandy and Bob Gregory when they sought their overseas retirement home eight years ago. They found their ideal weather in the highland town of Boquete, in western Panama.

“We’re from Nashville, Tennessee, and we wanted to move to a place that’s not too cold and not too hot,” says Brandy. “When we came to Panama and I saw Boquete for the first time, I said to Bob, ‘This is paradise.’”

Bob, a former naval officer, and Brandy, a registered nurse, have been living in Boquete since 2008. “It was Bob’s idea to move overseas, and I just went along,” says Brandy. “He wanted to live someplace different and we did lots and lots of research, especially comparing climate data. We didn’t want to have any heating or air conditioning bills, and Boquete is just perfect.”

Boquete’s perfect weather is due to its altitude, as it lies at about 3,300 feet. The highlands across Panama are formed by the mountains of the Cordillera Central, and the highest of these is Barú Volcano. At 11,400 feet, it towers over smaller peaks in Chiriquí Province, and its rainforest environment is responsible for Boquete’s cool temperatures and abundant rainfall. With daytime highs in the 80s F and nighttime lows in the 60s F, it feels like springtime throughout the year.

“We visited Panama for a week, because I had to smell the air and feel the dirt before I could make any decisions,” says Brandy. “We looked at the house, went back to Tennessee and talked it over, then bought the house and came back to do the paperwork.” The couple bought a home in Alto Boquete, a short distance from the town center off the main highway. “We have amazing neighbors. They’re just wonderful, friendly people, and we’re the only foreigners who live in this neighborhood,” says Brandy.

Another major difference is their cost of living, which is noticeably lower. “I would estimate our monthly budget to be less than $2,000. We own our home and we have three vehicles (one is Bob’s ‘pet project’ Land Cruiser). We have solar panels, so our electric bill is only about $40. Internet and cable service run about $90, and we spend about $500 a month on groceries and necessities. We go out to eat with friends and attend some of the music and theater productions, as well,” says Brandy.

Boquete has a strong expat presence, and many expats here use their spare time to give back to the local community. Brandy, for instance, loves to get involved with the local Knitters and Quilters group.

Brandy and Bob take part in other activities, as well. Bob is a photographer who participates with the local club and has shared his photos in calendars produced by civic groups to raise funds. He and Brandy have been involved with community theater productions, and Brandy helps in local efforts to promote health awareness by offering free blood-pressure checks at the weekly market.

“I feel that what I do here makes a difference, and I never really had the same feeling in Tennessee,” she says. “My job there was challenging and rewarding, but here what we do is more meaningful and has more of a direct, local impact.”

Brandy and Bob are happy with their decision to live in Boquete, and they feel comfortable in their adopted community. “We love the quiet environment where we live, the wonderful people, and especially the highland climate,” says Brandy. “It brings me great joy to do something for others and feel like I have a purpose. And if I can help someone else with their transition to life in Boquete, that’s great!”

Editor’s Note: You too can find happiness in Panama…whether it’s in the mountains, like Brandy and Bob…along the beaches of the Azuero Peninsula…or among the glittering lights of Panama City. Discover where in Panama is right for you when you join us for the 2017 Fast Track Panama Conference this coming February. You’ll hear from expats who’ll tell you what’s life in like all around the country…can pick the brains of our editors and correspondents…and get all your visa and residence questions answered by the experts.