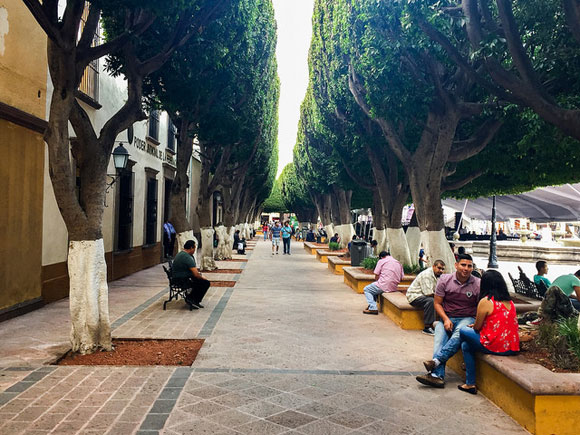 Querétaro’s mild climate is a big draw for expats looking to escape the heat. ©Jason Holland

In the southern U.S., summertime heat and humidity drive people indoors into the air conditioning. That means enjoying the outdoors is a no-go for much of the year. And utility costs can go through the roof. This is certainly true in Atlanta. Of course, spring and early fall are comfortable and residents relish those times.

Tom and Christiane Wheaton certainly did. So when they retired in 2006, they decided to make their home in a place that was spring-like nearly all year round. “We didn’t want to live in that Atlanta heat anymore,” says Tom.

In the city of Querétaro, in Mexico’s Colonial Highlands, the days are mild and temperatures cool off—enough for long sleeves or perhaps a light jacket—when the sun goes down. Nights can get close to freezing in January and February, with 65 F temps during the day. But for most of the year, it’s just right, whether you want to head out and enjoy the city or relax at home—which, in the Wheatons’ case, is a meticulously restored colonial house.

“With the high ceilings, we don’t feel the heat. And south-facing windows keep us warm in the direct sunlight on cold days,” says Tom. “We live outdoors all the time,” he adds, referring to their courtyard, which is filled with tropical plants and fruit trees. They keep large glass doors and windows open, keeping fresh air circulating through the house and natural light illuminating high-ceilinged rooms. With no need for air conditioning, their electric bill is just $26 every two months.

They live in San Gremal, one of Querétaro’s oldest neighborhoods. It sits in the heart of a restored colonial centro that has a history going back to the early 16th century.

For Tom, an archaeologist, living in the historic centro—and taking up residence in a historic home—was especially appealing. “I’m fascinated by the history and archaeology in Mexico,” says Tom.

Through personal travel, vacations, and Tom’s work specializing in Latin America, the couple had traveled throughout Mexico, Latin America, and beyond. But Querétaro, with its authentic Mexican vibe, caught their eye.

“After a few months here, we knew this was the place we wanted to be. It’s clean. It’s culturally aware, with universities and a great historic district,” says Tom. “There are always concerts and gallery openings. It’s a lively place. We slowly found the expat community. It’s still very small, although it has grown considerably in the last three or four years. If you walk to the Plaza de Armas, you’re bound to bump into somebody you know.”

Within a few months of moving down, the couple had friends and a full plate of activities.

“I’m very busy. Monday I volunteer at a school,” says Christiane, who also takes classes with a local women’s group. “I walk everywhere. I like the fact that I can do a lot without spending a lot.”

Weather and culture were big draws for the couple. But low costs also played a part. Querétaro is considered expensive within Mexico, says Tom, but it’s still very low cost compared to the U.S. And the current exchange rate (19 pesos for $1 at time of writing) makes a U.S.-based income like Social Security, pensions, or investment dividends stretch even further.

Produce is cheap, as are meals out. Try about 25 cents for a pound of potatoes, or a dozen limes for $1. (“I go to the market for fruits and vegetables,” says Christiane.) And a “fancy” meal at an international restaurant will run $7 or $8 a person. They pay their housekeeper $15 for four hours—that’s twice the going rate. Water is $12 a month. And their cable/internet package comes to $36 to $50 a month.

They’ve also saved on medical care. A prostate operation, paid in cash, was $2,000. Cataract surgery with an expert physician was $2,000 for one eye. When Chistiane fell and broke her arm recently, the full treatment, including emergency care and surgery, was $132, plus $106 for the hospital stay.

“The cost for a doctor here is like it was in 1960s Connecticut,” says Tom. “And we pay next to nothing for a private ambulance service.”