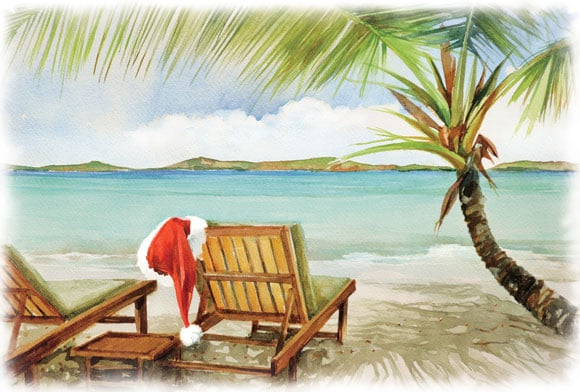 You can enjoy Christmas at the beach in tropical destinations around the world. ©Colleen Clapp

North American winters can be brutal. So why not follow the example of our winged friends and head south? And while you’re at it, head to the beach, where you can enjoy the sun, sand, and surf. Leave the jacket and long pants behind and make a swimsuit and ﬂip-ﬂops your uniform.

You’ll feel better. You’ll look better, thanks to the radiant glow. And it’ll be a lot of fun, too—your days will be spent lounging in the hammock…enjoying seafood lunches and cocktails at sunset.

Whether you want to spend the rest of your days in warmer climes…or become a “snowbird” and follow a migratory pattern south, spending three, four, or ﬁve months at a time abroad, there are several spots around the world you should check out.

Costa Rica’s Gold Coast has been a playground for vacationers and beach-minded expats for years. With numerous 18-hole golf courses, sunset sailboat cruises, offshore sport fishing—as well as beach bars and top-notch restaurants—there’s never a shortage of things to do. In the middle of the action are the white sands of Playa Flamingo. It’s a purpose-built resort town. And as one of the most developed beach areas in Costa Rica, it offers a wide variety of property.

A fully furnished, luxury two-bedroom condo, with ocean views and a large balcony, will run you $220,000. Included in the price is access to the amenities at a nearby resort, including use of the swimming pool and gym.

Penang Island, Malaysia: Seaside Fun in a Crossroads of Asia

Penang Island, just off the Malaysian mainland near the Strait of Malacca, is home to some of the country’s most beautiful beaches. Many are little-visited. But the Batu Ferringhi district is the site of several beach resorts, entertainment venues, and family fun…as well as plenty of low-cost, ocean-view properties. It’s the perfect spot for a wintertime coastal getaway. And as a suburb of colonial George Town, it has quick access to that city’s cultural events and fine dining.

Many expats rent here, due to restrictions in buying property. It’s very affordable. A three-bedroom ocean-view condo in Batu Ferringhi is available now for $523 a month, and it’s fully furnished. Amenities include pool, squash court, tennis court, and 24-hour security. Close by is a three-bedroom condo for $485 a month. It’s also furnished, with an ocean view.

One of Spain’s Canary Islands, Lanzarote is well known to European tourists. Thanks to its location 62 miles off the West African coast, Lanzarote’s climate is not too hot, not too cold year-round, and most days are sunny. Puerto del Carmen is the most popular coastal town here, thanks to just under four miles of golden-sand beaches, as well as development—including nightclubs, bars, restaurants (seafood is always on the menu), and more—that’s ready-made to put you in vacation mode. Also worth checking out is the Timanfaya National Park. Here, you can ascend the black slopes of the Montañas de Fuego (Fire Mountains) on the back of a camel, enjoying some of the most breathtaking views of the island.

A plus: no high-rises. Just low-slung housing that blends in nicely with the sleepy fishing village around a small harbor that this place used to be. Plus, it’s a place for windsurfing, boating, and other watersports…or just relaxing under one of the umbrellas you can rent on the main beaches. You can have your fun in town…and then retreat to some of the quiet coves nearby.

After the release of the iconic film Night of the Iguana in 1964, its setting, Puerto Vallarta, became a go-to spot for North American vacationers. Its popularity with visitors and expats has only grown. And no wonder; it has several beaches, marinas, and residential resorts. And the 12-block-long malecón in town is lined with restaurants (from high end to simple seafood shacks on the sand), boutiques, and live music venues. There’s always something to do in Puerto Vallarta.

A three-bedroom condo, in a residential complex with marina and shopping/dining, as well as large community pool, is listed for $129,000.  The seaside malecón is right there, as well. On popular Playas Gemelas beach is a beachfront building with a furnished two-bedroom condo available for $289,000.

Antigua, the Caribbean: The Sailors’ Haven

The Leeward Island of Antigua (which, together with Barbuda, forms the country of Antigua and Barbuda) is a haven for the yachting set in the Caribbean, thanks to its safe harbors and its annual regatta. Yet it remains one of the least-visited spots in the region—although “high season” in winter does draw the most visitors. The interior is hilly and covered in forest…the green contrasting with the turquoise waters that surround it, as well as with the candy-colored villages that overlook the water and cluster on the coast. The beaches are white sand, set on discrete coves and bays.

A two-bedroom, recently renovated villa, walking distance to the water and to shops in the yachting center of English Harbor, can be yours for $289,999. It has a large veranda and a garden with fruit trees and tropical plants. In a gated development is a two-bedroom home set on the marina, with a deck over the water, available for $275,000.

Drop Into the Christmas Markets of Europe

There’s just something about spending the holiday season someplace where you’re warmed up by hot cocoa or mulled wine (glühwein, in German—try it with a shot of brandy if it’s an especially blustery evening), enjoyed with grilled meats and sweet holiday treats. Where snowflakes fall lazily in the evening and decorate the windowsills and dust large Christmas trees set up in public spaces.

It’s the classic Christmas of storybooks. And in Europe you can really get in the holiday spirit in the large Christmas markets. You can browse stalls set up by dozens of vendors offering up Christmas decorations, knick-knacks, traditional crafts, and, of course, Advent calendars.

Cologne, in western Germany, hosts several markets in the run-up to the holiday. The best known is the Am Dom. The backdrop is one of the largest Christmas trees in Germany and the Gothic cathedral, a UNESCO World Heritage site. While shopping, don’t forget to sample plätzchen, or Christmas cookies. A one-bedroom furnished apartment near the Rhine River will run you $911 a month. Another one-bedroom, also furnished, is listed at $621.

The Alsace region has changed hands between France and Germany many times. Although it’s French now, Teutonic customs are still strong. And that’s definitely the case with the Christmas market in Strasbourg. Founded in 1570, it’s said to be one of the best markets in Europe. It features 300 stalls across 12 locations surrounded by dozens of miles of Christmas lights and decorations. A studio apartment in the heart of the city, furnished, will run you $834.

From mid-November onward, Christmas markets take over squares across the Austrian capital, Vienna. Freyung Square, for instance, has held an annual Christmas market since 1772. Here, you can pick up authentic handicrafts (glass baubles, traditional mangers) and Christmas tree decorations as the aroma of hot punch tempts you at every turn. Right now, you can rent a one-bedroom apartment in Vienna, close to the tram line, for $1,039 a month.