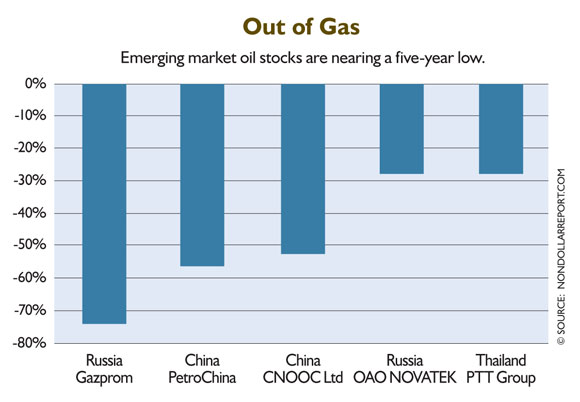 Now May Be the Time to Buy Foreign Oil

U.S. energy stocks have not dropped nearly as much as their emerging market counterparts. Did this divergence occur because U.S. oil and gas stocks are more profitable? Nope, it’s the opposite. The collective earnings of the companies in the NYSE Arca index have dropped substantially over the last 12 months, while earnings of the companies in the emerging markets index are roughly flat.

So it may be a good time to start scouring the globe for oil stocks that are not merely depressed, but deeply depressed.

Unfortunately, there are no ETFs that track emerging market oil stocks exclusively. The iShares MSCI Emerging Markets Energy ETF liquidated its holding on August 21…due to lack of demand.

This liquidation is one of those delicious contrarian signals that the time to begin buying is drawing near…or may have arrived.

The chart shows a few of the largest holdings in the now-defunct Emerging Markets Energy ETF. The chart also shows the price change of these stocks since March 31, 2011. Almost all of them are sitting near their lowest levels of the last five years.

These depressed prices do not mean automatically that they are a “buy,” but they certainly deserve a close look.

“The result of Colombia’s referendum in October, which rejected an agreement to end 52 years of violent conflict, sent shock waves across the world,” writes Patrick Little of Nondollarreport.com.

“But despite the surprise outcome of the vote, peace is already palpable for those here in Colombia. So investors are hoping to cash in on a new era of peace and prosperity.

“Although Colombian stocks fell as much as 73% from their 2010 highs to their lows earlier this year, they have advanced nearly 50% from those lows.

“All things considered, the referendum result is encouraging; it shows that Colombia is vying for a more perfect peace deal—one that fosters even more investment opportunity.”

“A country with this much growth potential in a diverse array of sectors—including natural resources, shipping, tourism, and real estate—deserves a peace worthy of its bounty. Colombia has set itself up to be the best emerging markets story of this decade—perhaps of our lifetime.”

Gold Exploration: A Perfect Storm in the Market

“If you don’t already own gold stocks, now might be a good time to buy some,” writes Justin Spittler of CaseyResearch.com.

At one point, the NYSE Arca Gold BUGS Index, which tracks gold stocks, was up 156% on the year. Gold stocks have cooled down. But it’s natural for gold stocks to take a ‘breather’ after such an explosive start to the year.

“More importantly, the long-term case for gold has never been better. Governments are still racking up monstrous debts. And the stock and bond markets are becoming more fragile by the day.

“During the last bear market, many gold miners were bleeding cash. To survive, they drastically cut costs. For a lot of companies, that meant slashing exploration budgets. This process also helped many companies survive the last downturn. But we may have just reached peak gold production. And if the gold supply gets tight, that could be another catalyst for higher gold prices.”

We live in difﬁcult times for investors. Practically all major asset classes are richly valued in most developed markets. Yields are pathetic, or even negative.

Both U.S. stocks and bonds are expensive. And it’s a similar story in much of Europe. So what’s an investor to do?

In my view, you should rule out bonds altogether. Also rule out expensive stocks, like those in the U.S. and most of Europe. Returns will be poor if valuations stay high. And they’ll be even worse in the medium term if valuations fall to reasonable levels. Buy stocks where you can ﬁnd reasonable prices. There are pockets of value in stocks around the world. Emerging markets (in general) offer reasonable value. And I’ve previously highlighted speciﬁc opportunities in countries such as Norway (in your February issue) and Vietnam (in your June issue).

Over time, demand for gold will continue to rise in places like China and India as raw material for jewelry and electronics. That’s what makes it the “ultimate consumer good.” But it’s also insurance against a new ﬁnancial crisis, since it’s no one’s liability—provided, of course, that you own physical metal.

“But coins aren’t just a key to another time far removed. They are a great asset, offering a way to diversify your investments outside the volatility of the market.

“Collectibles, or what we often refer to as ‘quiet wealth,’ are a way to protect your assets not only from upheaval in the market, but also from the uncertainty we are facing with a government that has accumulated roughly $19 trillion in debt. Collectibles are a wealth solution to add an extra layer of protection in these troubling times.”

“Russian stocks are up 28% this year, measured in dollars, making it one of the world’s best performers,” writes Rob Marstrand of OfWealth.com.

“Despite the recent strong performance, Russia is still a huge bargain that’s likely to deliver highly attractive returns to investors over coming years.

“The MSCI Russia index is set to have a dividend yield of over 7% next year, which is huge in a low-yield world. Adding together the dividends and profit growth, this means that investors in Russian stocks should make about 13% a year, even if the price-to-earnings ratio (P/E) doesn’t rise.

“Buying stocks when they’re deeply discounted—as offered in Russia today—makes the likelihood of big future profits much, much higher.”

“Brazilian stocks spent years crashing,” writes Dr. Steve Sjuggerud of DailyWealth.com. “But that trend has reversed. And they’re now in a strong uptrend.

“It’s been a record year for Brazilian stocks. The country’s benchmark Ibovespa Index (“IBOV”) is up 78% this year in U.S.-dollar terms.

“That makes it the world’s best-performing major stock market for 2016. But we could see further gains, based on history.

“Despite major ups and downs, the Brazilian stock market has performed well since the early 1990s. The country’s typical annual gain has been 9.1%. But buying after a breakout led to much better gains.

“There are more people alive now than there have ever been,” writes Karim Rahemtulla for Nondollarreport.com. “With the current global population growth rate at roughly 1.2%, there will be 9.7 billion people on the planet in 2050.

“People need to eat. This is something any globally minded investor should always remember. Both China and India are experiencing population ‘enrichment’ as well as growth. India alone is expected to see a 16% jump in population from 2015 to 2030.

“With strong future demand trends from major population centers like China and India, and cheap potash (a salt used to fertilize soil) and fertilizer prices that are about to rise, potash and fertilizer producers are poised to outperform in the months and years ahead.”

IL’s Currency Corner: The Easy Way to Play The Loonie

Investors are getting a second chance to buy the Canadian dollar.

The Canadian dollar, also known as the “loonie,” is in the midst of a sell-off. This is what second chances look like. They are deep corrections that halt a bull market in its tracks…temporarily.

As a “resource currency,” the Canadian dollar tends to move in sync with commodity prices. But during the latter part of 2016, that hasn’t happened. The loonie has dropped 4% against the dollar, even though the CRB index of commodity prices has advanced 5% and the oil price has soared 15%. These divergent trends seem unlikely to continue.

As crude oil and most other commodities continue rebounding the Canadian dollar is likely to follow suit.

Buying the Canadian Dollar ETF at today’s relatively depressed level looks like a second chance that is more likely to produce delight than remorse.