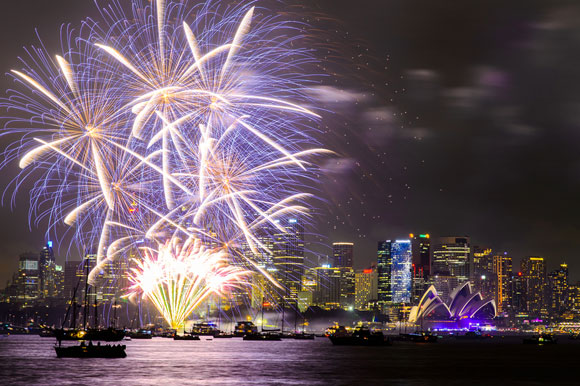 Because of its time-zone, Sydney, Australia is the first major city to get the New Year’s party going. ©iStock.com/Siwawut

The holiday season is usually devoted to celebration and cheer. But in Edinburgh, Scotland this New Year’s Eve, keeping evil spirits at bay is also on the agenda. That’s what Hogmaney is all about. It’s a friendly, inclusive twist on an old pagan tradition. Torches of fire are borne through the streets to ward off dark forces that emerge at this time of year. Large fireballs swung around on metal poles are reserved for the more stubborn spirits. Hogmaney today is more about enjoying yourself than anything else, with the festivities concluding with a hearty rendition of “Auld Lang Syne.”

Parades of a different sort are the order of the day in Nassau, capital of the Bahamas. This is where the famous Junkanoo parades take place, one on St. Stephen’s Day (December 26) before the main event on New Year’s Day. Like Hogmaney, Junkanoo also has historical roots. It dates to a time when slaves decorated themselves with whatever they could spare to embrace the year ahead. Thankfully, those days are long gone, and the Junkanoo parades have blossomed into a far more colourful celebration. You’ll see intricate costumes—painted in shades of orange, red, yellow, and blue and crowned with the plumes of tropical birds—which have been prepared over the previous year. Different dancing troupes compete to outdo each other, only adding to the spectacle.

Given their strong Catholic heritage, Nicaraguans love Christmas. But December 25 isn’t the only time of the month when they like to celebrate. You’ll find this out yourself if you’re in any Nicaraguan town or city on December 7. It all kicks off around 6 p.m. First you’ll hear a voice shouting from the church or cathedral: “¿Quien causa tanta alegría?” (“what causes so much happiness?”) And then the response: “¡La Concepción de María!” (“Mary’s conception!”) That’s when the festivities for which La Griteria (“The Shouting”) is known begin. The event celebrates the Immaculate Conception, and varies depending on what part of Nicaragua you’re in. In the colonial city of Granada, makeshift altars and processions parade through the street, while in the town of Nandaime, ox-drawn carts are at the center of the spectacle. Expect lots of fireworks wherever you are in the country.

The tiny Mediterranean country of Montenegro benefits from warm weather throughout the year. Even in December, you can get out and about. And you’ll have an excuse to in the coastal town of Bar this December, as Maslinijada returns to town. Olives are a crucial part of this area’s economy, and Maslinijada welcomes the harvest with a celebration of all things olive. You can browse colorful stands and taste the cream of the local crop, as well as delicious local donuts, pies, cheese, cakes, and honey. The Mediterranean climate here nurtures grapes as well as olives, so it should come as no surprise that wine is on hand, too. After sampling a glass of the local vintage, why not enjoy sunset over the Med, with a stroll along one of the 20 beaches that dot the Bar Riviera?

If you’d rather embrace 2017 with a bang, there are few better places to do it than Sydney, Australia. After all, Sydney is the first major city in the world where the clock strikes midnight. But far more important is the spectacle. Here you’ll enjoy the largest fireworks display on earth, with over 1 million people gathering in Sydney Harbor to watch. The iconic opera house makes a fantastic setting, as more than 50 illuminated boats float by beneath a sky set alight by booming, sparkling fireworks. Not to be missed is the Aboriginal smoking ceremony, to cleanse the city of bad spirits for the year to come.