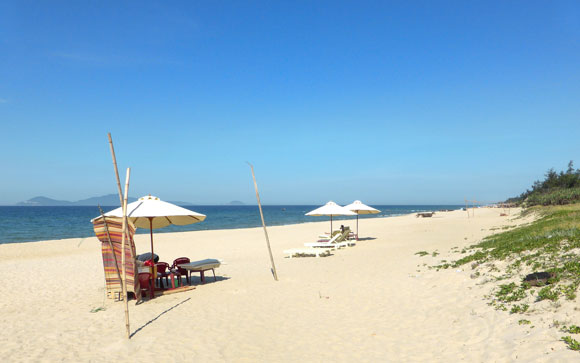 From Hoi An (above) to Da Nang you’ll ﬁnd 20 miles of stunning beach. You can find low-cost rentals in either location. ©Eoin Bassett

My husband David and I rent a lot of house for $630 a month. It’s a 2,690-square-foot place that came fully furnished, including a washing machine, heating, and air conditioning.

It’s a typical Vietnamese house, tucked back in a quiet little alley off the main road, shoulder to shoulder with our neighbors’ houses. It’s five stories high, with just one room on each floor. We have a foyer for parking and a large kitchen and dining area on the ground level, followed by a combination living room and office on the second floor. There are large bedrooms on both the third and fourth floors, and a storage area and balcony on the top level. Each bedroom has a full bathroom, and there is a half-bathroom on the ground floor.

David and I have lived in Vietnam for the last five years; for the past three years, we have lived in a great neighborhood not far from Hanoi’s city center. Whenever we go out, the neighborhood children greet us happily. “Hello!” they say. “I love you!” Their parents smile, not only at their kids but at us, too. We are the only Westerners in our little community, but we have never been made to feel like outsiders. It’s a delightful place to live.

Most people who choose to stay long-term in Vietnam rent an apartment or a house like ours. It’s now possible to buy a home in Vietnam, but the laws are restrictive, which can make both buying and selling a house complicated. Rents are low and housing standards tend to be quite high, giving you good value for your money.

The easiest way to locate a rental is to use a property management company. You’ll find these in all major cities and most towns in Vietnam. Agents are usually paid by the property owners rather than the tenant, and most agents speak at least some English. The property agent will show you all the rentals they have on offer that meet your criteria. That way, you can see what’s available in the least amount of time with minimum hassle. If you rent a place using a property manager, the lease will commonly be bilingual, with side-by-side terms in both Vietnamese and in English.

Alternatively, you can take the search into your own hands. Look for signs posted with the words “nhà chothuê,” which means “house for rent,” or “phòng cho thuê,” which means “room for rent,” in Vietnamese. Network with the people you meet, both expat and local, and scour the online listings. This works well in smaller towns such as Dalat, which don’t have any property management companies. If you find a place on your own this way, you may need an interpreter to negotiate the deal.

I know of one fellow who offered a small “finder’s fee” to anyone who could find him a good lead on a house for rent. He offered a $50 bonus to the person whose referral led to the house he finally picked. He was quickly flooded with tips from locals who were eager to earn a little extra money, and was able to rent a perfect house in just a few days.

Many landlords prefer to receive their rent on a quarterly or even an annual basis. They also prefer that tenants commit to a six- or 12-month lease, with a one-month security deposit. Finding a landlord who will accept a short-term lease can be difficult, but many short-timers find that renting a room or a serviced apartment, though it may cost a bit more, is still an improvement over staying in a hotel.

The city of Hanoi has a large foreign community and is renowned for its French-colonial architecture and its many trees, parks, and lakes. You should have no problem finding a comfortable, furnished, one-bedroom apartment or house in a good location starting at around $450 a month. Bear in mind, though, that electricity costs will be high during the cold winter months, when you’ll need heating, as well as in the summer, when air conditioning is a must.

Viet Long Housing has many listings in Hanoi. A one-bedroom, furnished, serviced apartment in cosmopolitan, tree-lined Ba Dinh District is renting for $503. It includes pay TV, internet, and housekeeping.

The neighboring cities of Da Nang and Hoi An, on the central coast between Hanoi and Ho Chi Minh City, are less expensive. Though prone to tropical storms in autumn, they benefit from cool winters and warm summers. Houses in either city start at around $400 a month. There is little need for heating during the winter, and during the hot months, a fan is enough most days.

There are only a few apartments in Hoi An—most rentals are private homes. In Da Nang, however, you’ll have a selection of houses and apartments, with apartments usually costing a bit more. Central Vietnam Realty is an excellent source for house and apartment rentals. A good example is a one-bedroom, furnished apartment across the street from the pretty Han River and just minutes from the beach. The rent is $553 a month. Nha Toi Real Estate also has some lovely properties available, including a one-bedroom furnished house that lists for just $400 a month and includes internet, weekly housekeeping, and a view of the peaceful Thu Bon River.

In Vietnam’s smaller cities and towns, you’ll find less expensive rent and overall living expenses. I lived for a year in a 645-square-foot, one-bedroom, serviced apartment in the coastal resort city of Nha Trang, about 180 miles north of Ho Chi Minh City. I paid only $350 a month, including weekly housekeeping, pay TV, water, high-speed internet, and 24-hour security. It was in a great neighborhood, near some wonderful restaurants and just a five-minute walk from the beach. A similar serviced apartment is advertised on Nha Trang Apartments. This one-bedroom furnished apartment is within easy walking distance of the beach. The $450 monthly rent includes a balcony and barbecue area.

Ho Chi Minh City, formerly known as Saigon, is Vietnam’s largest city and also the most expensive place to rent. A one-bedroom apartment with a one-year lease in the heart of the city averages around $650 a month. However, thousands of expats still live very affordably here. The high rents are partly offset by savings in other areas; groceries, public transport, and utilities tend to be less expensive than elsewhere in the country. Here you’ll also find the greatest selection of eateries anywhere in Vietnam.

VN Renting has one-bedroom apartments in popular expat Districts 1 and 2 starting at less than $450 a month. Among them is a furnished, one-bedroom, serviced apartment. The $700 monthly rent includes pay TV, internet, housecleaning, linen service five times a week, and access to the on-site swimming pool and gym.

Most properties for rent to Westerners come fully furnished. Utilities are typically not included in the monthly rent, especially in the case of private homes. Your rental property agent or the building owner will help you make any arrangements. Most likely, electricity will remain in the owner’s name, but you’ll need to pay the bill. However, the bill does not come in the mail. Instead, someone will come to your door once a month and present you with an invoice for electricity, water, pay TV, or internet. Each utility has its own bill collector, and you pay them the full invoice amount on the spot. If you don’t have the cash on hand, they’ll return in a day or two—but you don’t want to let it go for long, as service will shut off after they have made a few unsuccessful attempts. Payment is always in cash—checks are not used in Vietnam.

If you pay your electricity bill directly to the landlord, which is often the case with apartments, you will get an invoice at the agreed-upon price per kilowatt-hour. This may be considerably higher than what the electricity company would charge if you were paying it directly. It’s worth your while to clarify how the rate will be calculated and have it included in your lease. You can sometimes negotiate a more favorable rate from a landlord.

Although rents are often quoted in dollars, Vietnamese law states that, except for hotels, rent is to be paid in Vietnamese dong. A lease, to be legal, should have the rental price listed in dong. However, some landlords insist on using a dollar amount on the lease, which you can pay in dong, but possibly at an unfavorable exchange rate. The preferred currency and rate of exchange are something that can (and should be) negotiated before signing a lease. ATMs in Vietnam do not dispense dollars, so paying in dong is much more convenient.

Not all houses and apartments offered for rent in Vietnam are available to foreigners, as foreigner-approved units must meet a few minimum standards: Housing must include fire extinguishers and have adequate plumbing and electrical systems. If you use a property management company, this shouldn’t be a problem, as the house will have met these standards. However, a private owner may need to first certify their house with the government.

To confirm that you can legally rent a place directly through a private owner, ask to see the fire certificate issued by the fire department, the security certificate issued by the police, and the “Red Book,” which proves that the landlord is the legal owner of the property. Even though the house’s certification is the owner’s sole responsibility, you run the risk of being evicted by the police if you move into an uncertified house. You could lose your rent and security deposit, as well. Once the lease is signed, the owner will need to have it notarized.