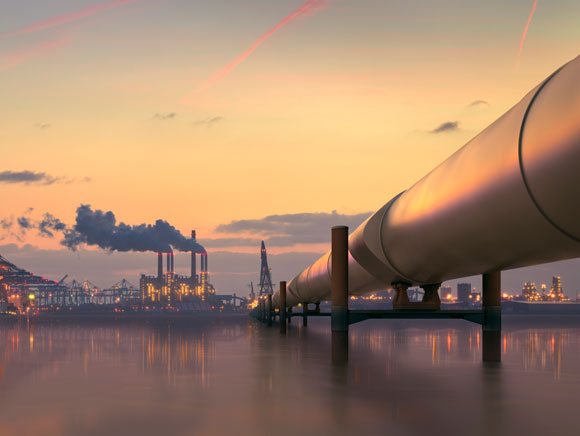 Demand for oil is growing at about 1% a year while reserves diminish. Demand pressures will force prices higher in the future, which makes it a sector worthy of attention today. ©iStock.com/Michal Krakowiac

I’ve been around oil (at least from an investor’s perspective) for a long time. In the early 90s I worked in the Dallas bureau of the Wall Street Journal, writing about oil and its impact on the Texas economy from an economic and investment point of view. I was in the middle of the depression, learning about oil at the feet of some of Texas’s greatest oil investors, as the industry muddled through years of despair.

We’re now back to a similar level of despair, since investment in the oil patch has crashed and new oil discoveries are at their lowest levels since the early 1950s.

The world is moving with great haste toward an alternative-energy future. But that future remains decades away from meaningfully reducing global demand for petroleum and its byproducts. And oil prices will see sharply higher levels before that future arrives—likely north of $100 a barrel again. It certainly may be the last time oil spikes so meaningfully, but it will spike, nevertheless.

The calculus of supply and demand says so. In that spike is your chance to earn triple-digit gains. If I’m wrong about the spike, well…even then, you’re looking at respectable returns of 30% to 50%.

Back in the 90s, when oil fell into a funk, energy companies the world over curtailed their search for new sources of hydrocarbon wealth. After all, poking holes in the ground is expensive. And they’re often a complete waste of money when the only commodities uncovered are sand, rocks, and water.

And if the quest is successful…well, then the real expenses begin, as companies build out the infrastructure and hire the manpower needed to pump oil from beneath the earth.

When oil prices are weak, those expenses are pointless. Why shell out, for instance, $50 a barrel to find oil, yet earn only $15 or $20 a barrel after bringing it to the surface? Spending money to lose money is not an economically viable business model.

So oil exploration companies in the 90s simply called off the hunt. Amid depressed prices, they found no cause to prospect for new reserves, focusing instead on producing the lower-cost reserves they’d found years earlier.

Oil reserves are a declining resource. Every drop removed reduces the asset that remains. At some point, an oil field is so depleted that it’s no longer viable, and into the trash bin it goes.

In a normal world, an oil-production company would shutter the depleted field, move on to a newly discovered reserve, and begin the years-long process of depleting that resource. 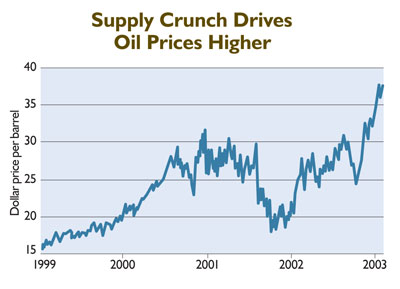 That quick, early price rise that began in 1999 was a function of the most basic supply-demand calculus, which suddenly found itself seriously out of whack. With each barrel produced, production companies were systematically shrinking the supply of oil…with no new reserves coming online.

And demand for oil was not abating. Throughout the worst of the oil-price slump, demand was still growing at about 1% a year, every year.

By early 1999, demand had caught up with—and was promising to exceed—supply. Worse, production companies for years had not been investing in finding new fields. Since finding and developing an oil field requires several years of permitting and construction, the oil markets realized that supply had no way to quickly ramp up to meet the continually expanding demand.

Events in the last two years tell me that a similarly explosive rise in oil prices lurks in the foreseeable future.

Based on a global analysis, Scottish energy research and consulting firm Wood Mackenzie now calculates that E&P companies will axe $1 trillion in investment spending between 2015 and 2020. Those cuts are taking place in almost every oil-producing country on the planet, and it means that new oil discoveries are at levels last seen in the 1950s—when the global population was just one-third of today’s level.

I realize $1 trillion is a meaningless number to the human mind. It’s so large, and the global oil industry is so gargantuan, that none of us has any contextual understanding. Let me put it in context…

A $1 trillion trim in exploring for and developing new oil reserves means a reduction of about 5 million barrels a day this year, widening by an additional million or so barrels next year. The world produces about 96 million barrels a day, so we’re talking about a production decline equal to about 5% of the world’s daily production. That is a significant amount.

Right now, the production declines that have already occurred mean that world supply currently exceeds world demand by about 300,000 barrels a day. That oversupply—along with spare capacity of about 1.7 million barrels a day and above-ground storage that has built up during the price slump—naturally keeps oil prices weak. That’s because plentiful supply exists to meet demand. For now.

But demand consistently grows at about 1% a year on average, despite advances in green technology. As existing reserves dwindle and older reserves peter out, with new fields not productive enough to replace them, while spare capacity and above-ground supplies ultimately evaporate, demand pressures will force oil prices higher. And the pending price rise will happen at breakneck speed.

A) the cost of finding new reserves is increasingly expensive, and

B) the fields that E&P companies are finding nowadays are not nearly as productive as the older fields now in production.

E&P companies have tapped all the easy-to-find/cheap-to-produce oil. What remains are the hard-to-find/expensive-to-produce fields. That means that, once demand passes supply, production companies will have to pay higher costs to find and produce the last barrel of oil the world needs—the so-called marginal barrel. And that marginal barrel is always the most expensive barrel.

As if the cost of finding and producing oil weren’t challenging enough already, oil companies are also struggling to find new reserves of meaningful size and capacity. Wood Mackenzie did a survey of more than 7,000 global oil fields found since the turn of the millennium. It found that the volume of oil and gas discovered has decreased by more than half, compared to previous finds, and that fields are producing less than originally anticipated.

Such statistics imply that, despite technological advances like fracking, the industry will soon reach a point when it will face the Red Queen’s dilemma. The term is taken from an exchange in Lewis Carroll’s Through the Looking-Glass, in which the Red Queen tells Alice, “It takes all the running you can do to keep in the same place.”

At some point, as this scenario begins to play out across 2017 and beyond, the oil market will recognize the dilemma we all face—that demand will ultimately outstrip supply and E&P companies’ ability to bring on new reserves quickly. As in the late 90s, the approaching dilemma will again usher in salad days for oil field services companies that supply E&P firms with all the materials and services they need to find and produce oil.

Editor’s Note: As a lifelong world traveler, Jeff D. Opdyke has been investing directly in the international markets since 1995, making him one of the true pioneers of foreign trading. He is investment director for The Sovereign Society and the editor of Total Wealth Insider, The Sovereign Society’s exclusive monthly research newsletter.

I like what few others are paying attention to. Opportunities hide there.

I bought oil stocks in the late 90s when the world couldn’t care less about $15 crude. I bought McDonald’s at $18 in 2002 when the Street seemed certain the Golden Arches were out of step with the times. Both moves panned out well. Russia is my contrarian move today.

The consensus insists that an investment in Russia is ill-advised. It’s an oligarchy. It has dangerous, imperialist ambitions. It’s run by a dictator-by-another-name. The political and economic system is rigged. The economy is screwed. The list goes on.

Some of that’s true. Most of it is Western hyperbole. I was in Russia this past summer. The situation isn’t dire. The economy isn’t in shambles. Tourists still crowd Red Square. Café Pushkin still serves the best stroganoff ever. Russians are living their lives, and life goes on largely normally.

Russia represents an opportunity because the value of Russian assets—particularly stocks and the local currency—are mispriced. I’m buying the Russian ruble. The currency is undervalued today, and it, too, will rise sharply once the sanctions lift.