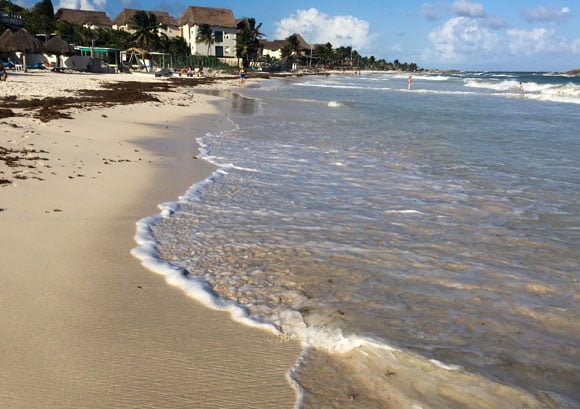 The stunning beaches of the Riviera Maya attract visitors from around the world, guaranteeing strong rental returns if you invest in property here. ©Brendan White

The breeze carried the salty tang of the turquoise ocean. The sand was white and powder-soft. Yet I was one of the only people on the beach.

The year was 2004. I was on the Riviera Maya, Mexico’s Caribbean coast, on Tulúm Beach. I’d been told it was something special—like paradise. I was skeptical. That word gets thrown around a lot. But I decided to check it out. I’d flown into an international airport. That was the easy part. The drive to get to this beach was the hard part. I turned off the main highway and it turned into dirt roads. The journey was uncomfortable and slow-going at times. But paradise was the right word to describe this place.

I knew then that I was onto something special: an opportunity to get in before values took off. Progress was coming. And it did… In the years that have followed, subscribers of my Real Estate Trend Alert service have been able to profit from that growth trend. Members banked some serious gains. Like, for example, the opportunity to lock down a condo in the heart of chic Playa del Carmen for $136,500. Three years later, one of those condos now lists for $189,000. And rental yields are strong. One owner of a two-bedroom condo grossed $10,000 in rental yields in the first four months of 2016 alone.

Right now, you have the opportunity to buy condos a short drive from the beach I stood on in 2004. The Path of Progress that has been steaming down the Riviera Maya for 12 years ends at this beach. Beyond it, the land is protected. That means there has been surging demand coming up against a limit on the land available for development. And that combination leads to profit.

An Opportunity 50 Years in the Making

The seeds of opportunity on the Riviera Maya were planted five decades ago—on the back of a recession. In the 1960s, Mexico suffered an economic crisis. So the government figured it needed new ways to generate revenue. It decided to grow the country’s tourism industry.

In 1968, it set up a new government agency to promote and stimulate tourism development and growth. This was no small project. The country’s president called in the big guns to get it off the ground—including the country’s central bank. It committed funds to putting in infrastructure, financing hotels, and building an international airport.

If you want an example of how fast bureaucracy can move when it’s motivated, this is it. There were no committees humming and hawing for months on end, only to get nowhere. It was the start of a Path of Progress steamroller that kept picking up speed. From the time the plan was announced in 1968 to the opening of the first hotels in Cancún, only six years passed.

The airport was the key to Cancún’s success. It’s easy today to take international travel for granted. You can book a flight from your phone and shop around to get lower-cost flights online. In the early 1970s, air travel was for the mega-rich only—people with money to spend. But the middle classes were starting to follow their lead. More and more people were looking to vacation abroad.

Cancún’s international airport opened in 1974. It opened up Cancún to a new market of North American vacationers. And their numbers grew rapidly year over year. The first four hotels were completed in 1974. By 1975, Cancún had already welcomed almost 100,000 guests.

Those investors who acted then are sitting pretty now. Cancún is a success story. Almost 5 million tourists visited the city last year. Hotel occupancy rates are among the best in the country. The city saw an occupancy rate of 82% in 2015, and numbers are set to rise again this year.

The opportunity to do well by buying low in Cancún has passed. The opportunity today comes a little farther down the coast. Here you have the chance to get in before this Path of Progress story plays out—and to lock down some of the strongest capital appreciation and rental incomes on my beat.

The Mexican government could have decided after Cancún that it was a job well done, and left it at that. But it wasn’t content with Cancún’s success. It looked down the coast and figured it could make as big a success of this Caribbean coastline as it had of Cancún.

Twenty-five years ago Playa del Carmen was a little fishing village. It was dwarfed in size and population by Cancún. But the government built a new highway in the early 1990s that linked Cancún with Playa and Tulúm. For Playa, this triggered a wave of development. Paved roads replaced packed sand. New stores, eateries, and boutique hotels opened up. Playa quickly became one of the fastest-growing cities in the Americas.

Tourists come year-round. In greater numbers than ever before. And Playa is developing into a cosmopolitan city. It’s set to become one of those internationalized places that attracts mobile people, their ideas, and their capital from around the world. Entrepreneurs from all over Latin America and Europe are setting up shop in Playa.

The Path of Progress rolled down the coast from Cancún to Playa del Carmen. And it’s moving beyond Playa to Tulúm…

The Next Big Play on the Riviera Maya

When I wiggled my toes in the sands of Tulúm Beach 12 years ago, it had a few little hotels, guesthouses, and eateries. No one really knew it was here. Most people flew into Cancún and never gave a second thought to what lay beyond that city.

But then the Riviera Maya started to take off. As more people started to come, they ventured farther down the coast. Tulúm started to grow its reputation, based on word of mouth. The fashion set and the jet set started to catch on. The hippy vibe appealed strongly to that crowd. If you were interested in a high-end wellness retreat, they told each other, Tulúm was where you should go.

Now it’s a destination, splashed on the pages of The New York Times and Forbes as a hipster paradise. Stars like Leonardo di Caprio and Demi Moore have been pictured on the beach.

More hotels are being built. But not fast enough. And peak season is getting longer. Traditionally, peak season ran from late November to March. Now it feels like it runs from November to May. Then Europeans start to come over the summer.

That’s put Tulúm, in recent years, on a fast-growth trajectory. Its population was only 6,733 in the year 2000. By 2010, it reached 18,233. New businesses are opening up—banks, supermarkets, hotels, and restaurants. Today it’s still growing strongly. But development is more restricted here, thanks to the nearby Sian Ka’an Biosphere. Plus, much of the beachfront land here isn’t titled. There’s a limit to how much can be built in Tulúm.

The latest opportunity I’ve found lies about 15 minutes up the road from Tulúm, in what I call the “golden zone.” That golden zone is nestled between chic Tulúm and the city of Playa. In that golden zone you’re within a short drive of everything that’s in Playa and also the Tulúm beaches. And you’re just over an hour from Cancún’s international airport. It’s got cross appeal to vacationers, snowbirds, and professionals.

You’ll be in a prime position to lock down strong capital appreciation by buying right and to benefit from strong rental income.

The Riviera Maya is just one spot on Ronan’s beat where he scouts out the best opportunities and negotiates the best deals for subscribers of his Real Estate Trend Alert service. Ronan spends two weeks out of every month traveling the world in search of the best real estate deals.

So far this year (at time of writing), Brazil’s stock market has rebounded upward by almost 35%, in local currency. And, in dollar terms, the return for many is even greater thanks to the strengthening of the dollar against the real, Brazil’s currency.

Like I say, I don’t know stocks. But I do know real estate. And I’m telling you that now is the time to buy in Northeast Brazil. Right now, you can still lock down real estate at bargain-basement pricing. And, as the real estate market recovers to where I expect it to be, you can see strong capital appreciation on those bargain-basement buys.

If you want to lock one down before other investors start circling back, you have to get a move on.