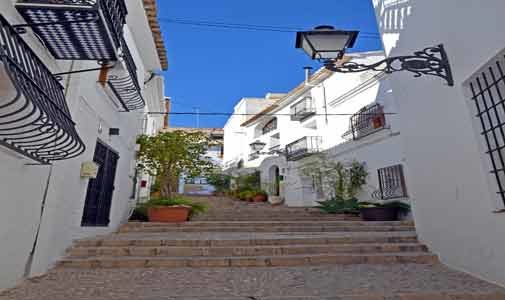 Sublime light and affordable living has drawn artists to Altea for generations, and you can rent there from $450 a month.©iStock.com/Gert4u

Wafts of salt and sea mix with the delicate scent of orange blossom; it’s springtime in Altea, the hidden jewel of Spain’s Costa Blanca (White Coast).

The sun gently soothes the tingle of a cool breeze whispering off the Mediterranean Sea. As I walk along the seashore, a rhythmic melody swells and falls as the waves strum smooth pebbles in their wake. On the edge of town, the billowing bamboo and cattails of the Algar estuary protect throngs of swans, geese, and ducks. It’s hard not to love Altea.

As Maryanne Parnell, an expat in the pueblo for almost six years, says, “In Altea we are spoiled for choice, with mountains behind us and the sea in front, every type of shop, bar, and restaurant you could need, but still plenty of charm and a Spanish soul.”

The tranquil Mediterranean welcomes my dog Charlie and me each serene morning for our brisk walk. The sun is just peaking beyond the horizon, and the outcrop of rock, Peñón de Ifach, at over 1,000 feet high, provides a dramatic element I never tire of. Our stroll isn’t complete without a morning café con leche (coffee with milk) and pan con tomate (bread with tomato). The tomato is squeezed onto the bread rather than sliced; the result is rounded off with a drizzle of local olive oil and light flakes of salt. Traditional and fresh, just like Altea. With the sun over the horizon, I can’t think of anywhere else I’d rather be.

Altea offers a warm Mediterranean microclimate coupled with a sublime quality of light. Located on Spain’s eastern coast, 45 miles north of Alicante, it nestles at the foot of the Sierra de Bernia Mountains, with the Sierra Helada promontory to the south. Its special light has attracted a diverse and celebrated art culture, which in turn has attracted a well-respected art university, the Miguel Hernández.

Diversity is a local theme, as Altea is about two-thirds local and the remaining third a mix of international expats. A high-spirited babel of languages fills the old-town favorite AlteArte on Thursday nights for the bar’s Language Exchange.

The focus during this hour is learning Spanish and English, but in doing so I find out about everything from local customs to helpful information. It’s a great way to make new friends while sipping a Spanish beer, wine, or AlteArte’s excellent mojito.

I always find a lively social ambience, engaging with locals and expats alike. And you never know who else you might meet. For my part, I met and married one particular local Alteana named Cristina.

Altea is home to a diversity of expats partly due to its medieval charm. A walk up to the whitewashed old town pinnacle, sauntering through narrow cobblestone streets lined with blooms and vines, takes me back in time. Geraniums and wisteria exude their fragrances, while friendly chatter provides the ambience.

The reward for reaching this summit is a view that spans the surrounding mountains inland to the crag-lined sea in front.

The town’s turbulent history is marked by the influences of Iberians, Greeks, Phoenicians, Romans, and Arabs. The name Altea comes either from the ancient Greek “Althaia,” meaning “healing,” or from “Altaya,” meaning “stone over the sand.” It was once a fortress of stone walls interspersed with lookout towers and high-arched gates. In times of danger, locals used to scramble inside these great walls for protection. Today, we flock to the old town on top of the towering rock dome for much more civilized reasons: namely, food, fun, and festivals.

Altea’s restaurants and bars run the gamut of cuisine. For most of the year, you can eat on an outdoor terrace, often with sea views. Try an authentic Valencian paella born of the region at the exclusive L’Airet d’Altea. The saffron-colored rice dish is served in its traditional round shallow pan for $12.41 to $18.61 per person. I highly recommend arroz del senyoret (“gentleman’s rice”), a traditional seafood paella with the shells removed for the gentlemen…and ladies.

Shift your gastro gears for gourmet tapas by Xef Pirata in the form of a superb seven-course tasting menu for local high-end prices of $28.50.

For less daunting fare, the highest rated pizza in town is at El Castell, or you could indulge in the undisputed best curry at Crown of India. Each ranges from $12.41 to $18.61.

Much of Spain’s bucolic charm, and especially Altea’s, comes from the centuries-old tradition of market days. Local farmers and producers gather on a cordoned-off central street from daybreak until about 1 p.m. to sell fruit, vegetables, olives, honey, nuts, and flowers. I don’t see many horse carts any more, but what remains constant over the centuries are the free samples as a testament to quality, the playful banter between town and country folk, and the shouts of special offers cracking the buzz. More than once I’ve lost myself in that repartee and ended up with more than I’d intended. It’s just a reason for another dinner party.

Luckily for me, the prices on market days are a real bargain.

Prices are about half what they are in the U.S., and the quality is excellent. I can’t help but come home laden with vegetables, fish, and fruit. Orange juice squeezed to order is the norm, here and across the region. You can see why, when you spy the citrus groves filling the nearby countryside.

The níspero (loquat) grows in abundance, too, and it’s one of the many traditional treats available in springtime. I eat them fresh off the tree or as jarred preserves, jam, honey, and even as an ingredient in beer. Or I make up my own version, like níspero-habanero jelly, using habaneros from my own urban eco garden, which I signed up for three years ago.

I pay $40 a year for the water, which is rigged for automatic irrigation using some free lines provided by the city hall.

The fresh produce is not all that’s affordable in Altea. Apartment rentals start at only $450, even in the coveted old town or on the seafront.

I first rented my 1,000-square-foot, two-bedroom, onebathroom apartment on Altea’s seafront for $450 a month. A little later, my wife and I ended up buying it. When I sit on my living room sofa, I can see only the sea, just as though I were on a cruise ship. The sea ushers in the cool breezes with a swing of the balcony door. Depending on location, something similar could cost anywhere from three to six times the price in the U.S.

Utilities average less than $100 a month in total, as the mild temperatures mean less energy consumption.

Real estate for sale, though not as dramatically low-priced as rentals, is still a huge bargain compared to even the cities with the lowest cost of living in the U.S. In the old town or on the seafront, prices for a standard two-bedroom, one-bathroom property start at $124,000, which is a pretty good deal for southern European beach living. If you have a higher budget, the options are much more varied. In the old town, high-end homes rarely come on the market. On the seafront there are properties for sale, but they usually start at over $500,000. There’s rarely any need for heating in winter, or air conditioning in summer.’

And Spain’s healthcare is excellent. It’s seventh in the world, according to the World Health Organization. U.S. and Canadian citizens getting residence in Spain will generally need to have private health insurance. If you’re in decent health and between 55 and 65 years of age, expect to pay roughly $110 to $160 a month for private health insurance.

Like anywhere in Spain, the whole town gets periodically involved in large-scale local celebrations that are frequent, varied, and always musical. In fact, music is a tradition that runs so deep that Altea, with a population of only 23,000, boasts a very talented 160-piece orchestra that you can enjoy monthly at the local 400-seat Palau Altea (Altea Palace). They also play at various outdoor venues in the spring, summer, and fall.

Tram, Train, and Taxi: How to Get to and Around Altea

When it comes time to explore the area around Altea, one transport option stands out head and shoulders above the rest. A tram runs up and down the coast from Denia, 27 miles to the north, to Alicante, 35 miles to the south. You can get to either one from Altea, or vice versa, for about $5.

Those 62 miles of coastline feature a string of connected towns and villages, each with something special, each worth a visit.

Long-distance trains run from Alicante and connect to the whole of Europe. Townsponsored bike rental systems with multiple pick up/drop off stations are standard in most locales upon arrival, but you’ll find most Spanish towns are easily walkable.

For harder-to-reach areas inland or in the mountains, there are buses with flexible schedules. And, if you have the means, taxis are plentiful throughout.

For longer journeys, there’s an international airport in Alicante, and another 87 miles north in Valencia. A two-hour flight can put you all over western Europe or most of North Africa, specifically neighboring Morocco.