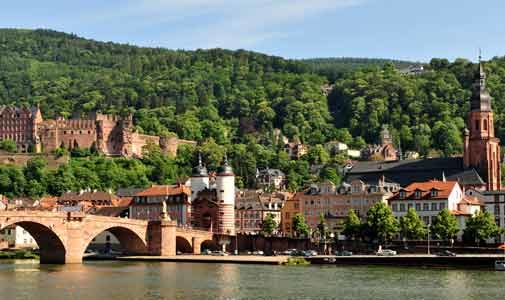 Night has fallen in Heidelberg. The hills cradling the city are a silhouette. The twinkling lights of the Old Town reflect on the Neckar River. Partygoers clink wine glasses on the balconies of elegant villas.

The city has been casting a spell on visitors for centuries. Legend has it that author Mark Twain overcame writer’s block in Heidelberg. English Romantic painter J. M. W. Turner also found inspiration in this southwestern German city. He painted dreamy depictions of the city’s vistas. General Dwight Eisenhower, by some accounts, was so bewitched that he planned to make Heidelberg an army headquarters once World War II ended. This could be the reason why the city was spared from Allied bombing raids.

Its romantic appeal aside, Heidelberg has much to offer in the way of attractions, culture, and history. Home to Germany’s oldest university, which was established in 1386, it’s sometimes compared to Oxford, England.

With approximately 38,000 students, Heidelberg has a youthful energy you can feel—especially as you explore the Altstadt (Old Town). University buildings nestle among beautifully preserved baroque townhouses. Inside cafés, students enjoy a Kaffeepause (coffee break) with a book and a steaming cup of coffee in hand. The prevalence of English, plus the great variety of restaurants and shops, are what you’d expect in a university town.

I also became enchanted with Heidelberg when I lived there for 10 years. My husband, Shawn, proposed to me on an elegant stone bench on the castle grounds. Later, on a snowy winter evening, we married inside the castle’s ornate chapel. After a decade of living there, I came to know the city well, regularly exploring its lesser known lanes and forested hiking trails.

Part of what makes Heidelberg so delightful is that its Altstadt is compact and easy to navigate on foot—the city has an overall population of just 150,000 or so. The Hauptstrasse is the Old Town’s main thoroughfare. This mile-long street is filled with restaurants, cafés, and shops, and it’s one of the longest pedestrianized streets in Europe. If you’re looking to get a bit off the beaten path, head to Untere Strasse, where you’ll find less touristy eateries and boutiques.

Heidelberg’s most popular attraction is its half-ruined castle, which was once the residence of the Prince Electors of the Palatinate. Clustered around the Old Town are Heidelberg’s other star sights. The 18th-century Old Bridge (Alte Brücke) is one of the most distinctive, with the dome towers of its medieval gate. Before you cross the arched bridge, keep your eyes open for a bronze monkey. Stroking its right hand is said to guarantee your return to Heidelberg.

The Student Prison (Studentenkarzer) is one of Heidelberg’s quirkier attractions. It has vintage graffiti adorning every inch of its walls. From 1778 until 1914, naughty university students—many of them fraternity members—were imprisoned here for minor infractions like excessive drinking, participating in duels, or insulting officials. Your $3.70 ticket to the prison will also grant entry to the Alte Aula, the Old University’s grandiose auditorium.

The Hotel zum Ritter St. Georg is one of Heidelberg’s oldest and most opulent buildings. The Renaissance beauty was built in 1592 and was one of the few buildings to survive Heidelberg’s 17th-century firestorms. Human figures, rams, and Renaissance motifs mingle on its magnificent facade. See: Hotel-ritter-heidelberg.com.

While Heidelberg has several handsome old churches in the Old Town core, the Church of the Holy Spirit (Heiliggeistkirche) is the most prominent. It was founded in 1398. For superb panoramic views of the city, climb to the top of the church’s tower. You’ll get a good glimpse of the knight’s statue adorning the Hotel Ritter’s magnificent gable.

After you’ve done a bit of wandering, stop by a nearby café and rest your feet. You’ll be spoiled for choice in Heidelberg. The Bäckerei und Konditorei Gundel whips up a divine apple strudel, while the Café Burkardt offers delightful daily specials. If the weather is pleasant, head to the Café Konditorei Schafheutle and enjoy a coffee and sweet treat on its flower-filled terrace or inside the enclosed sun porch.Each year, Heidelberg hosts a variety of special events.

They include everything from jazz and theatrical performances to food and film festivals. One of my favorites is the three-week Christmas Market (Weihnachtsmarkt). This winter event transforms Heidelberg’s Altstadt into a snow globe scene; the temporary village fills with shimmering lights and chalet-style huts selling food and trinkets.

Heidelberg has a lot to offer fans of the performing arts, too. The Castle Festival (Heidelberger Schlossfestspiele), which is held during the summer months, offers theater and music performances. Taking in a performance in the courtyard, with its Renaissance-era figurines watching over you, is a memorable experience. See: Heidelberg-marketing.de.

And I love Heidelberg’s array of dining options. As a cosmopolitan city with students and residents from around the world, Heidelberg offers you Italian eateries, kebab shops, Persian restaurants, and, of course, hearty German cuisine.

My pick for local comfort food is the Schnitzelhaus Alte Münz.

As the restaurant’s name implies, Schnitzel—a breaded and fried pork or chicken cutlet—is king here. With more than 100 varieties, the Schnitzelhaus doesn’t just serve the familiar version accompanied by a lemon wedge. Instead, you’ll find innovative dishes using mozzarella and sun-dried tomatoes, asparagus-cream sauce, and even dark chocolate. French fries and a salad drizzled with a tasty yogurt dressing are offered as accompaniments. Prices average $12.50. You can dine inside the Schnitzelhaus’s cozy, candlelit interior or on the cobblestone terrace outside. Reservations are recommended.

Vetter’s Alt Heidelberger Brauhaus is the perfect place to go if you seek a quintessential brewery experience. Inside, garlands of dried hops hang from chandeliers and are reflected in the brewery’s shiny copper vats. From lighter offerings to a dark wheat beer, or Hefeweizen, a liter of beer goes for $10.40.

The food at Vetter’s is filling. You can dine on everything from Nuremberg-style fried sausages (served with sauerkraut and dark bread on pewter plates) to roasted ham hock. My go-to dishes? Perch served with fried potatoes, or a plate of irresistible, cheesy egg dumplings called Käsespätzle. See: Brauhaus-vetter.de.

If the rich meals and pastries have you feeling that you need a bit of exercise, head to the Philosophers’ Walk (Philosophenweg).

The scenic path is named for the philosophers, poets, and professors who once strolled there. The most atmospheric way to access the Philosophenweg is via a steep walkway that’s largely paved with cobblestones. Cross the Old Bridge and the Neuenheimer Landstrasse. As you climb, you’ll pass ivy-adorned walls and vineyards. At the top, you’ll be rewarded with sweeping views of Heidelberg’s castle and Old Town.

To fully appreciate the ambience, pack a picnic and head up to watch the sunset at one of the viewing platforms or benches along the way.

As the sun begins to set, the city’s forest-carpeted hillsides take on a golden hue, and the pink sandstone of the castle ruins begins to blush. It becomes easy to see how hearts are drawn to Heidelberg.

Heidelberg’s central location makes it an excellent base from which to explore the region.

However, if you do go that route, be prepared for the high speeds! You may also want to check with your rental car company to see if it requires you to have an International Driving Permit.

Each of my three picks for day trips from Heidelberg is no more than 125 miles away. They include a journey through French wine country, a city break in cosmopolitan Strasbourg, France, and a getaway to Germany’s idyllic Black Forest.

A Day in French Wine Country

With its colorful half-timbered homes, extraordinary vineyard views, and fun and affordable wines, the Alsace Wine Route (Route des Vins d’Alsace), on France’s eastern border, is worth your attention. (See: Alsace-wine-route.com.) One must-see is the flower-filled town of Colmar. This so-called “Venice of Alsace” is also the birthplace of Fréderic-Auguste Bartholdi, the sculptor of the Statue of Liberty. In the village of Saint-Hippolyte, go wine tasting. At the Muller-Koeberlé Winery (see: Muller-koeberle.fr), you can purchase delightful bottles of Riesling or Pinot Gris for less than $10. Also swing by the Château du Haut-Kœnigsbourg, a medieval castle about five miles away. (See: Haut-koenigsbourg.fr.)

Strasbourg—just over the French border—offers a delightful mix of big city amenities and village charm. Its centre-ville boasts a magnificent Gothic cathedral (Cathédrale Notre-Dame de Strasbourg), which was once the world’s tallest building. There are also chic department stores, pretzel-filled taverns, and a multitude of museums. Stroll along the canals in the Petite France district, known for its half-timbered buildings and window boxes overflowing with red geraniums. Gliding down Strasbourg’s waterways in a glass boat is a relaxing way to see the city’s ﬁne buildings and covered bridges. (The boats leave from the pier near the Rohan Palace. See: Batorama.com.) Finally, feast upon tarte flambée. This traditional Alsatian dish initially brings to mind a thin-crust pizza, but the toppings are different. The classic version is made with strips of bacon, onions, and a blend of white cheese and cream. (See: Otstrasbourg.fr.)

With dense forests, cuckoo clock shops, and windows ﬁlled with tempting slices of Black Forest cherry cake, the Black Forest is a world away from the hustle and bustle of Germany’s big cities. But there’s much more to be appreciated here, including hiking circuits that will take you past Germany’s highest waterfalls (in the town of Triberg), or a day spent relaxing at a splendid spa in Baden-Baden. These thermal springs were originally appreciated by the Romans. (See: Blackforest-tourism.com.)