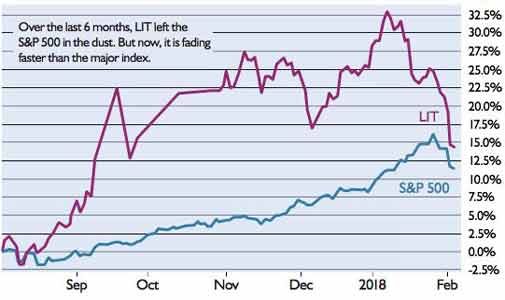 The past months have seen the market pig get introduced to the meat grinder, squealing all the way. And no industry got more ground up than lithium stocks. That hands you a great opportunity.

Let me show you a chart of the Global X Lithium & Battery Tech ETF (NYSE: LIT), a basket of leading lithium-leveraged stocks, to explain why.

The dip in the markets at the start of 2018 left lithium stocks deflated like an old party balloon. Yet this is despite the fact that the demand for lithium is getting hotter and hotter. One expert analysis says lithium demand should triple in the next few years.

And supply? Supply won’t keep up. It’s not even close.

Lithium is a leading part of the supercycle going on in energy metals. The energy market is undergoing a transformation the likes of which we haven’t seen since the early part of the 20th century when automobiles replaced horses.

This time around, it’s electric vehicles (EVs) taking up more of the road. They’re getting longer-ranged and cheaper at the same time. We are accelerating toward an EV future.

So, how do you play this? You could buy LIT now that it’s getting cheap again.

“We’ve heard a lot about the death of brick-and-mortar retail locations,” says Joseph Hargett of BanyanHill.com. But there is an important section of the retail market that Amazon will never own.

“‘You just can’t browse on Amazon, not like you do in a store,’ my wife once told me. ‘And you miss out on finding deals in bargain bins that you just can’t find online.’

“There is one company that has turned ‘bargain bin’ discovery shopping into a successful business model: TJX Companies Inc. (NYSE: TJX). TJX buys excess inventory in bulk directly from brand-name manufacturers, allowing it to pass those bulk savings along to customers.

“The model is working well. Sales are running strong; shares are also trading down more than 10% from its January highs.

“While this decline largely paces that of the broader market, remember that TJX stock is not an overhyped speculative or momentum play.

“The shares are on the verge of being oversold, making them a bargain at current levels. Because of this, now is a good time for investors to add TJX to their portfolio.”

“There are plenty of ways to measure market trends,” says Kim Iskyan of StansberryChurchouse.com, “but they don’t always look at the real world. So here’s a real-world index to pay attention to…

“The re-pat index: When I was recently in Bangladesh I met a lot of people who were originally from Bangladesh, but had left the country for many years—and then returned.

“Many of these people—senior executives at the country’s biggest conglomerates, heads of start-ups, and senior managers—left a good situation in a part of the world that’s a lot easier to live in.

“And why were they back? For one main reason: Opportunity. They could enjoy a respectable and comfortable life in the developed world…or take the opportunity to multiply their income in a wild and chaotic country, at a far higher level of responsibility, creating something new out of nothing.

“That these folks returned is a very positive sign for the country.

“The more re-pats, the better—the more things will improve. And the more opportunity for savvy investors to profit from.”

“Back in March 2015, I recommended cheap Russian stocks,” says Steve Marstrand of OfWealth.com. “The Russian stock market isn’t just cheap, but the country has a sound financial and economic situation. At the time I suggested the VanEck Vectors Russia Exchange Traded Fund (NYSE: RSX).

“That’s a great result over little more than two-and-a-half years. Especially given how out of favor Russian stocks remain.

“RSX is still OK, but nowadays I slightly prefer the iShares MSCI Russia Capped ETF (NYSE: ERUS). That’s because it seems to do a better job of passing through the dividends to investors.

“Russia remains the cheapest stock market in the world, despite great performance in the past couple of years. From this low level, and with the 5% dividend yield, it’s likely to deliver strong returns in the future too.

“Of course, it won’t happen in a straight line. Prices will jump up and down from time to time. But investors who buy cheap Russian stocks today, and tuck them away for the long run, are likely to do well. Just remember to reinvest those dividends.”

“U.S. President Donald Trump has taken a ‘Fortress America’ approach to global trade,” writes Kim Iskyan of StansberryChurchouse.com. “One of his ﬁrst acts as president was to pull the U.S. out of the Trans-Paciﬁc Partnership (TPP)—a 12-country trade deal that would encompass around 40% of total global output.

“With the U.S. retreating from globalization, the door is open for China to take the reins instead.

“The Regional Comprehensive Economic Partnership (RCEP) and the Free Trade Area of the Asia-Paciﬁc (FTAAP), could help bind Asia more tightly together—only with China, not the U.S., as the glue.

“And America’s shift inward will have other implications beyond trade. It also means that China’s efforts to deepen its political and economic inﬂuence throughout the world will be made all the easier.

“For example, China’s One Belt One Road (OBOR) initiative is a large-scale development and infrastructure programme announced by China in late 2013. Spanning the breadth of Asia into Europe, the OBOR initiative incorporates around 60 countries, which account for a third of global GDP and around 60% of the global population. OBOR is a way that China can cement its strategic interests across a huge swath of Africa, Central Asia and Eastern Europe at the same time.

“China says it will invest US$4 trillion into OBOR efforts.

“China is also seeking to make up for lost ground in technology by leading the charge on investment in new technology.

“Most of the world views China as a nation of copycats and counterfeits. But China accounts for 20% of all global research and development spending. That’s just second behind the U.S., with 26%.

“And when it comes to simply brute computing power, China remains the world leader. Since mid-2013, China has held claim to the world’s fastest supercomputer.

“These are just a few examples of the slow but inexorable shift of the global political and economic center, from west to east. And the looming U.S. trade war with China will likely only accelerate this shift.”

“Oil producers are going to have a great year in 2018,” writes Matt Badiali of BanyanHill.com. “We can too…if we buy shares soon. You see, most investors hate stocks of oil producers today. The steep fall of the last couple of years is still too fresh in their minds. However, the math is indisputable: Rising oil prices will make these companies a lot of money.

“Here’s the thing: Oil producers have leverage on the oil price. That means their proﬁt will go up much faster than the actual commodity price. That’s why we love to own producers in a bull market.

“Let’s say a company produces 1 million barrels of oil per quarter and it cost them $45 per barrel. When the price of oil is $50 per barrel, they make $5 per barrel in proﬁt. That’s $5 million per quarter in earnings.

“If the price of oil goes up to $70 per barrel, this same company makes $25 per barrel. Suddenly, their quarterly earnings go to $25 million. That’s an increase of 400% when the oil price goes up just 40%.

“That’s something to keep in mind as the U.S. dollar falls and the oil price rises. You could invest in the trend via an exchange-traded fund such as the SPDR S&P Oil & Gas Exploration and Production ETF (NYSE: XOP). Owning XOP today could result in a nice proﬁt over the next couple of months.”