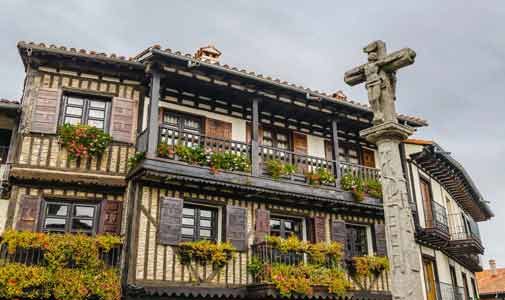 Staying in La Alberca, Spain, is a timeless experience worth paying for. Getting to stay there for free is even better.©iStock.com/Photitos

Last year I spent a week in the Spanish countryside. I strolled narrow cobblestone streets in a quaint medieval village. I learned to drink red wine from a bota (a goat-skin wine bag) and sampled renowned jamón bellota in a rustic bodega. As I savored the succulent, cured meat, I forged lasting friendships with fun, friendly Spanish people…and living that good life didn’t cost me a dime.

This year, I plan to snuggle into a small country inn in a Bavarian nature park, where I’ll quaff craft beer and nibble local cheese as I share warm laughter with new German friends. Or maybe I’ll spend a week in an 11th-century abbey in Tuscany, chatting about art with sophisticated Italians. For free. My only expense will be getting myself to the nearest city.

You, too, can have these experiences without spending a penny…all you have to do is speak English.

English immersion programs around Europe need native English-speaking volunteers to converse with speakers of other languages. In exchange for enjoying conversations with interesting, educated Europeans, you get four-star lodging, three gourmet meals a day, wine with lunch and dinner, local excursions, and cultural experiences.

I personally have volunteered in two programs in Spain: Pueblo Inglés and Estación Inglesa. I enjoyed them both.

Although the schedule is demanding at times, the activities are such fun that I never wanted to miss a minute. I talked a lot…and listened even more.

My adventure began at Casa Patas, an authentic flamenco venue and restaurant in Madrid. Here the Pueblo Inglés program directors hosted an introductory paella lunch for the English-speaking volunteers, followed by a private flamenco performance. The next morning, we met on a Madrid street, climbed on a bus, and began our first one-on-one conversations with nervous Spaniards. We changed partners when we stopped for a break in Ávila, where we had a perfect view of the astounding medieval walls, as wide as a tennis court and built of honey-colored granite.

After four hours of conversation, we arrived at the 15th-century village of La Alberca, in Castilla y León, the first village in Spain to be declared a National Heritage site. After we checked into our cozy casitas on the grounds of Abadía de los Templarios (Abbey of the Knights Templar), we sat down for lunch together. It would be the first of many meals where we enjoyed Spain’s marvelous gastronomy with Spanish friends who had a deep connection with this food and the culture of sobremesa (socializing after meals).

The Spaniards were mainly well-educated professionals who needed to improve their English to advance in their careers. But there were interesting exceptions, like an artistic high school girl with an interest in Japanese anime. We talked about families and work. I learned about how the recent economic crisis affected ordinary Spanish people.

I answered questions about the U.S.’s peculiar politics. Because I’m a retired Hollywood film professional, I connected with a Spanish actor looking to break into U.S. movies. We bonded over our tales from the cinematic trenches and are still in touch.

Every day began with 50-minute one-on-ones, so we ran out of superficial topics quickly. A couple of days in, we started sharing our deepest fears and heart’s desires with each other. Our days were full, because most activities were compulsory. However, we had two hours of free time every afternoon.

A highlight was a guided tour of La Alberca, where we were dazzled by hot-pink geraniums spilling over the rough balconies of half-timbered houses and disturbed by human skulls staring out of nichos in the ossuary of the 18th-century church. A granite statue of a pig is a homage to the local specialty, jamón bellota, cured ham from free-range black pigs that only eat foraged acorns. We also met the town’s adopted pig, which roams the narrow streets, being fed by the town residents, from July 13 to January 17, when it is raffled off, with the proceeds going to charity.

Because the schedule was so packed, we had little time for exploring on our own. However, volunteers can opt to provide their own transportation to the venue if they want to sightsee before or after their program. Local attractions include the nearby natural park of the Sierra de Francia and the “golden city” of Salamanca, known for its ancient university.

It’s not exactly a free holiday. I earned my way by talking and participating. Willingness to participate, converse, and listen is the main requirement for being selected as a volunteer. Regional accents are valued. If you are from the U.S. South, New York, Boston, U.K. (especially Scotland), Ireland, or Australia, you may have an advantage. Some programs have a waiting list, but because each group of volunteers needs to mirror the diversity of the students, you may be moved up quickly if your demographic is needed.

Of course, I enjoyed the food, the wine, the wild mid-week party, and the flaming quemada (a firelit brew whose concoction is a ritual to banish negativity, originated by the witches of Galicia).

But the biggest thrill was seeing the shy, tentative Spaniards gradually grow more confident as their English skills improved. Their appreciation on the final day was truly touching. For me, English immersions are about authentic connection with people from different cultures.

Months later, after I decided to relocate from Santa Fe, New Mexico, to Madrid, the friends I made at Pueblo Inglés came to my rescue, with creative solutions to bureaucratic catch-22s.

They invited me to stay in their homes when I arrived, and accompanied me on my search for an apartment. I could not have made the move without their help. For me, it was a life-changing experience.

Raúl Lobatón Sánchez, an engineer from Alicante and an Estación Inglesa alumni, quips, “The Anglos were, in my opinion, the most important part of the program. They gave us the opportunity to interact in English with people from different backgrounds and in many different situations. Never before was going for a beer so useful!”

Here’s a round-up of offerings:

Pueblo Inglés. You can participate in an eight-day program at two venues in La Alberca. It’s a jolly affair, with wine served with lunch and dinner. Founded in 2001, Pueblo Inglés has 1,279 programs under its belt, so it’s what you might call experienced.

And that shows: It counts on many devoted volunteers who return year after year. See: Diverbo.com.

“Pueblo Inglés is an unforgettable multicultural experience. I found myself connecting with Spaniards and Anglos with fascinating backgrounds and inspiring stories. I would recommend this to anyone who wants a true ‘off-the-beaten-path’ travel experience,” says Ashton Dorminvil. Ashton originally hails from Brooklyn, but he has taken the teaching experience to heart and is now living in Madrid, Spain, and works as a teacher.

Estación Inglesa. This is a six-day program that takes place either in the rustic, mountain-valley village of Barco de Ávila, two hours from Madrid, or at Parque de Monfragüe, in Extremadura.

“The best part of Estación Inglesa is how you see the nervous Spanish participants at the start of the course turn into confident individuals using English in all kinds of situations at the end,” says Lea Hook, an Englishman who now teaches English in Thailand.

“The facilities where the course takes place are excellent, with friendly staff, lovely hotel, and excellent food,” he says. The program was founded in 2009 and is expanding fast. Additional venues will be announced this year. See: Estacioninglesa.es.

VaughanTown. This six-day program has venues in Barco de Ávila; Aranjuez, near Toledo; a former palace in Cuenca; and Alcázar de San Juan, near the La Mancha city of Ciudad Real. “I’ve made many friends, both English speakers from around the world and native Spanish, as well,” says Hoke Thomas, a retired attorney from LaGrange, Georgia. “On each return visit, I continue contact with these wonderful Spanish friends. In fact, I am the American granduncle of Miguel, now age six, and of twins Diego and Daniel, age two.” VaughanTown also offers FiftyFifty, a five-day program, as well as DayTown, a one-day immersion in Madrid, Barcelona, and Valencia. See: Volunteers.grupovaughan.com.

Speak. With Speak, you get the chance to volunteer on an eight-day program at one of four stunning venues: an 11th-century abbey in Tuscany, a medieval castle in Piemonte, a fortified farm, and a Mediterranean estate in Puglia. Founded in 2017, the response to the program was so enthusiastic that volunteers were being waitlisted before the end of the first year.

“As time passes,” says Jude Evans, from London, “the group gets to know each other, and you have some in-depth, enlightening, and highly amusing conversations. I would say the element of cultural exchange is hugely rewarding. Both for the Anglos and the Italians—whether that’s discussing the inevitable political issues, philosophical questions, or more light-hearted affairs. I, for one, certainly learned some new Italian hand gestures!” See: Speakinitaly.com.

Englischhausen. A six-day program with venues in Laubach, Hessen, and Almuhltal Nature Park, Bavaria. “I’ve kept contact with people from the program and have made friends. For me, it’s especially fun meeting German entrepreneurs and business people from the U.K., Australia, and Canada,” says Terri J. Hofstetter, from Fort Worth, Texas. One-third of the openings are reserved for couples or friends traveling together. Complete your applications at the same time to increase your chances. See: Diverbo.com.

Angloville. It runs a seven-day program, with venues in Poland, Hungary, Czech Republic, and Romania. Volunteers share a room with one other volunteer. This one is perfect for teetotalers, since alcohol use is forbidden except after dinner, when participants may buy drinks at the bar. “The part of Angloville I enjoyed the most was meeting new people,” says Marshall Lentini of New York. “I feel like a country is the people who live there, not the buildings or things like that. Do it!” Founded in 2011, Angloville also offers discounted training for TEFL (Teaching English as a Foreign Language) certification. See: Angloville.com.